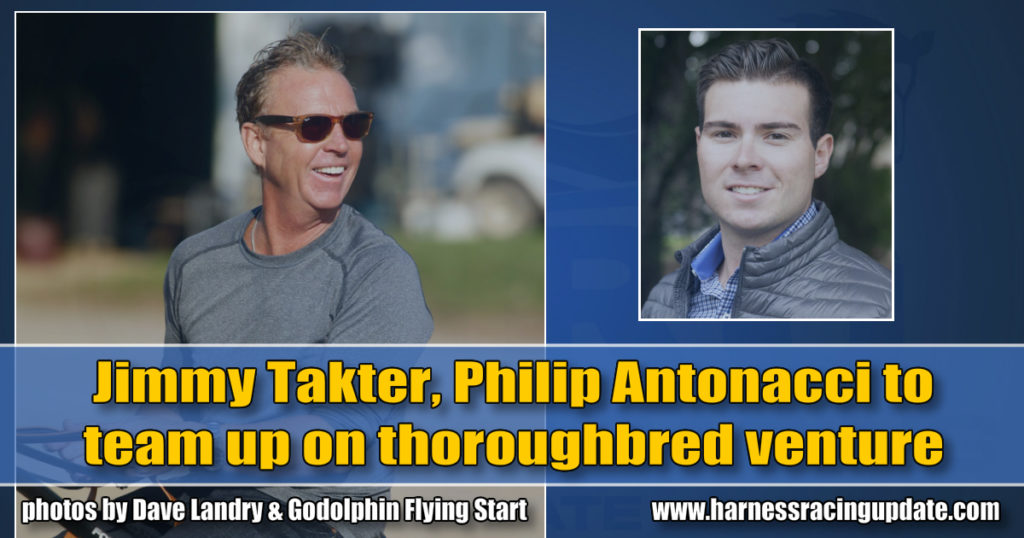 Jimmy Takter, Philip Antonacci to team up on thoroughbred venture

Jimmy Takter is ready to make his comeback, but it won’t be in harness racing.

The Hall of Fame trainer has joined forces with Philip Antonacci and the two will launch a thoroughbred stable later this year. Antonacci, 25, will be listed as the head trainer, but Takter’s role will be a major one, so much so that Antonacci described the relationship as a partnership.

“Philip is a very bright young man, he has been all over and his background is in this sport,” Takter said. “But he has never had a stable of his own before. That’s where I can help him. I will be his wing man.”

With Antonacci down as the head trainer, Takter won’t have to deal with the paperwork and the operational and administrative parts of the job that he was eager to do away with when leaving harness racing.

Though Antonacci was raised in a harness racing family, his passion became thoroughbreds. He has worked for several top thoroughbred trainers and helped manage Lindy Farms’ modest-sized thoroughbred division. It has long been his desire to go into training thoroughbreds. Meanwhile, Takter was looking for new challenges in his life. That’s what brought the two together in what Antonacci calls a “perfect marriage.”

“Simply put, Jimmy Takter is one of the great horsemen in the world,” Antonacci said. “He has a completely unique connection with the horses and his stats speak for themselves. Four Hambletonians, six Hambletonian Oaks, 34 Breeders Crowns, those are unfathomable statistics. He is one of those guys who, even though he was so successful every year, was always looking to make changes or modify something that would give him an advantage moving forward. He is a fast learner and is someone who can adapt.”

The plan is to start off with 15 horses based out of the Payson Park training center in Florida. Most will be owned by the Antonacci family, but Philip said his will be a public stable that will look to pick up new clients. He expects to make his first start at the championship meet at Gulfstream Park.

Wesley Ward currently trains most of the Antonaccis’ thoroughbreds and will keep those horses. The Antonacci-Takter stable will be made up of 10 or so horses that are now yearlings, plus a handful of new, older horses they bring in.

They picked up their first horse Thursday when paying $42,000 at the Fasig-Tipton yearling sale for a colt by the stallion Hard Spun.

The thoroughbred operation will mark Takter’s first direct contact with a stable since he announced his retirement at age 58 in 2018. He said what brought him back is his passion for the animal.

“You miss the horses,” he said. “Horses have been my life. It’s so important to me to be around horses I really began to miss them.”

Takter could have returned to harness racing and would not have had any problems rebuilding his business, but he said he was looking for new challenges.

Two of thoroughbred racing’s most successful trainers, Bob Baffert and Wayne Lukas, started out with a different breed, quarter horses. In modern times, perhaps the best known examples of standardbred trainers making the switch to the runners are Don Swick andNorm McKnight, a leading trainer at Woodbine Racetrack in Toronto.

Other than those two, there have been few trainers make the jump from standardbreds.

Taker acknowledged that there will be a learning curve, but also felt that there were areas where the job wouldn’t be that different than when he trained standardbreds.

“I am a great conditioner of standardbreds,” he said. “I know they are totally different horses but you have to condition these horses. The main thing is to build up a strong horse and you have to try to figure out a way to develop them without any injuries.”

Another key to success, he said, is to develop a horse mentally.

“I’m a strong believer that the mind of a horse is very important,” he said. “The thoroughbreds are more hyper and stronger animals. You have to work on their minds and build them as strong as possible in that area, as well.”

When it comes to the sales, Takter knows that he still has a lot to learn when it comes to thoroughbred pedigrees and will let Antonacci focus on that area. His responsibilities will include sizing up the horse as an athlete, something he proved to be quite adept with while training standardbreds.

“Conformation is a big factor,” he said. “These horses are way, way more beautiful horses than our horses. Their bodies are unbelievable. You don’t see standardbreds like that. We don’t have the wallet like some big stables have. We might have to buy horses that have some mistakes but you think you can live with them.”

At the start, the Antonacci-Takter team won’t have the type of firepower Takter had when training harness horses. They want to keep the stable small and say that their owners aren’t the types to spend lavishly at the sales. But Takter is not doing this to be part of a stable that operates in obscurity. Always brimming with confidence, Takter is setting loft goals.

“To win a Triple Crown race or a Breeders’ Cup would be a huge step forward,” Takter said. “I understand you need the material for that. But I’m not going into this just to participate,. I am going into it to try to compere. Of course, it is our goal to compete in those big races.”