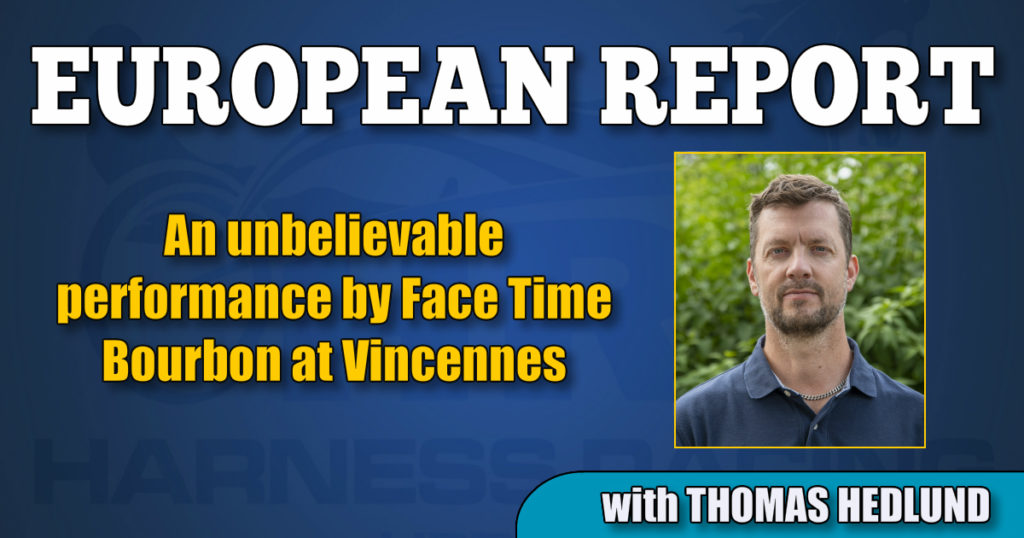 An unbelievable performance by Face Time Bourbon at Vincennes

Face Time Bourbon was impressive again in his latest start, this time setting a 1:51.3 (mile rate) world record while winning Saturday’s (Sept. 12) $201,000 Prix de l’Etoile over 1.3 miles at Vincennes in Paris in a race featuring four 3-year-olds and four 5-year-olds, where the older gang started 50 meters behind the youngsters.

His driver, Björn Goop, knew that he had at least two great 3-year-olds to beat 50 meters in front of him and the Swedish driver acted quickly aiming for a position in front of the field, just as the toughest opponent, Feliciano, found a spot behind the big favorite.

Midway through the race, Face Time Bourbon was pushed to the front and the pace was high. Sébastien Guarato’s 5-year-old passed the first mile in 1:51.3 and then another quarter of a mile remained. Goop looked extremely confident over the stretch and Face Time Bourbon kept the same pace all the way towards the wire.

This was Flamme de Goutier’s first attempt under saddle and Antoine Wiels was entrusted on the mare, who accounted for a strong last 600 meters finish and mile rate 1:57 over 3,000 meters (approximately 1.9 miles) is nothing but strong.

The $187,500 Kriterium for 3-year-old mares was one of the most prestigious races on Bjerke racetrack’s card on Saturday afternoon. Frode Hamre trained Jolene B.R. (Muscle Hill—Cantabs Gal) left quickly behind the gate and driver Vidar Hop opted a pocket trip behind leader Devious, a position that became successful, even if Jodie B.R. got really close at the end.

Saturday’s race card featured races for mares. The colts and geldings will join up at Bjerke racetrack today (Sep13).