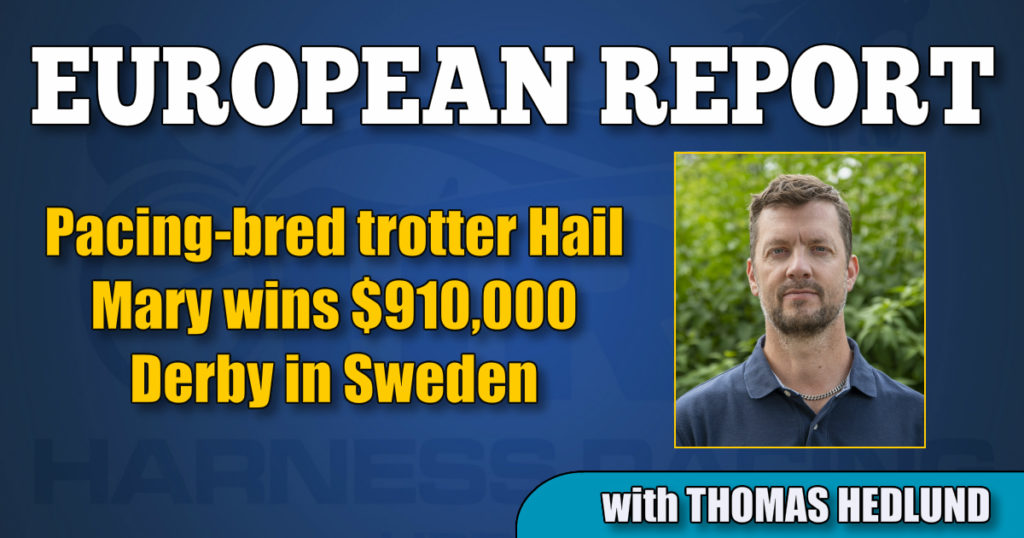 Four Googoo Gaagaa offsprings and one contender out of pacer mare Kissed By The West were gathered around the Jägersro racetrack in Malmö, Sweden on Sunday afternoon (Sept. 6) and a pacing-bred trotter did indeed win one of the biggest races in Europe.

Googoo Gaagaa son Power won the $910,000 Svenskt Travkriterium last year, as a 3-year-old and Robert Bergh’s horse was one of the elimination winners ahead of the Derby this year.

But Bergh also had Hail Mary (Googoo Gaagaa—Dream U.S., by Victory Dream-Nan’s Catch) in the field of 12 horses on Sunday afternoon and Hail Mary became Bergh’s choice when the drivers decision had to be made among his three finalists. The story of Hail Mary as a racehorse took its serious start in Gävle on Aug. 22 last year. Not an early horse thus, but Bergh was very clear that he had something extra in the barn after the convincing debut win that day in August.

“Yes, I knew that I had two really great Googoo Gaagaa colts in my stable and Hail Mary hasn’t done anything wrong after that day,” said Bergh.

The funny thing about Aug. 22 in Gävle is that another, then lower-classed trotter made his third start at that track, and won. Don Fanucci Zet (Hard Livin—Kissed By The West) grabbed his third consecutive win that day and if someone would have said that two of the favorites in the Derby 2020 showed off on that very day, probably no one would have taken that statement seriously.

But the fact is that Hail Mary and Don Fanucci Zet were the horses that fought for victory and glory when the Derby field turned for home on Sunday afternoon.

Hail Mary and Robert Bergh managed to keep the lead from post 1, even if Wim Paal and Usain Töll begged for the front position after a quarter of a mile. That situation was quickly solved by Bergh, who let Usain Töll pass Hail Mary whereupon Bergh again claimed the lead with two laps to go in the 1.6 miles long Derby.

Don Fanucci Zet attacked three wide midway through the race and landed outside of Hail Mary with a little more than 5/8ths of a mile to go. These two horses seemed to leave the rest of the gang in the last turn and pretty soon it was understood that Hail Mary was the stronger one this day. Bergh, a three-time Derby winner ahead of Sunday’s edition, noted that his horse was better than the rest and Hail Mary came home in a mile rate 1:57.1.

Don Fanucci Zet held to second place ahead of splendid finisher Aetos Kronos (Bold Eagle). Aetos Kronos had at least 20 meters to pick up from last position when the home stretch was close and much credits are delivered to the top three in the Derby 2020.

”I’m very proud of Hail Mary and it feels so good that he and we can look back in the books and see his name after a victory in a race like this. I really wanted him to win so he could show what a great horse he is. For me as a trainer I’m pleased with the whole journey with him, the plans we’ve made along the way and most of all it feels nice to know that I won with a horse that raced with shoes, with an open bridle and in an ordinary sulky. We haven’t pushed to this victory, but just letting him being a horse”, said Bergh after his fourth triumph in the Derby.

Daniel Redén’s Diana Zet had been the queen of the 2016 born crop ahead of the $456,500 Derbystoet for 4-year-old mares at Jägersro on Sunday afternoon. The $225,000 Drottningpokalen, $545,000 Stochampionatet and $456,500 Derbystoet are the biggest races for 4-year-old mares in Sweden and after the race at Jägersro, no one needed to question who’s the best mare in the crop since Diana Zet held stablemate Milady Grace behind her in a quick finish. Örjan Kihlström pushed Diana Zet to the lead and hit the front after 600 meters, when third stablemate Alaska Kronos needed cover after a rapid start for Carl Johan Jepson.

When Milady Grace connected as first on the outside, Redén’s fourth finalist, Award Kronos, was given a second over trip for Adrian Kolgjini.

With four Redén horses in front, the race was locked and the attacks three wide from horses in the back of the field during the race’s last half mile became too tough since the last quarter of a mile was quick, :27.2 for the two horses in front.

Diana Zet lost her gait and nearly made a break with 50 meters to go, but Kihlström solved the situation and the Hard Livin mare held a brave Milady Grace behind her in a mile rate of 1:57 over 1.3 miles.

Redén didn’t just grab the gold and silver in Derbystoet, but also the bronze medal since Alaska Kronos finished third after a trip behind the leader. Grande Diva Sisu made a strong effort as fourth from third over and broke Redén’s dominance in the race. Award Kronos finished fifth and the outcome couldn’t have been much better for Daniel Redén.

”It’s very unclear everything right now. I don’t know if Diana Zet broke before the wire and in that case we’ve won anyway,” said Redén directly after the race, before he knew if Diana Zet had won the race.

“Diana is just incredible. At home, when we train her, she’s just not so interested and it’s pretty impressive of her to win all these big races since she was a 3-year-old. Unfortunately she lost her gait after the wire and she got injured at that moment, so she will most probably stay out of competition for the rest of the year.”

Alessandro Gocciadoro is practically unstoppable in his homeland Italy and on Saturday night he claimed $213,000 Campionato Europeo in Cesena.

Campionato Europeo is a two-heat race and Vernissage Grif had no problem in winning both races. The first heat became a one man show when the 6-year-old Varenne son won in 1:54.2 while runner up Arazi Boko came home in 1:55.4.

1:55.1 was the winner time in heat two and Vernissage Grif made Campionato Europeo to his own race in the Italian night.

Holger Ehlert trained Barbaresco Grif (Conway Hall), driven by Enrico Bellei, won the $235,750 Gran Premio Nazionale in Milan on Sunday afternoon after a trip third on the inside. Barbaresco Grif finished strongly when Enrico Bellei found space between horses and the duo won in mile rate 1:56 over 1.3 miles.