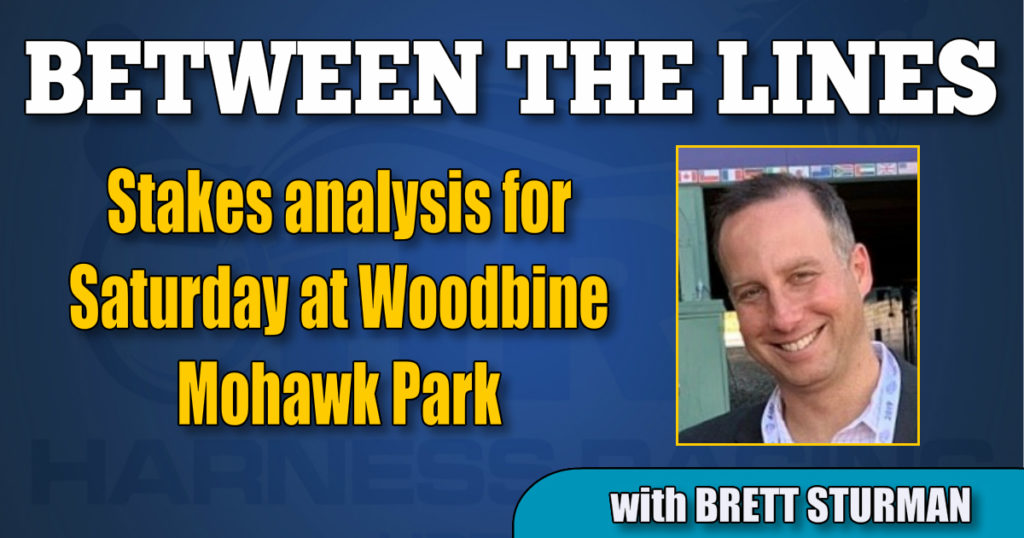 For as good as last week’s North America card was that handled in excess of $5 million, Saturday’s Woodbine Mohawk card may be an even better follow up from top to bottom. Here’s how I see all of the night’s stakes races.

DESPERATE MAN was well gapped off cover around the final turn last week in a similar Gold division as this one but found his best stride when it counted and ended up winning going away. That 1:51.2 time was a best for the unbeaten Shadow Play colt and no one else in this field is yet to go as quick; only knock is that it’s possible he gets away last in this six-horse field. LAWLESS SHADOW made the lead early and just lasted to win his Nassagaweya division with a host of others closing in; going right to the front again. BETTOR SUN had it his own way last out but tired in the lane after having some separation.

BEACH SPORTS was buried through most of the mile in her Fan Hanover elimination and even through the stretch still had traffic woes. She had no shot in the Fan Hanover final but this a spot she can do some damage in. LAURA’S LOVE took some action last week after she kicked home in :25.1 the week prior; never really got close though in a brief first over bid into Party Girl Hill. BETALADY gave way from the pocket when last seen to Peaky Sneaky. ROSE RUN VINTAGE was a 1:51 winner two back.

I’ll take a swing here with PLAY TRIX ON ME. It looked like Jamieson wanted to get out at around the five-eighths but couldn’t and then had to wait until the stretch to do so. He was gaining late into a partially wrapped up winner in an elimination that went nearly two full seconds quicker than the other. Gets a new driver as Jamieson goes to the Jamieson-trained HOT WHEELZ. READY FOR MONI won his elimination at 5 cents on the dollar and looms a heavy favorite to take home Goodtimes glory.

Both races tonight for the top older horses are wide open, starting with this one. A week after I picked him in a race where he may have won if not for breaking, GUARDIAN ANGEL AS came back to win next out at Tioga at odds of 12-1 — figures. The odds will now be diminished but I still like that one. In that race at Tioga, favorite GIMPANZEE had to grind first over but couldn’t reach; that race was his first defeat of the year. ATLANTA tired two back at the Meadowlands and then made an uncharacteristic break here last week; not necessarily an easy call. The same can be said for rival MANCHEGO. With Dunn not here, she gets a new driver in Roy and an aggressive try will be coming. SOUL STRONG may attract some attention on the move to the inside but still needs to prove it. LINDY THE GREAT is always in the mix.

In the other Gold division for freshman pacers, CANDY TRADER closed from out of the clouds to just miss in the Nassagaweya. He’s been a tough luck horse of sorts early in his career but looks to be worth a shot here at a price. BULLDOG HANOVER won his Gold sire stakes race last out by three lengths and was flattered when the second finisher from that race came back to win next out in a 2YO open stakes here. Likely the one to beat. UCANTTOUCHTHIS was closing right with the top choice last week; that was a nice bounce back mile following his tiring first-over try prior. CONTROL HEAVEN steps up after a sharp win on debut.

THE DEVILS OWN N invaded Woodbine Mohawk two back to the tune of a 1:48 mile. He couldn’t replicate that performance last out against the likes of Sintra, but he rates kindly against this field. WESTERN JOE went first over against a strong Burke trainee at Chester and did well to hold for second in a fast 1:48:4 mile. Speaking of Burke, COVERED BRIDGE makes his first start in nearly two months. Fast if right, he was second to Dancin Lou earlier in the summer at the Meadowlands. EAST END has raced big in his last pair but now moves to the outside after having the pole for his last two; price will be there.

WARRAWEE VITAL comes off a fast win in just his third start since January; could be a serious colt. BEAUMOND HANOVER had his four-race win streak derailed in his North America Cup elimination when flushed out to go first over against Tall Dark Stranger. He hung in there fairly well before giving way late and now it’s back to a familiar and successful level as the favorite. ANETO chased the latter two back from the pocket but couldn’t gain; will be forwardly placed. CAPTAIN NEMO was thought early last year to be one of the best 2-year-olds at the time. Won last out in his third start from the yearlong layoff.

You might as well throw a dart at this one; an honest case could be made for every horse in here. As a tepid top choice, BACKSTREET SHADOW exits a fast mile and won over one of the contenders and recent form from the Meadowlands was hinting at that type of mile. CENTURY FARROH was my pick to win the Dan Patch and it looked impossible for him to get there in the final stages, but he did. Can repeat but will need things to work out. BETTOR’S WISH should get made the favorite from the rail; all recent races are strong. I was surprised DANCIN LOU didn’t at least leave in his race here last week in the Preferred; I’m inclined to think he might not be as sharp as he was earlier when winning the Haughton. DORSODURO HANOVER has been overlooked much of the year, but he shows up almost every race; overdue for some luck. AMERICAN HISTORY won here in 1:48.4 two back but is hit or miss.

I don’t know if I’d go as far to say this is now or never for ALICORN, but for a filly that made over $500k last year she hasn’t yet been able to find that same gear. She closed belatedly two back in that quick mile from Peaky Sneaky, will have every chance to win. KARMA SEELSTER outraced her odds throughout the Fan Hanover and actually beat ALICORN four back SEX APPEAL was a monster in June but has been off for the past month following a disappointing race.

McClure made the right call last week going into the North America Cup with TATTOO ARTIST and gave it a good try in being second to Tall Dark Stranger. The former is now the one to beat. The two Alagna Captains are just 1 for 15 on the year combined, though CAPTAIN BARBOSSA gets a more realistic chance to threaten and I think may offer more value than CAPT MIDNIGHT. BEACH BLANKET BOOK nearly beat TATTOO ARTIST four back; that should count for something.

TrackMaster PPs for the stakes on the card available here.