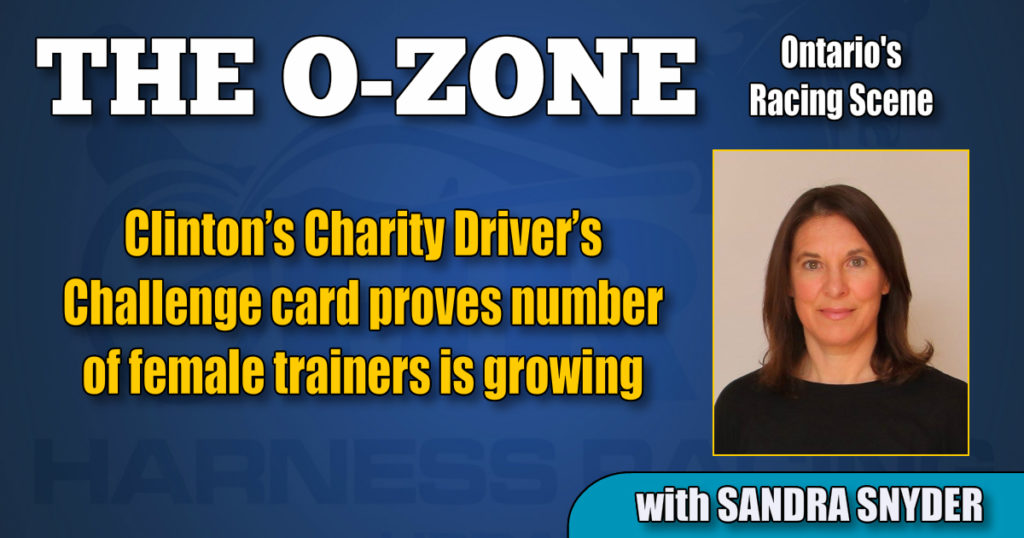 This Sunday (Sept. 6) Clinton Raceway will wrap up its 2020 season with the 40th annual Charity Driver’s Challenge.

In the 12 races on the program, four of them Ontario Sires Stakes (OSS) Grassroots divisions for the 2-year-old pacing fillies, eight female trainers will send out a total of 10 horses, including five starters in the OSS divisions. Although not an overwhelming number (95 horses will go postward on the card), it does reflect the growing number of female trainers both in the industry and the Clinton training ranks. In the 20th edition of the Charity Driver’s Challenge on Sept. 3, 2000, just four women sent out starters and none of them were in the 3-year-old pacing colt Grassroots divisions.

“It definitely seems to be something that’s grown,” said trainer and Racing Under Saddle rider Natalie Elliott, who is stabled at Clinton Raceway. “I think Racing Under Saddle can contribute to that a bit, just giving women more front and centre sort of status when we’re out on the track. And then Natasha Day being here driving has really helped, I think, a lot of even smaller trainers that want to get their driver’s license to drive their own horses, just to build their confidence. Having Natasha in Canada has helped that.”

Sarah Cuthbertson | Trainer Kendall Rahn (competing in Racing Under Saddle with Brydown Houston) will send out two horses at Clinton on Sunday.

Elliott, a first generation participant who was introduced to harness racing as a pre-teen by trainer Frank MacDonald, will not have a starter on Sunday’s card. She currently trains two horses, 11-year-old Pegasus Spur gelding Thor Seelster, who will race at Hiawatha Horse Park on Saturday, and homebred 2-year-old Holiday Road colt Heavy Dude E, who has yet to make his racing debut.

“That’s probably all I’m ever going to have, just a little bit of fun,” said Elliott, who combines training trotters with a full-time dog grooming business. “Maybe down the road, retirement age, I’d get a little more into it when I didn’t have much else to do, but for now all it’s going to be is just a couple.”

Heather Pickett, on the other hand, will start two horses on Sunday’s program. Homebred 2-year-old pacing colt One Drink Ago (Your Nemesis–Dynamic Date) goes postward in non-winners of $2,000 action in Race 5 and freshman pacing filly KD Roses (Shadow Play–Coloure De Lira) makes her OSS debut in the first $22,800 Grassroots division.

The freshman duo are half of the current residents in Pickett’s shed row at Clinton, but she expects that number to triple before winter arrives.

“Right now I have only four in the barn, because I’ve got some 2-year-olds that got turned out, but with babies and the ones coming back in in the fall, I’ll probably be back up to 10 or 12 for the winter,” said Pickett. “We’ve got a few mares that I’m breeding now, so the first homebred came in last fall and I’ve got his brother coming in this fall and another homebred coming in this fall. Then one of the guys I train for, Murray Bradshaw, he’s starting to breed a couple mares as well.”

Developing young pacers and trotters is where Pickett prefers to dedicate her energy, especially those at the economical end of the spectrum. One of her favorite horses is Royal Mattjesty daughter Zip Car, a $1,000 yearling purchase who went on to earnings of $152,448. Another of Pickett’s former stars is $250,353 winner Goldstar Badlands and in 2019 she bred Zip Car to the son of Badlands Hanover.

“I know it’s sort of an out of the box idea, but you’ve got to try some things right, so I’m excited about her,” said Pickett, who got her first exposure to standardbreds prepping yearlings at Glengate Farms and spent six years working in the Clinton Raceway test barn before obtaining her trainer’s license a decade ago. “She’s already got a really unique personality, so that’s exciting. She’s pretty funny, the day the kids met her the first time she just let the kids all lie down with her and play with her.”

Although her name will not appear on the program page, Clinton resident Kendall Rahn will also send two horses onto the track Sunday. Rahn works alongside Randy Henry on her family’s Brydown Farms horses and hopes to have ‘Trainer’ listed on her resume by the time Top Royal and Brydown Lilibet make their 2021 Clinton debut.

“That is definitely one of my goals, it’s on the list,” said Rahn, who recently transitioned into harness racing from the hunter-jumper show world. “I’m still kind of seeing where it goes, but I do really like working with our own ones that we’ve raised and seeing them progress. It’s really rewarding.”

“The two that I’ve worked the longest with right now are Top Royal and Blakes Boy,” said Rahn, who also qualified as Racing Under Saddle rider this year. “Just racing those ones have taught me a lot; working with them every day.”

Pam Forgie helped Rahn secure her RUS rider’s license and said it has been an enjoyable process watching the future trainer soak up knowledge.

“Just watching her learn from Randy and everything over the winter has been interesting, to see the change,” said Forgie. “It’s nice to see it too, because I know she wants to do it and get into it, and when you have the drive it’s great.”

Forgie’s own resume currently includes ‘Trainer’ and ‘RUS rider’ and it will soon see ‘Driver’ added back to the list.

“I’m nine points away from getting my driver’s license. I did the Mildred Williams Series, god that would be 15 years ago I guess I had my driver’s license, so I just decided I was going to get it back,” she said. “Sometimes you end up at the smaller tracks and it kind of gets slim pickings after the races to find somebody to qualify your horse, or even going to London Friday mornings getting somebody to come, so sometimes it’s nice if you have your license. You don’t have to worry about it; you know the horse, just get on and go.”

Forgie grew up with standardbreds. Her father Dave Wilkinson trained and drove his own horses, and she has always been involved in some aspect of the business. Four years ago she and partner Mike Dimmers decided to expand their involvement. Their operation, based at a barn just behind Clinton Raceway, currently numbers around 20 horses which range in age from 13-year-old Ken Warkentin gelding Schrader Hanover to 2-year-old Royalty For Life gelding Lifelong Wish, and includes claimers and conditioned horses, pacers and trotters.

“We’ve been together for about five years and kind of decided to do more with the training about four years ago. We’ve kind of given up our other side jobs and gotten more involved full-time training horses,” explained Forgie. “It’s been going really good since then. We’ve had some nice horses, and bought and sold some nice horses. Had a little bit of luck in the Sires Stakes last year with Royal Esteem and then this year with Lifelong Wish.”