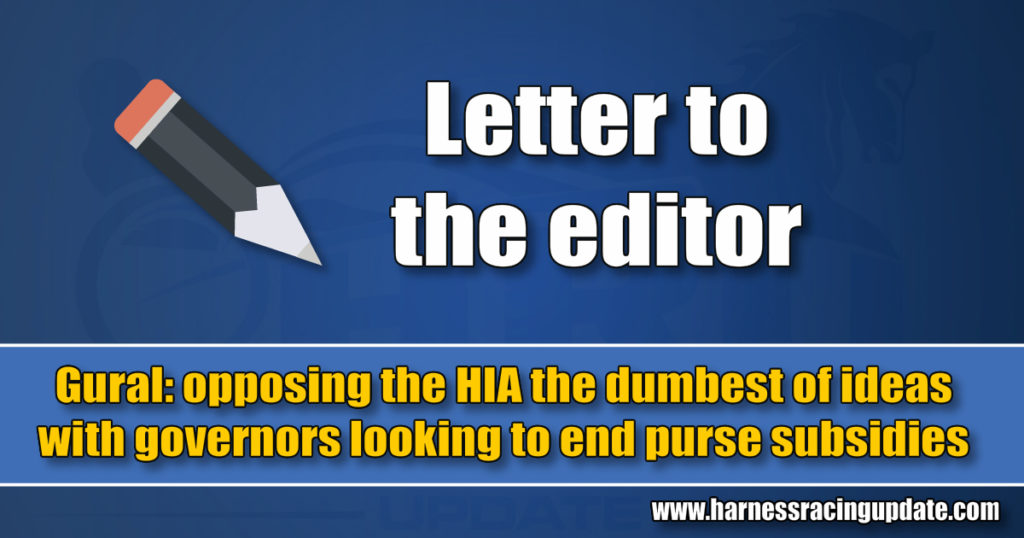 Gural: opposing the HIA the dumbest of ideas with governors looking to end purse subsidies

Letter to the editor from Jeff Gural, owner of the Meadowlands, Tioga and Vernon Downs

Of all the dumb ideas I have heard, the decision by the USTA to oppose the Horseracing Integrity Act (HIA), that I expect will be passed in Washington, might be the dumbest. Thanks to my efforts, along with (my security chief) Brice (Cote) and The Jockey Club, we just had 29 individuals arrested based on information obtained by the FBI relating to the illegal drugging of horses. I believe all but two of the individuals were related to standardbred racing and were it not for the virus I am sure there would have been many more arrests. Hopefully there still will be once things settle down.

I have always tried to do right by the horsemen, including opening my three racetracks as quickly as possible after lobbying on my part to allow us to open. I did not cancel any of the stakes races, I just funded the shortfall. As you might expect, I have lost a lot of money this year especially in New York.

When I first saw that the USTA was planning to oppose the legislation I tried to warn (USTA president) Russell (Williams) that a scandal was coming and that we were going to look foolish and his response was to shut up. The chairman of the USTA employed one of the trainers who was arrested and one of the others was the leading trainer at Yonkers.

How in the world are we supposed to try to convince the governors and legislators in the various states that are now facing huge deficits that they should continue to fund our purses if they realize that the thoroughbreds and the quarter horse industry have now turned drug testing over to the feds while standardbreds have resisted? Can anything look worse?

I asked Russell what he objected to in the legislation and if I agree with him I would get it changed. Many of his objections are valid but I am sure we could negotiate.

The optics of opposing this legislation and at the same time trying to hang on to the purse subsidies are insane.

I know one thing if we do not change our position I am simply going to drop all the stakes at my tracks because I have not gone to all this trouble and lost all this money to provide a place for dishonest people to race.

We need to do everything possible to put us in a position to convince the governors of New York, New Jersey and Pennsylvania to continue with the purse subsidies. As we know, the governor of New Jersey has eliminated it, the governor of Pennsylvania wants to eliminate part of it and I can tell you that the other casinos owners in New York all plan to ask the state to decouple. We could literally be looking at the end of the sport as we know it and the last thing we need is to give them a reason since most people think we have always had a problem with integrity going back to when I first got involved in the ‘60s and everybody thought the drivers were playing games.

I urge our members to reach out to Russell and make it clear that we need this purse subsidy and we do not need to give anyone a reason to take it away. We all know we are not capable of regulating ourselves, nor are the states capable. It requires far greater scrutiny and I am sure we can make the changes we need in the legislation to make it work.