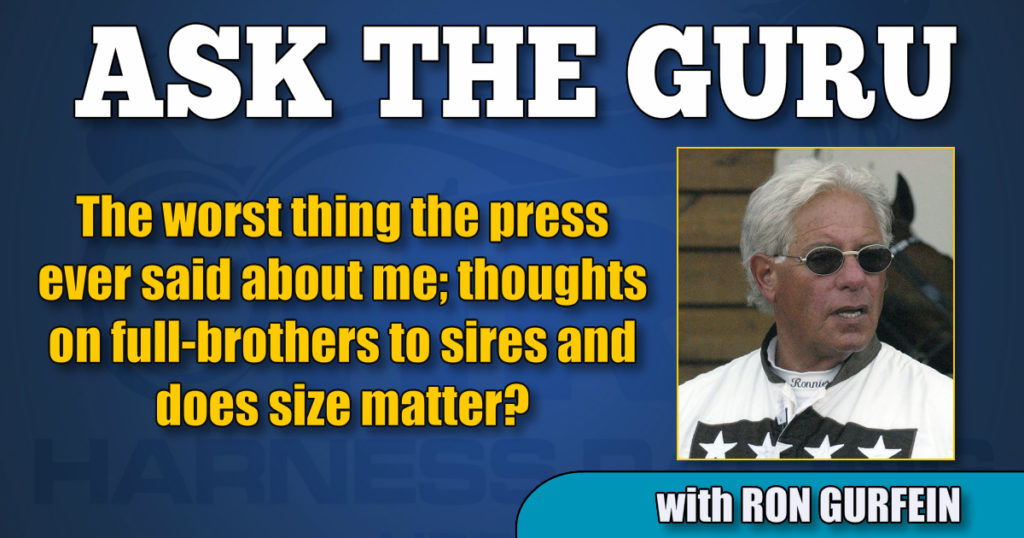 The worst thing the press ever said about me; thoughts on full-brothers to sires and does size matter?

All this and much more in the latest edition of harness racing’s most popular advice column.

Tidbits: If you are a fan of social media you may find it hard to believe that the harness horse community is filled with bright, thoughtful and generous people. It may surprise you, but the base of these people have little or no use for social media.

Our daily lives have been filled with news and discussions of death, sickness, politics and finance.

Let’s put all of this on the back burner and discuss how we can help our friends neighbors and coworkers. Race results pale in comparison to loneliness.

My generation, although considered more susceptible to the virus, is more at home staying at home than our more youthful counterparts. As long as we have sports, books, movies and alcohol we will be okay. On the other hand, those younger and without a partner have little chance to safely find their way to mixed company or any company to be perfectly politically correct.

COVID-19 has been successful in taking a major part of their life away for at least a half of a year so far and only God knows how long they are in for.

I am not saying go out and throw a party. I suggest that if you are close to a person that do to present circumstances is without adult companionship it would be advantageous to their situation if you would invite them for any kind of interaction be it lunch, dinner or a game of golf or tennis. Loneliness can lead to severe mental distress.

This message was precipitated by a chance meeting I had yesterday at a restaurant with a beautiful young single mom while I was waiting for a takeout order. Just the sadness in her voice describing that lack of contact due to health and rules constraints made me aware of the severe troubled times that were evident in this generation of young adults.

All I can say is if you can help please do so.

The Meadowlands is on a short vacation but the Takter/Alagna train just keeps on rolling. As the train headed north and west Nancy won the Zweig at Tioga with the talented Ready For Money and Tony won the filly division with the amazing Ramona Hill. On the same weekend, they split winning the two eliminations of the Pepsi North America Cup with Tall Dark Stranger and Captain Kirk. Those two plus a fabulous card Saturday night at Mohawk await you.

I can’t wait to see the showdowns on the blazing fast oval called the Red Mile.

How about a little applause for my generation. Three fellows that have devoted their lives and money to the sport have unveiled the national season champion 2-year-old pacing colt Perfect Sting, owned and bred by George Segal and Marty Granoff and trained by trainer Joe Holloway, who also trained Shebestingin the dam of the colt. The sire Always B Miki is having a banner freshman year. The time at the Red Mile of 1:49.2 was nothing short of amazing.

Because Churchill Downs had an audible at the line of scrimmage and decided to eliminate spectators from the Derby, I have received numerous queries as to what the protocol at the Red Mile will be.

Once again I spoke to Shannon Cobb who assured me they are doing all they can to insure we have a live audience (although limited) for both the finals of the Kentucky Sires Stakes and the Grand Circuit meet. I will keep you informed as more definitive information rolls in.

Disaster struck the Swedish Yearling Sale last week. As of this writing the sale of more than 100 superbly bred trotting yearlings has been postponed to the Thursday before this column appears as related to me by Lina Alm. Originally slated for Tuesday the 18th, the online sale website crashed and the format was moved to Sunday the 23rd at 5 p.m. Lina tells me that approximately one hour previous to the opening the site crashed again. I personally tried to get on the site all day Sunday to no avail. Hopefully this third attempt will be a charm. It is of major importance to Swedish breeders and buyers alike.

In regard to last week’s column about women drivers, I would like to take a moment to thank Bill Hutchison for sending me some pertinent information on women drivers in Australia. According to Bill at least 25 per cent of the drivers in his country are female. He goes on to say “Kerry’s Manning is a Caduceus Club inductee and a living legend here in Melbourne. There is no doubt that she is the greatest of her sex — ever.”

Seth Langson asks: No racism in Harness Racing? I suggest you visit harness racing website “XXXXXXXXXXX” a place where the posters are owners, trainers and others in the harness racing business. It is a cesspool of hate.

I purposely left out the name because it is nothing but a rag. You don’t know that owners and drivers and trainers are the ones spewing that filth. Why do you think the people are so wanton because it is 99 per cent anonymous.

Please don’t waste your time with that idiocy there are bad apples in every bunch thank god we separated them all into one basket that landed far from the eastern shore.

Personally, I have heard way more hate and racist comments from non-horse people on social media.

Phillip DesJardins asks: What is the worst thing said in the press about you that you can remember?

In the early ‘90s Mary Ann Wall, who was a top sports writer for the Lexington Herald Leader, did an interview with me at the Red Mile. It was quite evident early on that she was no more interested in our races or standardbred horsemen for that matter as I am in politics in Montana. I was as polite as can be as her tone deepened.

I walked away from the interview thinking it was far from my harshest experience with the press. Unfortunately, the next day in her column she referred to me as the Bobby Knight of harness racing. I happened to like Bobby Knight but the comment was far from complimentary on her part.

Bob Carson asks: I remember your yearling purchases for the most part were always on the larger side yet in your last years of training when your stable numbered a half dozen most of the best babies were very small. For example Delicious and Lucy’s Pearl. Can you explain?

It’s sale time once again and I literally could write a book on the subject. Before going on I must say that I cannot take credit for the purchase of Delicious. If I remember correctly a group of young guys in Illinois, the Quaid brothers and Jim Bafia ,came up up with a computer driven system to select yearlings and purchased the filly from Lindy Farms, her breeder, for $8,000.

I did buy Lucy’s Pearl from Brittany Farm with a push from Art Zubrod for $23,000. Size matters, she was so small you can’t imagine. Trust me that’s the only reason she was for sale.

Back to the original question. I really believe that in a match race two horses of basically equal pedigree the big one will beat the little one 80 per cent of the time. It is simple physics the bigger will need to take fewer steps in the mile to cover the same distance, but will lose when the smaller ones legs move that much faster.

There was a method to my madness. Many trainers made lots more money than I did with individual horses because of the fact that I was stuck on the big horse theory. But few trainers had as much success in classic races for the same reason.

Jimmy Takter, to me the best horse trainer that I have seen in my lifetime, is a great example. The cash register never stopped. True, you may say he had numbers. But his numbers were mostly medium to small sized horses. One, they come to their speed faster and two, they stay sounder. Those factors alone result in more money on their cards.

Let’s take my two best colts for example. Victory Dream and Self Possessed. Neither reached anywhere near their full potential at two. Neither was easy to keep sound. Both were great 3-year-olds and both were very big horses. The same could be said about Continentalvictory, although she was always sound till the debacle at the Red Mile which is entirely my own fault. She was a huge filly, more like a stud colt.

It is sale time now so if you are a buyer keep this in mind: If you are looking for a home run and don’t worry about the money go big, if you want that cash register to ring week to week go small.

Tom Santoro asks: I read that the million-dollar trotter Maverick made his debut a winning one. My question are you a fan of a horse being a full-brother of a sire. I noticed that most full-brothers don’t pan out. Did you ever purchase a full-brother to a sire?

To begin with not very often is there a full-brother to an established sire available for sale. With the average foal count in mind a mare would be on in years for that to happen. I don’t think that siblings ability should be the sole criteria for buying a colt.

To me performance is equally or maybe more important. I rate three colts out of every 100 I look at as top individuals. So it would be a major coincidence for a brother to a sire to fill the bill. However, the year is 2019 and VOILA!!!! My top selection in the draft was Goodashim Hanover hip #164 at the Harrisburg sale. Not the brother to one sire but the brother to three sires. Now named simply Goodashim, he is a brother to Father Patrick, Pastor Stephen and Whom Shall I Fear, all standing in stud as I write this column. I priced him at Hanover at $425,000 and my client Lindy Farms purchased him for $240,000. Not quite a bargain yet but he is a very big colt and I don’t expect him to show his entire potential till his 3-year-old campaign.

He did break his maiden this week winning a Stallion Series event in fine fashion at Pocono Downs. Stay tuned.

Thanks to all of you for the kind words. Big races continue this weekend with some major events north of the border. We will once again have the pleasure of watching the Nancy Show, with the magnificent Tall Dark Stranger at work in the final of the Pepsi North America Cup and Ready For Moni doing battle in an elimination of the Goodtimes tonight (Aug. 28). Also on tap will be the Chris Ryder trained Party Girl Hill, the undefeated daughter of Captaintreacherous seeking win number eight in the Fan Hanover. All this at Woodbine Mohawk Park. Please enjoy all the weekend festivities and have a wonderful week.