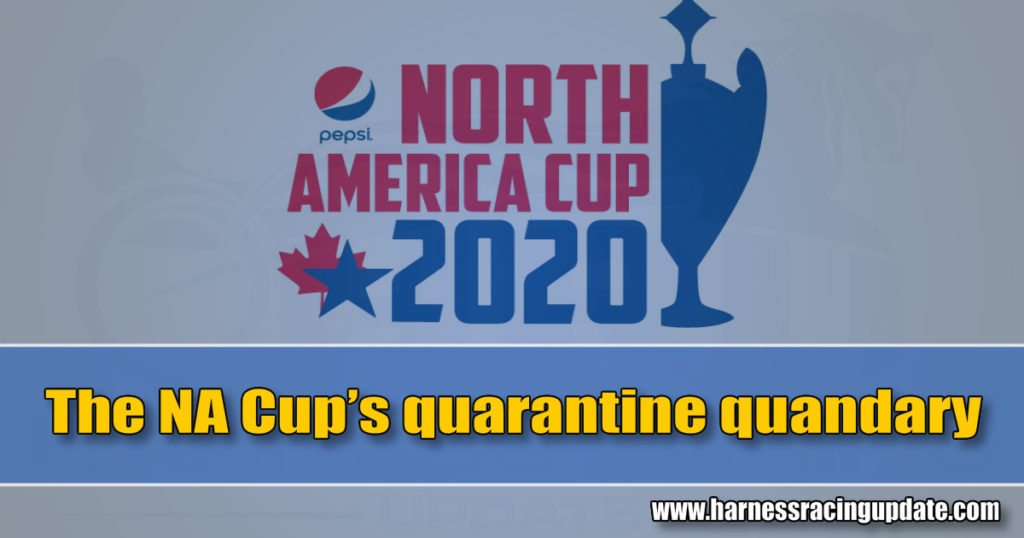 What happens when a virtually borderless harness racing industry is faced with a closed border during a pandemic? All but one of the U.S.-based drivers will stay home during one of Canada’s biggest race cards of the year due to differing border interpretations about quarantine exemptions.

Canada’s premier harness race has long been dominated by drivers based in the United States. Over the last 20 years, the Pepsi North America Cup has been won by U.S.-based drivers 15 times.

But in 2020, the coronavirus pandemic has given the NA Cup a much different look. Yannick Gingras is the only U.S.-based driver competing Saturday (Aug. 29) in the $1 million event at Woodbine Mohawk Park, the spotlight event of a stakes-rich card featuring $2.4 million in purses.

Due to COVID-19, anyone entering Canada from the States must adhere to a mandatory, 14-day quarantine, unless, like Gingras, they were granted an elusive exemption, which nullifies the quarantine.

The MLB team has been playing its home games in Buffalo this summer because the Canadian government would not authorize the team to come and go across the border.

Tetrick, Mark MacDonald, Peter Wrenn and Scott Zeron, not wanting to quarantine, all attempted to get exemptions. Andy McCarthy, however, chose a different path.

“At this time of year, I’ve got so much going on it wasn’t worth it for me to do a two-week quarantine,” said McCarthy. “Yannick got lucky [getting an exemption] but I couldn’t imagine me being an Australian living in American getting so lucky.”

While McCarthy was focused on winning the Zweig with Hambletonian champion Ramona Hill and the Empire Breeders Classic Final with Hen Party, Tetrick was emailing and calling Border Services and Health Canada, while MacDonald, Wrenn and Zeron took a more direct approach for an exemption.

“Yannick got his [exemption] in the afternoon and I went that night,” said Zeron, who like Gingras was born in Canada. “I was driving from Northfield over to Tioga and I was going close to the Buffalo border, so I just tried.

“I knew everybody got theirs from the Queenston Lewiston Bridge (QLB) and I went to the Peace Bridge because it was closer. And the girl said, ‘It sounds like you qualify for it. You should be able to get it but we don’t give them here.’”

There’s no way to know if Zeron had driven the extra 30 minutes to the QLB instead of the Peace Bridge, if he’d have gotten an exemption. But one thing is certain: the two bridge crossings should behave in a similar manner.

MacDonald, of The Stable.ca, has horses in seven states as well as Canada, so he travels across the border often.

“Horse trainers racing in Ohio are considered essential workers in Ohio, but they are not in Canada so I knew when I went across the border I was fine but when I came back to Canada I would [need to quarantine].”

In July, MacDonald looked at the rules and regulations to see if there was such a thing as an exemption and how to get one. He found that people that work frequently on both sides of the border should be eligible for an exemption, just like essential workers.

He was told he could email the government to plead his case, which he did, but he never heard anything back. He also made it plain that when he contacted Health Canada they made it sound like there was no such thing as an exemption.

At the beginning of August, MacDonald was contacted by driver Billy Davis, Jr., who like MacDonald, crosses the border on a regular basis.

Davis told MacDonald that he went through the QLB and was told that as a cross-border worker he was eligible for the exemption.

So on Aug. 7, MacDonald went to the QLB and told the border agent: “‘One of my colleagues came through here the other night and said that he was considered a cross-border worker. That’s the same thing that I do.’”

The agent asked MacDonald if he had come into contact with anybody with COVID or had any symptoms. And when MacDonald said he hadn’t, the agent said he’d take the mandatory quarantine off his file.

“So I got an email from the Canadian government saying ‘you are exempt from quarantining,’” he said. “The exemptions are actually given out by Border Services and the emails are sent by Health Canada.

“When Scott Zeron and [my brother] Mark [MacDonald] and Peter Wrenn went to the border themselves, [Border Services] said we don’t give out those exemptions here, you have to call Health Canada. I know for a fact they do because they gave me one. Mark and Scott have dual citizenship and are in the identical exact boat as Yannick Gingras and were turned away. Unfortunately, what we’re dealing with is a set of protocols that, although they worked, were put together in a fairly haphazard way.”

At the time of this writing, only five horsemen have reportedly been given exemptions with Gingras being the only one based in the U.S.

“I didn’t come here thinking I was going to get the exemption,” said Gingras. “I came here to do the quarantine. I wouldn’t have been disappointed if I didn’t get it, because I didn’t expect anything.”

Much like Anthony MacDonald, Gingras did a lot of research and made phone calls weeks before his planned Canadian arrival on Saturday, Aug. 15.

And even though his exemption meant he didn’t need to quarantine for 14 days, he still needed to obey the WEG rules.

“I got tested Thursday [Aug. 13] in Jersey before I left because I got wind that WEG was going to be asking for a COVID negative before you could race,” said Gingras. “Then their protocol was they wanted a Canadian one.”

Gingras, who traveled to Canada with his family, rented a place on a lake away from everybody else.

The day he arrived he went to the hospital for a COVID test, which came back negative on Monday. But there were still more WEG rules to be followed.

“At the racetrack they want me isolated from everybody else for the 14 days,” said Gingras. “After the 14 days – which is Saturday – then I’m good to go. Right now I have to wait for my horses outside the paddock.”

And even though Gingras has the exemption from the border, his family does not, so they must quarantine.

Gingras can’t say why other drivers weren’t given the exemption, but he does believe that his preparedness helped him.

“The first thing he asked me was where I was going to quarantine and I had all the information for him to see that I rented a house,” said Gingras. “I was told right away that they wouldn’t be the one giving the exemption, that they didn’t do that. That I had to call Health Ontario and they’d be the ones giving the exemption. I knew that was not accurate and I called the guy out on it right away.”

There are so many grey areas that you’ve got to get the right person that’s talkable and you’ve got to be able to talk your way into it. It’s not right but it’s how every government does it. Everything is grey areas because they can do anything they want.”

With several more big-race weekends scheduled for Woodbine Mohawk Park, it’s unknown at this time whether any drivers will continue to attempt to get an exemption. But as far as the 2020 North America Cup card is concerned, one former WEG regular is happy for the locals.

“I’ve been on that other side watching all the Americans come to race the NA Cup while we all sat in the drivers’ room, so good for them,” said Zeron. “They can make a bunch of money and try to win that race.”