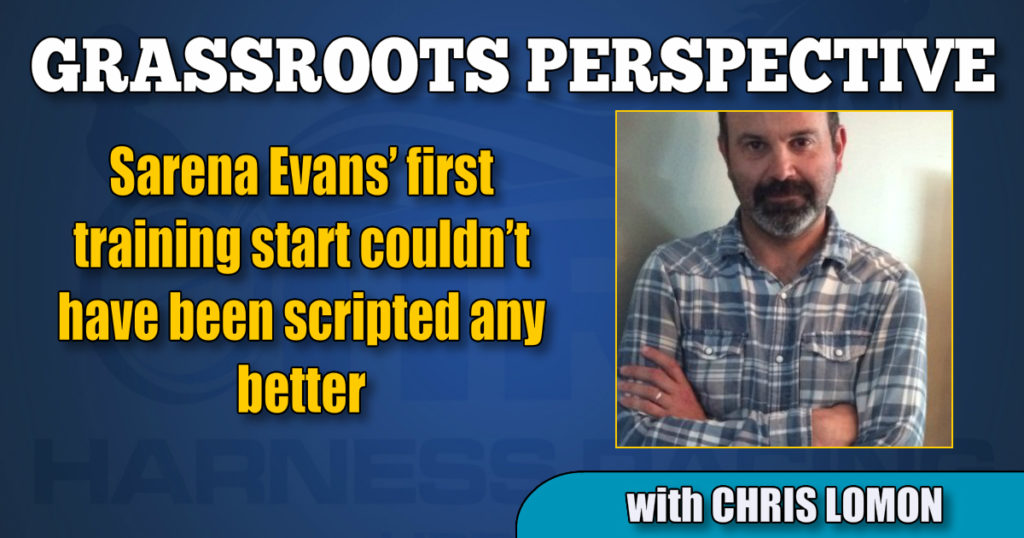 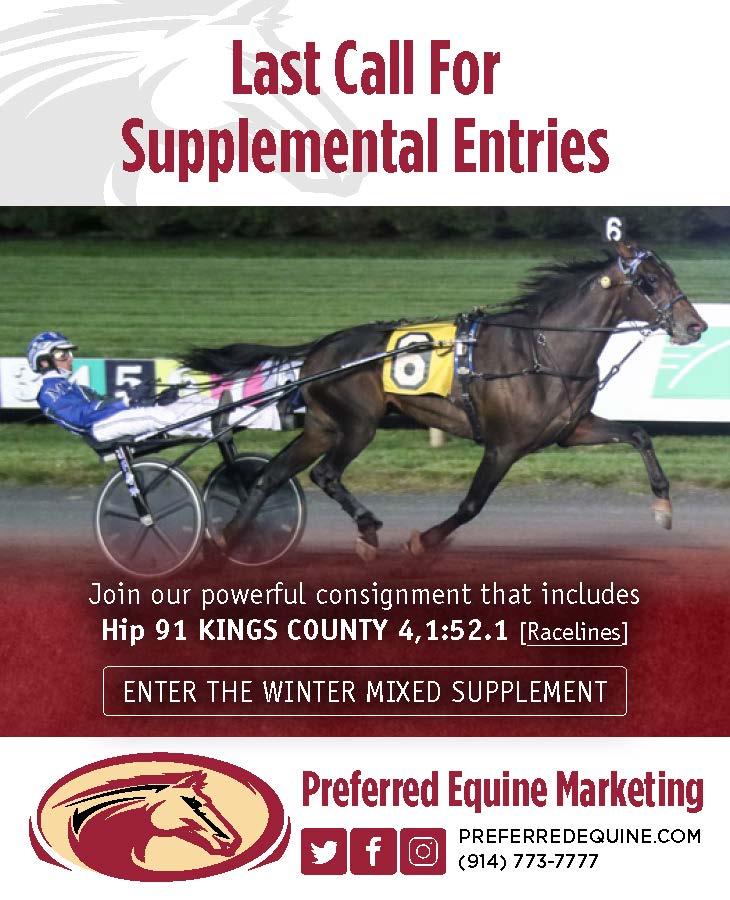 As she watched the battle-tested bay mare heading full-steam into the final turn, Sarena Evans put her hands to her face and began to cry.

Whether Virtual Princess won or not the night of March 3, 2017, the fourth race at Northville Downs (MI) represented a milestone for the pacer’s trainer.

As she helped ready the Michigan-bred miss for the race, Evans, sending out her first starter, was a mixture of nerves and excitement.

Admittedly, her emotions leaned more towards the former.

Courtesy Sarena Evans | A treasured memory from when Evans was a little girl trying to hold the horse with her sister. Her dad is driving and her mom is next to him.

Courtesy Sarena Evans | Minutes before sending Santas Special out for his final race, trainer Sarena Evans said she was “bawling and telling him how much I loved him and thanking him for being such an amazing horse for me.”

“I was really nervous,” recalled Evans. “How can you not be? But you also have to focus on making sure everything is right before you send them on their way.”

Saddled with post eight in the nine-horse field, the odds on the tote board, 3-1, suggested Virtual Princess had a good shot at taking all the spoils.

Evans’ expectations, as the field lined up behind the gate, were modest, to say the least. She would have been satisfied with a fifth-place finish.

After getting away ninth, 10-plus lengths off the lead, Virtual Princess improved to fifth at the half-mile call, now less than three lengths behind the pacesetter.

By the time field reached the three-quarter mile mark, the mare was fourth and rolling.

It was around that moment when Evans began sobbing.

“I was just hoping for a check. I really just wanted her to do well, to have a nice race. I also just wanted to have the first training race under my belt. When she came around that turn and had enough go in her to win… I was in tears before they even hit the stretch. I knew when she came off the last turn that she was the winner.”

The win was even more special considering Virtual Princess is the favorite of Evans’ daughter, Taylor Novak (also the horse’s groom), and the driver that night was Kody Massey, Evans’ cousin.

Evans couldn’t have scripted it any better.

“I couldn’t believe that in my first training start we ended up with the eight-hole. But it all worked out. She raced huge that night. It was so exciting for all of us. We were all crying, but it was definitely tears of joy. I have a big picture of that win in my office.”

Evans, who launched her training career three years ago, comes by her love of standardbreds naturally.

Growing up in Michigan, her father, Gary Massey, had a huge breeding farm with standardbred horses. As a harness trainer, he won 208 races, including a career-best 89 wins in 2007, adding 507 more victories in the race bike.

Injuries on the racetrack and a battle with lung cancer resulted in retirement from his racing roles, but Massey remains an ardent follower and fan of the sport.

He also remains an invaluable source of knowledge and advice for Evans.

“My dad has always done everything first class and top notch since I was a little girl. He’s the one who got me into this business. He was racing when I was born, and was a leading driver in Michigan. My parents had a breeding farm when we were growing up, with 80-plus horses, and my mom [Jackie Massey] kept us all going and took great care of us.

“I’ve learned everything I know about this sport from my dad. To this day, I lean on my dad. I’ll call him and say, ‘Dad, what should I do with this horse?’ He’s my lifeline in this business. He lives just five miles away from me, so that’s great having him live so close by. I really think he lives through David [driver, Lake, who is Evans’ boyfriend] and I. To be able to talk about our horses with him – it’s something that puts a smile on all our faces.”

Evans, who points to owner-breeder Greg Gardner as one of her biggest supporters, has her fair share of success stories to speak of.

“Santas Special – who I just retired – is my all-time favorite. He won his last race in 2018, but I raced him up until December 31 last year. He’s in my barn still as my riding horse. He’ll never leave us. When David and I got together, he brought the horse with him. It was David’s horse, and then I took over. He is just an amazing horse. He has one eye, and this wonderful personality.”

Two years ago, in late November, Santas Special lived up to his name and delivered his connections an early Christmas gift at Northfield Park.

“It was totally unexpected,” said Evans. “It was so cold and I almost scratched him. We were thinking, ‘he probably won’t get a check tonight.’ And then he goes out and wins.”

Acting Captain, a bay son of Somebeachsomewhere, is another Evans favorite.

“I gave my other daughter [Carlee Evans] Acting Captain because she loves him so much. He came with David, too. We had sold Acting Captain a couple years ago, and then we found him living with an Amish family. We bought him back off the Amish wagon and he paid for himself after just three starts. We still have him. He’s definitely Carlee’s favorite.”

Evans’ daughters play a major role in her training operation.

“My two girls are a huge help,” said Evans, who currently trains eight horses. “When David and I recently went to Cleveland to race and then stay over to qualify, both of my girls were in the barn taking over for mom. They did all the jogging, and all of the work that needs to be done. I’m very lucky to have them helping me. It’s incredible, really. They’re in the barn seven days a week. They never miss a day. They live and breathe these horses.”

No need to ask where they get from.

“I love these horses,” said Evans, whose sister, Staci Malady,is also involved in harness racing. “I really do. It’s a tough job, and a demanding life, but I truly enjoy it.”

One of the most challenging obstacles she’s faced came in the early stages of her training career.

“The biggest thing that comes to mind was putting two stables [hers and Lake’s] together. David and I have different ways we go about training. It’s him and I in the barn every day together, along with my two girls. To come together, do everything the same way and not butt heads – it’s been five years in the making – I think we’re finally there. I’m not a driver, but I have my expectations when they go on to the track and how the race should go. David has his own thoughts on that, so we sometimes differ in that way. We actually get along great when it comes to the horses, and I couldn’t do it without him.”

She voices the same compliment for Lake, and her daughters.

“Any of what I do, it feels like a genuine team effort. When you a win a race, it’s great to be able to share that feeling.”

Even if on one occasion, a win resulted in a few tears shed.

“I can tell you those were definitely happy ones,” said Evans.