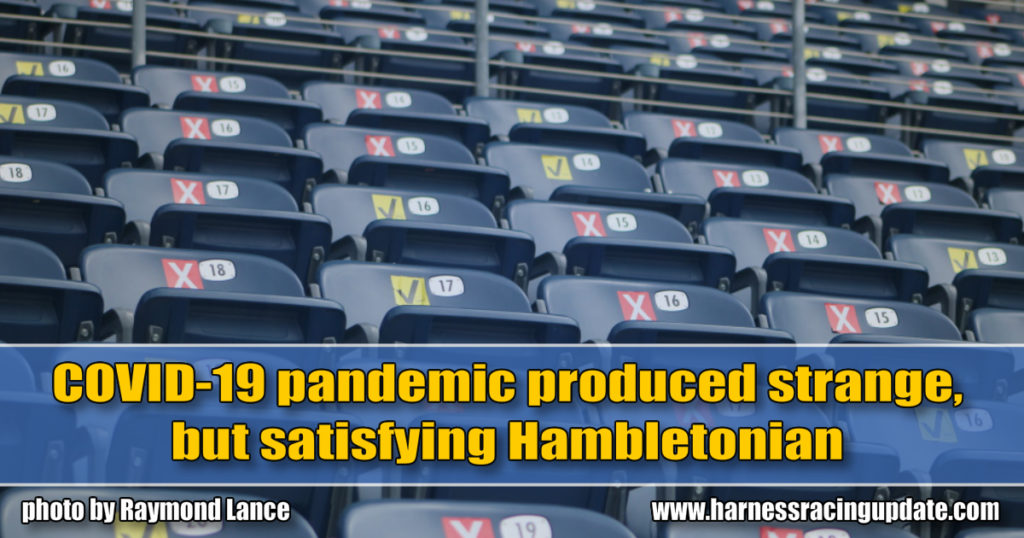 “It’s definitely the strangest Hambletonian I’ve ever been a part of,” said Moira Fanning, chief operating officer of the Hambletonian Society.

Since COVID-19 forced racing to shutdown at the Meadowlands on March 7, both owner Jeff Gural’s staff at the track and the Hambletonian Society have worked on what they would or could do if racing re-opened in time for the 95thedition of the Hambletonian.

“I would sit here and watch the news and listen to [New Jersey Governor Phil Murphy] speak and I would start an operational plan just based off of whatever the news was that day and then kind of tweak it,” said Marianne Rotella, assistant general manager of the Meadowlands.

Raymond Lance | Social distancing extending to the grandstand seating and limiting track capacity to 25 per cent.

Lisa Photo | Meadowlands chief operating officer and general manager Jason Settlemoir (left, honoring Yannick Gingras as the meet’s top driver) led a team that had to figure out how to stage Hambletonian Day safely during a pandemic.

Fanning admits that she honestly thought that by August the virus would no longer be an issue, but when her wishful thinking didn’t come to pass, it was necessary to face the hard facts that the laundry list of things that needed to be done for this Hambletonian would be different.

John Campbell, president and chief executive officer of The Hambletonian Society, like Fanning, had a hopeful view in March but as the months went by he became uneasy with the fast-approaching date of the Hambletonian.

“My main concern was are we going to get open in enough time to get these horses the proper prep for the Hambletonian,” Campbell said.

He spent time speaking with the connections of many of the horses who believed that, if indeed, the track was back racing by the beginning of June, there would be no issue with the preparedness of the competitors.

When racing returned on June 5, there was a plan in place for the paddock, but as with all other professional sports, there were no fans allowed in the stands.

On July 3 that changed and they were allowed 25 per cent capacity indoors in addition to a 500-person social gathering limit on the apron, but no indoor dining.

“It was a matter of getting creative within a couple of days. How do we offer outside dining to maximize our capacity and get people back to racing?” said Rotella.

On Hambletonian Day, food was offered via reservation on the West Deck and Café overseen by Chef Dennis Sammarone, while Jennifer Jordan with ARC Meadowlands was in charge of the Backyard.

Rotella said they couldn’t do what they normally do but that it drove them to make what they could do better.

Many of the events that led up to Hambletonian Day were cancelled, such as the press conference, the charity night, the owners’ party and on the big day there was no autograph session or party of the roof with a DJ. At 25 per cent capacity, the press box was limited to three.

“Through all of this I’ve realized that we’re working just as hard, if not harder, to provide the best service we can provide for much less capacity,” said Rotella.

At the end of the day for the winning connections it was a happy moment that came out of a difficult time.

Michelle Crawford was a Hambletonian winning owner two years ago with Atlanta, and even though she was so happy to win this prestigious race it wasn’t the same.

“It was 1000 per cent different. You’re standing in a line and getting your temperature taken and filling out a form and you’re wearing a mask. I’m claustrophobic so it’s not an easy thing for me. We haven’t traveled anywhere to go to any of these races just because of that. And I’ve had cancer so I’m predisposed and I have older parents and an 11-year-old and if somebody goes to the hospital you can’t go with them. So why would you take your chances and travel outside your bubble?”

But since Crawford bred Ramona Hill she took a chance, as did her partner John Fodera who won his first Hambletonian.

“It was the greatest thrill, a phenomenal feeling and nothing could take away from that [not even COVID-19],” he said.

Fodera has been going to the Meadowlands since opening night in 1976 and has never missed a Hambletonian Day.

But this one was for sure different since his wife of 48, Barbara, was not with him because she did not want to isolate when they travel to see their grandchildren the next day.

“Not to have her there was different, but she was watching at home” said Fodera.