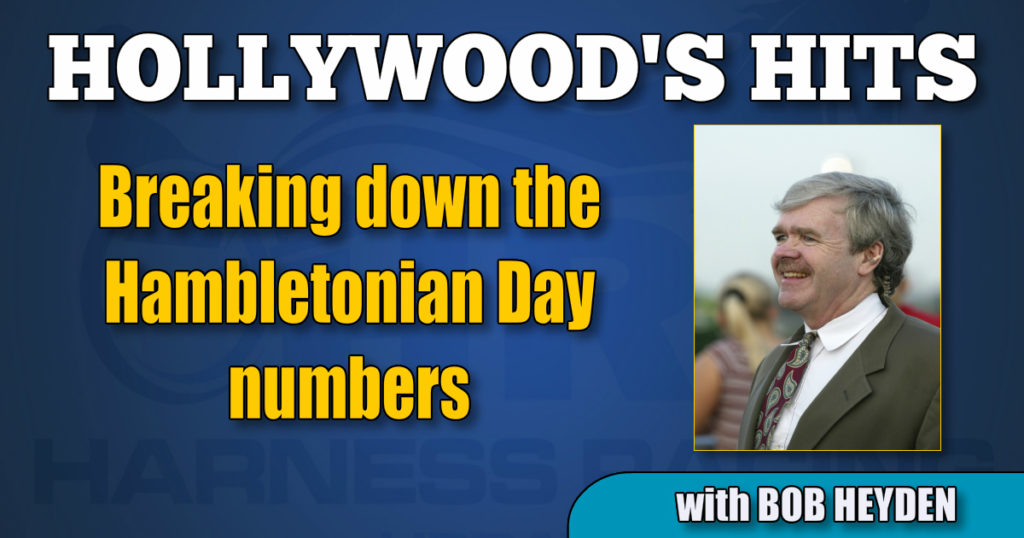 Breaking down the Hambletonian Day numbers

Michelle and Al Crawford had their greatest day ever being part of the winner’s circles for three major stakes — the Hambletonian (Ramona Hill), Hambletonian Oaks (Sorella) and Cane Pace (Tall Dark Stranger).

Caviart Farms was well represented on Hambletonian Day, winning twice on the card highlighted by Tall Dark Stranger in the Cane Pace.

Weaver Bruscemi were rewarded twice on Hambletonian Day, and the Courant Stable has been a major presence as Marcus Melander got money in the Hambletonian final for his fourth straight year.

The seven year itch has been scratched. Tony Alagna became the first American-born trainer to win the Hambletonian since George Ducharme did it in 2013 with Royalty For Life. That was also the last time a favorite won.

Breeders who won on Hambletonian Day

Both ends of the spectrum

Can you ever remember a driver winning at 3-5 and 87-1 on the same Card? Brian Sears just did it with Gimpanzee as the public choice and Zenith Stride for Mark Harder (bombs away) in the Peter Haughton.

Sears also passed $200 million in his career on Hambletonian Day. John Campbell passed the same milestone in 2001 in the Breeders Crown and Tim Tetrick in the 2018 Breeders Crown.

The 2009 HOY and the 2012 HOY — both with 1:50.1 Meadowlands lifetime marks — dominated on the siring front on Saturday at the Big M. Muscle Hill had a record 28 entered, and captured the Hambletonian and the Oaks- — again — with Ramona Hill and Sorella, respectively.

He first did it in 2016 with Marion Marauder and All The Time.

The Oaks win was the fifth in a row — unprecedented in Oaks or Hambletonian history. Muscle Hill also captured the Peter Haughton with longshot Zenith Stride. Don’t forget the fastest trotter on the entire card was by Muscle Hill’s daughter When Dovescry (1:50) taking the Steele Memorial.

Chapter Seven won the Cashman with Gimpanzee with Atlanta, his 2018 Trotter of the Year, going off as the second favorite. Darlene Hanover is a daughter of Chapter Seven, and runner-up Material Girl a Muscle Hill. Reverse that in the Oaks when Muscle Hill won it again, but…yes… Chapter Seven’s Hypnotic AM overcame some terrible 5/8ths cover to get second money.

Ready Cash debuted in style second and third in the Hambletonian with Ready For Moni and Back Of The Neck, respectively.

Not favored… this time

For the first time at age 4 Bettors Wish was not favored. He was let go at 3-1 and he responded with a 1:47.1 victory. This after hitting the half in :52.1 and withstanding serious pressure from Dancin Lou. Remember it was that duo on the wire 1-2 in the 2019 Breeders Crown. Andy McCarthy was a favorite son on this memorable day. He won with three of the four favorites he drove.

The richest 3YO in the Hambletonian field at $690,040 going in, Amigo Volo had bad luck that likely cost him a board spot stuck behind a tiring Threefiftytwo at the 5/8ths.