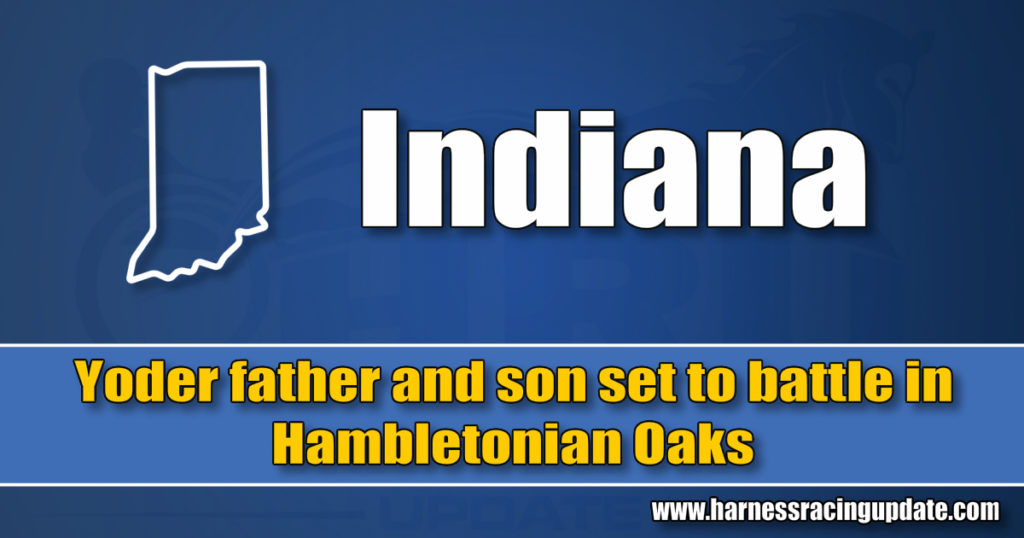 Yoder father and son set to battle in Hambletonian Oaks

A dozen sophomore trotting fillies will go to the post in next Saturday’s $600,000 Hambletonian Oaks at The Meadowlands vying for one of harness racing’s most prestigious titles. It will be a unique and special experience for Verlin and James Yoder. The father and son will each send out their first Oaks starters, one a dominant Indiana-sired 3-year-old, and the other a successful New York-bred trotter. Individually, and as a family, the Yoders will savor the moment, but when the gate folds, they will become the fiercest of rivals.

“It’s a pretty neat situation. You don’t see that a lot,” said Verlin. “To have one filly in is cool. But, to have two is awesome.”

Verlin Yoder has delivered winning moments on the sport’s biggest stages. In 2014, he shipped Natural Herbie to the Meadowlands and steered the gelding to a lifetime best 1:51.4 effort in the $75,000 Vincennes Invitational, part of the Hambletonian Day card. That same season, Natural Herbie also captured the $250,000 International Trot at Yonkers. Two years ago, Verlin triumphed with Woodside Charm in the $600,000 Breeders Crown final for freshman trotting fillies, held at The Downs at Mohegan Sun Pocono. The victory also secured a Dan Patch Award for his charge.

Saturday (Aug. 8), he brings Reba Blue Chip to the dance in his first attempt at the Oaks. Verlin and his wife, Rachel, own the Chapter Seven—Natasha’s Kiss sophomore.

“We own everything ourselves, so we can’t go nominating to everything. So we try to pick our spots,” he explained. “I’ve never had anything good enough to go in the Oaks or the Hambo. We still don’t know if we do, but it will be fun to try.”

Prior to a fourth-place finish at the Meadowlands last night (Aug. 1), Reba Blue Chip finished first or second in nine of 10 career starts while earning more than $75,000 (May Baby was second in that same Oaks prep won by Hypnotic AM). As a freshman, Reba Blue Chip won three times in five attempts, each victory coming at Harrah’s Hoosier Park. This season, Verlin has kept the filly in New York, twice testing her in New York Sires Stakes (NYSS) competition. A filly that has been on the aggressive side, Reba Blue Chip has become more manageable as of late.

“She’s come a long way in the last six weeks. I’ve been able to get the dog chain out of her as far as driving. All spring I had to have a dog chain in her to drive her in a race or a training mile,” the trainer said of his charge, an $80,000 Lexington Selected yearling purchase in 2018. “Now, she’s down to a regular bit, which is a very good thing. She’s starting to grow up a little bit as far as manners. She’s always been fast; it was always her brain that would get in her way.”

The filly dropped in the box after a runner-up showing in NYSS action July 11 at Vernon Downs. There, Reba Blue Chip trotted in 1:52.3. The owner said that while it was good to see a solid effort leading into the Oaks, the decision to enter her did not hinge on that start. Instead, it was a commitment made long ago.

“It’s something you decide in February or March and you have to set up things for that day. You try to be ready for that day,” said Verlin, who turns 47 next month. “The best guy that I’ve seen, and that’s because it’s in my era, is Jimmy Takter. This guy absolutely romps on Hambo Day and romps Breeders Crown night. But he doesn’t make the decision six weeks prior to that; he makes the decision four months prior to that, where he had things timed for that day.”

James Yoder arrives in New Jersey with May Baby, a filly that has been virtually flawless competing in the Hoosier State this season. As a 2-year-old, the Guccio—Free Wheeling lass captured six of 10 starts, finishing half a length behind Rock Swan in the $270,000 Indiana Sires Stakes Super Final as the slight favorite. An $8,500 yearling purchase for Yoder and his wife, Cheyenne, May Baby banked $225,490 in her first season of competition while not always at her best.

“Last year she had a quarter crack and abscess. She had three starts last year where the issues were not bugging her,” James said. “This year, the quarter crack is grown out and her feet are good.”

The younger Yoder gleaned valuable practices when part of his father’s stable and he has applied much of that knowledge as he now manages his own barn. He, too, is selective when picking his spots outside Indiana.

“A lot of my inspiration comes from watching him and knowing how he prepped horses for certain times of the year,” James said of his dad’s strategy. “Just try to make sure the horses were sharp when it was time. Backing off horses at times and picking your spots.”

Last season, he closed out May Baby’s campaign in the Breeders Crown. After trotting fourth in her elimination at Woodbine, the filly and her trainer found themselves first over racing in second at three quarters in the $600,000 final. She faded to eighth that night.

“It was a good experience for me and for her,” James said. “It’s different when you step up to that next level. I’ve learned from it and I just want to try to apply that knowledge.”

After the 2019 campaign, James and Cheyenne Yoder returned to Bell, FL and the Gilcrest Training Center, where his parents also winter each year, and where Reba Blue Chip and May Baby trained down heading into the 2020 season. He made his filly eligible to the Hambletonian Oaks so that the option was on the table should she return in good form. With three starts under her belt, May Baby has recorded three victories. The first of the season was a hard-earned score versus Rock Swan where she kept a nose in front at the wire in 1:52.3. In successive Indiana Sires Stakes starts she won by four lengths and nearly 10 lengths, respectively.

“We’ve kind of been talking about going all year, but she needed to win all her races leading up to it to make us want to go out. She had to show good miles, and she’s been doing that. So we decided to take a shot at it,” James noted. “I wanted to make sure that she rated good and was doing it her way and it wasn’t me urging her to go more. She has been willing to do it, and she’s been coming out of the races good. It’s an honor to be in it.”

Neither father nor son discussed the decision to enter the Hambletonian Oaks ahead of time. Verlin is proud of the work his son has put in managing May Baby to a start in one of the sport’s top races. Previously, James, who celebrates his 26th birthday today, first visited East Rutherford in 2015, sitting in the stands on Hambletonian Day as a spectator. That season, he sent out his first starters as a trainer, and since then has accumulated 61 victories from 290 purse starts.

“James has done a good job with the filly. I think she deserves a chance. She has shown she’s worthy. I think she has. We’ll find out,” the elder Yoder stated. “That’s what a dad dreams of, that means he’s doing his job. As a parent, all you can ask for is that your kids grow up and make a living for themselves.”

These Indiana natives will have the backing of their home state Saturday, but should each trot out of the final turn in contention, family ties will have no influence on the outcome. James offered an anecdote demonstrating the depths of their competitive nature.

“He actually tried to get me to qualify May Baby against Reba Blue Chip earlier this year at Gilcrest. I quickly backed out of it because I knew neither one of us was going to give an inch,” he said. “There will be no favors. However, if both of us turn for home and it looks like we’ll both hit the board, that would be awesome. I’d be ecstatic.”

“We’ve always said we’re probably the only two idiots that would get a whipping fine in a qualifier,” Verlin said, laughing. “Do you think I would wait on him? Oh, I’d try to beat him, but if he beats me, I’m happy for it.”