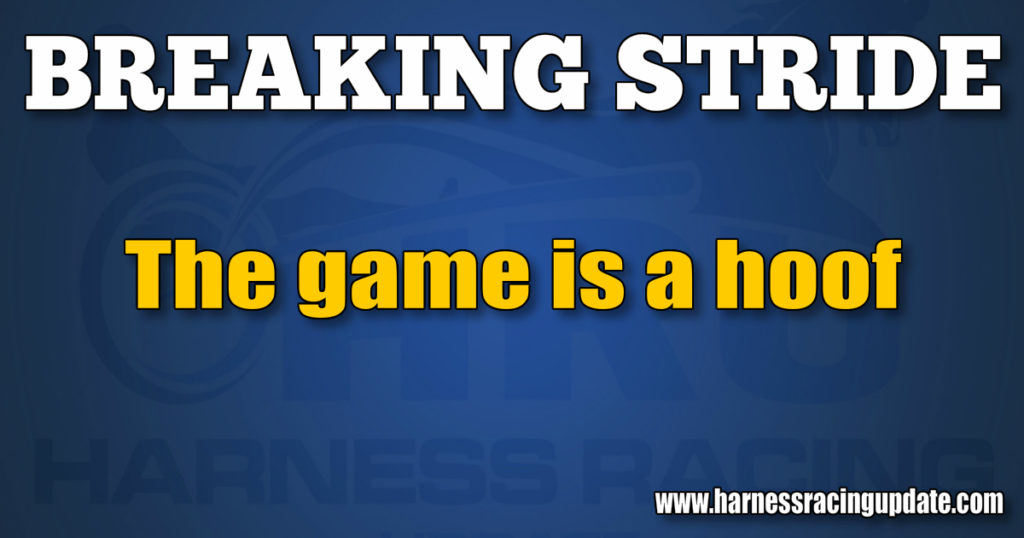 The game is a hoof

“Every time I get bored, I do something stupid.”

From his passenger seat, David replied, “Obviously, you get bored a lot.”

“Very funny. This pandemic is a mess.”

“Imagine if we were working actual jobs,” he said.

“Or if we had wives who got on our nerves.”

He smiled. “Or if we were working from home, had a wife in meltdown mode, kids, and lost Internet service on a rainy Monday.”

I grabbed my chest like a fake heart attack and then said, “I never thought I would go into a 7-Eleven wearing a mask or watch reruns of professional cornhole tournaments.”

He said, “Everything happened so fast. It seems like we woke up in a whole new world.”

I nodded, “Having a toehold in the harness racing game has taken some sting out of lockdown. I can always call a pal and talk about racing.”

“And if I don’t over-wager, it’s cost-effective therapy. I have another sporting idea to fill the pandemic void, an idea that involves you.”

He gave an eye roll and sighed, “Here we go.”

“I propose we have a rumble, a challenge, a dare, a contest, a duel, mano on mano, something to help fill our COVID days.”

“What challenge? Buy another yearling?”

“I don’t know yet. There are thousands headed to the sales block. We can pull a couple out of catalogs.”

“I propose we each chose a yearling at random, a middle tier yearling, comparable ones, from the same state, that will probably sell in the $10,000 to $20,000 range. We can put a few into a hat, and each pick one out. Then, we have until the sales to create a marketing plan for our yearling.”

“A yearling that we do not own, headed for a sale.”

“Just because a horse is in a catalog doesn’t mean they always go through the ring. Who knows what will happen in this unbelievable year? Owners are always free to accept a solid offer at any time. Hell, who knows if all the regular sales will even happen.”

“Why would we try to bump up the value of a random yearling?”

“It’s a contest, dude. We use our brains and see who comes up with the coolest, most effective marketing plan.”

“Do you think owners want their yearling used as a lab rat?”

“Sure. We contact the owner and explain we are trying to get a higher price for the yearling. There are no strings attached. They get a free sales rep working on their yearling. We are experimenting with new methods of moving their product. They have no downside, but if they don’t want to be involved, if they don’t like lunacy, no problem, we pick another random horse.”

“What determines the winner?” he asked.

I smirked, “I suggest the loser sings a complete version of ‘My Heart Will Go On’ at a karaoke club when humans crawl out of social distancing.”

“The Titanic song? Celine Dion? Why that one?”

“Experts rank this as one of the top five songs mortals should never sing in public.”

He smiled and then asked for a ruling, “We can try to sell the yearling privately, or we can try to entice bidders at a live or virtual auction. We can target new customers or traditional customers. The winner of our little wager is the yearling that puts the most money in the real owner’s pocket.”

He stroked his stubble and said, “The idea of slipping into Trey’s world of weirdness is troubling, but this would give me something unusual to do. However, I will crush you with my work experience. Sales and advertising are at the heart of big tech. I have connections, and I know creative marketing.”

I waved him off, “You forget I have experience in harness racing. True, it has been up and down. Okay, mostly down.”

“If we have this contest, the mighty Trey will go down like the Titanic. You will be up on the stage singing.”

“Bring it on. I just thought of another rule we need to write down. No shills. You can’t have one of your wealthy friends overpay for your horse just because you don’t want to sing in public.”

He pointed his finger at me, “And you can’t get the inside scoop on a yearling. You can’t arrange to have a hidden gem.”
“Inside scoop? Hidden Gem? Nobody knows which yearling is a hidden gem. A good yearling is in the eye of the beholder. My last yearling was a sure thing that sure didn’t make it to the races.”

He asked, “Is advertising allowed?”

I thought for a few seconds before answering, “I don’t want you flooding the universe with paid advertising, but we will need to get the word out about our yearling. How about this, we put a $500 cap on our advertising budget?”

“So, we each have a $500 budget and a few months to invent a unique attempt to market a random yearling?”

I nodded, “Yep. I’ve made stranger wagers. Hell, last week, after my nightly COVID cocktail and Coors’s chaser, I wagered seven races at the Meadowlands before I realized I was working off a downloaded Northfield program. It was one of my better handicapping nights.”

“Yeah, one paid ad. You better make it count, Celine.”