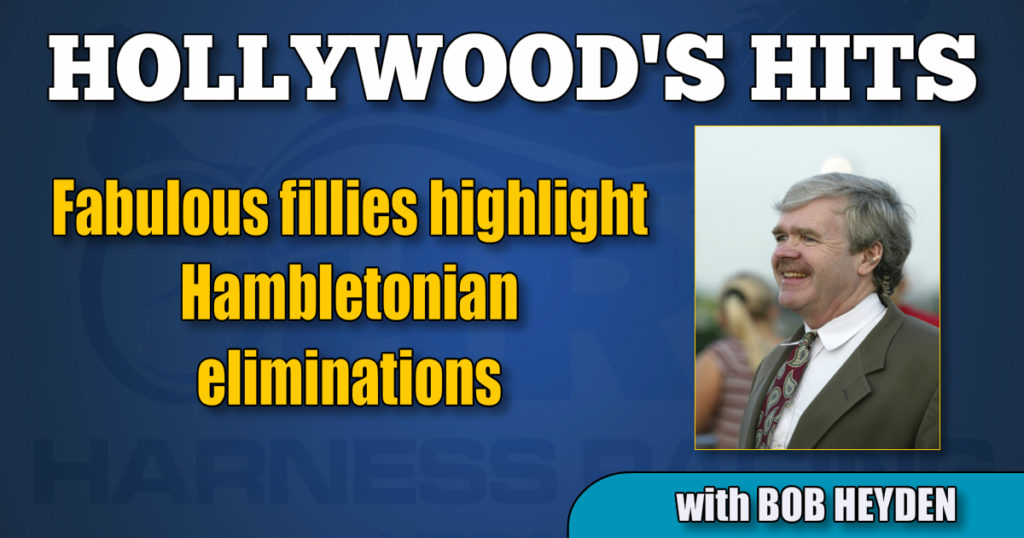 The two fillies entered in Saturday’s (Aug. 1) Hambletonian eliminations may end up favored when the fields go to post.

Sister Sledge and Ramona Hill were 1-2 in the 2YOFT balloting from 2019. This is similar to what happened on 1983 and 1996, the only other times where two fillies dropped in to tackle the boys:

In 1983, Duenna was second choice and Winkys Gill third choice in their elims. Winkys Gill was third and Duenna won. In the final they finished 1-2 at odds of 9-5 and 18-1, respectively.

In 1996, Continentalvictory won at 3-5 and 6-5 second choice Act Of Grace was second in their elim. Both fillies were daughters of Valley Victory.

Both of their sires were odds-on favorites to win the Hambletonian-40 cents to the dollar for Father Patrick (Sister Sledge) and 30 cents on the dollar for Muscle Hill (Ramona Hill).

Only Sister Sledge, of the 17 entered in the elims, has double digit wins lifetime. She is 11-for-16. Ron Burke is one of only two trainers in Meadowlands Hambletonian history to have a favored filly in the Hambletonian final. Mission Brief finished second in 2015 at 4-5 to Pinkman.

Chuck Sylvester is the other trainer. In 1992, he sent out 2-1 favorite Armbro Keepsake who wound up fourth. Sylvester is also the only trainer to race a filly two times in a Hambletonian final. In 1985, he was third with Britelite Lobell at 5-1.

Brad Grant is one of the owners of Ramona Hill. His father, John Grant, gone 11 years, was the owner of the sports #1 stallion ever — Bettors Delight — and he also competed on the very first Hambletonian Day in New Jersey, finishing seventh with Composite for trainer Don Sider.

Father Patrick has three offspring in this year’s elims: Big Oil, Amigo Volo and Sister Sledge. If any advance and one of those three is favored in the Hambletonian final, it would be the first time a stallion has been favored in the Hambletonian in each of his first two crops in 20 years (Greenshoe last year). Back in 1999-2000, the first two crops of Victory Dream were favored — Self Possessed, the winner in 1999 at odds on and then again in 2000 with 9-5 choice Dreamaster, who wound up fifth.

This year, driver Tim Tetrick has Hollywood Story in the 6th race Saturday (Aug. 1) and Capricornus in the 8th— both for trainer Marcus Melander.

Capricornus was bred by the Pete Spears’ Windsong Stable, who bred the 2004 Hambletonian/Triple Crown winner Windsongs Legacy. Though he passed away March 1, 2008 at age 7, he sired the 2010 Trotter of the Year Lucky Chucky and the 2012 Horse of the Year Chapter Seven.

Tetrick has won a Hambletonian elim in eight of the 13 years he has competed, not missing a year since he debuted in 2007. He has won a heat/elim in each of the last four years — a streak unmatched in Meadowlands Hambletonian history. No other driver has done it more than twice consecutively. He also won with Bar Hopping in 2016 and Crystal Fashion in 2018, both favored in the final.

He won elims with Green Manalishi last year and Enterprise in 2017 — both for Melander.

Back Of The Neck races for Howard Taylor and his mother Judith. Back in 1977, completing the first full year of the Meadowlands, Judith was the owner of a 5-year-old named H A Taylor, named for her son, which she owned with her late husband Jerome.

Blais-ing into the winner’s circle again?

Can Luc Blais do it again? The Determination Stable?
A year after winning the Hambletonian with Forbidden Trade, they are back with Threefifytwo.
Six times in Hambletonian history have trainers won it back to back:

It only happened one other time, back in 1937-1938 for Hanover Shoe Farms with Shirley Hanover and McLin Hanover.

Julie Miller trains Big Oil. She is the only female trainer to hit the board in three straight Hambletonians:

Harris debuted with Waitlifter K in 2016 getting fourth money at 14-1 with Matt Kakaley.

Ake Svanstedt has a four-pack in the elims. Jimmy Takter was the last trainer to have four in a Hambletonian final (2015):

Chuck Sylvester is the last trainer to go 1-2 in both elims twice in the same year.

Note: they were the four favorites in the final as separate betting interests:

Silver Pine and Armbro Rotary were last and next to last as the 9-2 second choice in the betting.

Marcus Melander sends out four in the elims. At just 28, he has earned a check in the final the last three finals:

He also sent out four in the elims last year — Gerry, along with the aforementioned three. Gerry did not advance.

Muscle Hill is in the midst of a streak where he has had the Hambletonian or the Oaks winner in five of the last six years, which is close to Valley Victory’s streak from 1994-1998. Take a look:

Those are all Valley Victorys.

Note: his grandson Self Possessed won it in 1999.

Nifty Norman has never won a Hambletonian final, yet he won the Oaks in back-to-back years:

2013 — Bee A Magician $2.40
He also had the beaten favorite in the 2010 Oaks — even money shot Poof She’s Gone, the dam of Chestnut Hill.
He has a pair in the Hambletonian elims: Breeders Crown winning Amigo Volo and Chestnut Hill.
He had longshot Reign Of Honor in a year ago)

• There have been 89 Hambletonian eliminations held at The Meadowlands and favorites have won 47 times (54 per cent).
• From Abundance upsetting in 1995 ($104.20) in his elim to Victory Same at $29.40 in 2001 in his elim, 12 straight favorites won their Hambletonian elim.
• Hollywood Story has the fewest starts of any in this year’s elims. His record is: 6 4-1-0.
• Seven of the 17 entered in the elims are coming in off a victory
• Three of the 17 trainers in the elims were born in the USA. No USA-born trainer has won a Hambletonian in seven years: 2013 —

Royalty For Life for George Ducharme. Since then it has been Takter twice (Sweden), Svanstedt once (Sweden) Blais once (Canada) Rick Zeron once (Canada) and Wellwood once (Canada) The three this year born in the USA are Ron Burke, Tony Alagna and Julie Miller.