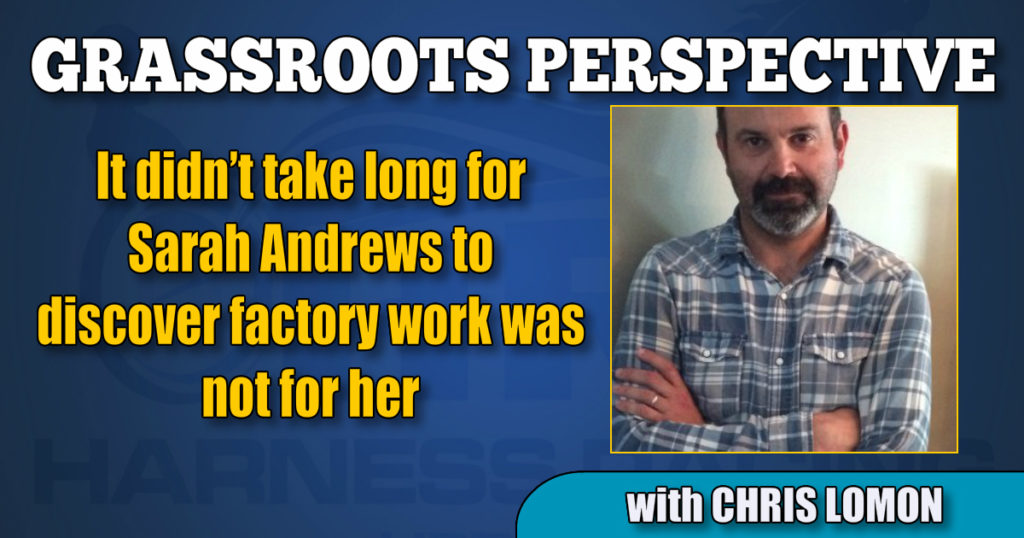 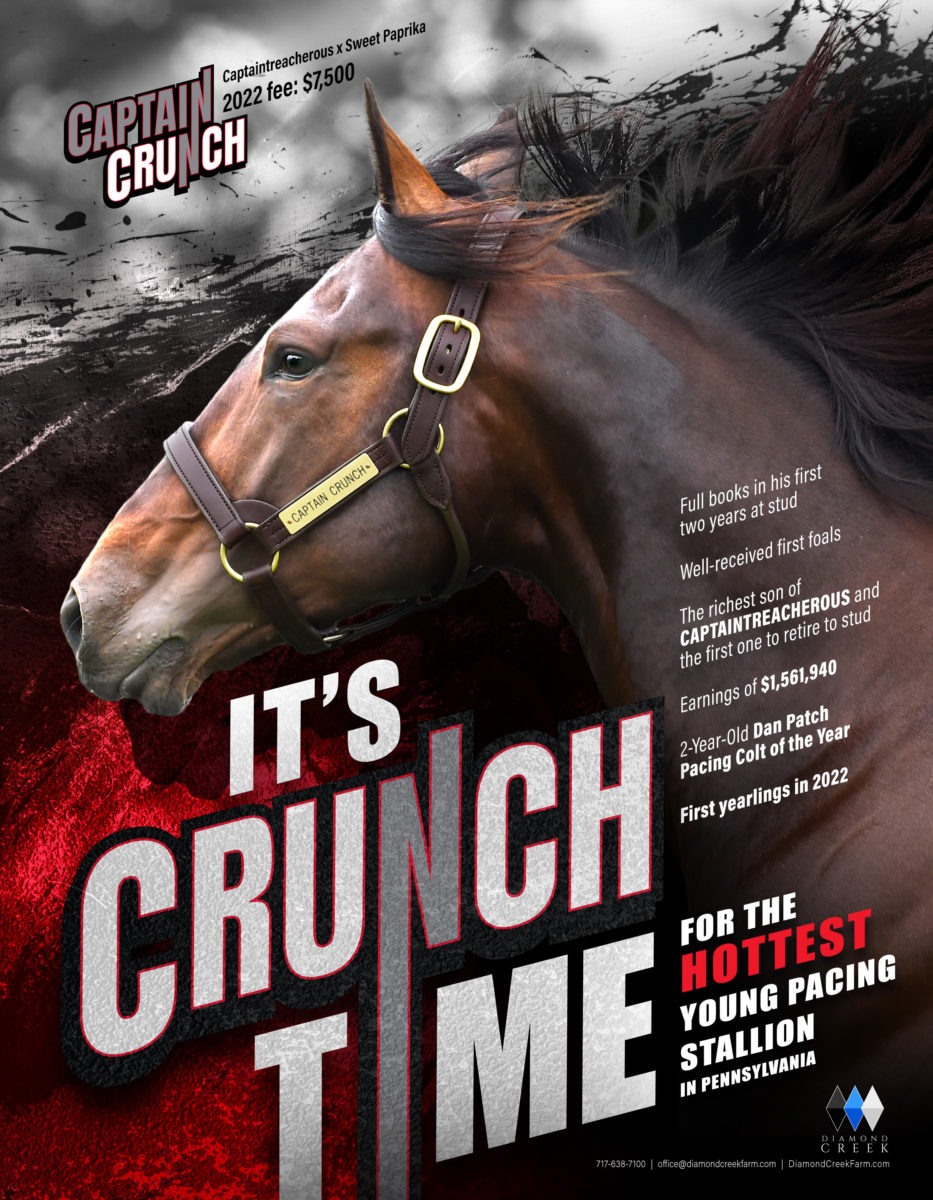 Four days of work, three days off. The job seemed full of promise, but for Sarah Andrews, it was missing one key element.

In many ways, the decision to leave the harness racing world to work in a completely different industry was an expedition of sorts.

If working in the manufacturing plant turned out to be rewarding – not just in the monetary sense – Andrews would consider making a career of it.

And if it didn’t pan out, she could always go back to standardbred racing.

Andrews figured out the answer in a relatively short period of time.

“I worked for [trainer] John Butenschoen for a while, and a big company moved into the area,” said Andrews. “I thought it would be a good idea to get a traditional-type job. I worked four 12-hour shifts and then I would have three days off. Then, you worked three 12-hour shifts and had four days off. It sounded good at the time. But I didn’t like the 3 a.m. to 3 p.m. shifts. It just didn’t work out. Punching the clock and having to be there in that environment… it wasn’t the same as being around the horses. I missed them.”

Horses were on her mind the moment she accepted the job.

So much so, in fact, that on her days off, Andrews didn’t turn her alarm clock off to get some much-needed rest.
She had somewhere to be.

“I still went and helped John on some of my days off because I missed it. It didn’t take me long to realize where I wanted to be, so I quit the job in the plant and came back to the horses. I actually came back to work for John.”

Andrews had first met Butenschoen when she was 16. A family friend took her to his farm in Marengo, IL, not far from where Andrews lived.

The visit proved to be the launching pad for a life in horse racing.

For over 20 years, Andrews worked as an assistant trainer for a number of standardbred stables, including some of the most successful ones in the sport.

After working for Butenschoen, she moved to the New Jersey operation of Carl Porcelli, Jr. before beginning her association with trainer Joe Holloway.

With Holloway, she found herself around some of the game’s biggest stars, including Always B Miki and Breeders Crown champion Divine Caroline.

What she learned from all of her experiences was akin to an Ivy League education.

It also helped her graduate to the ranks of full-time trainer.

While she had conditioned horses of her own over the years, it was in 2017 when she truly began to make her mark.

In 2017, in just her second campaign at The Meadows, Andrews recorded 34 wins accompanied by a .253 UTRS.

“A couple of years ago, I had a friend send me some horses for a couple of different owners, just because they couldn’t get them in, and it started snowballing from there. I ended up keeping those owners to this very day. [Trainer] Scott De Domenico, he’s always helped me out, sending horses out here in Pennsylvania that he needed to get raced.”

One of those horses was Normandy Beach, a bay son of the legendary Somebeachsomewhere.

“Just a really nice horse. He’s a Pennsylvania-bred and Scott thought he could do well because he fit some classes out here. It worked out really well. [Owner] Adam Friedland, and [owner, former driver/trainer] Brian Carsey started giving me horses on top of Normandy Beach – it was Scott who sent the horse to me – but it really snowballed from there. Brian, and other owners, they started to send me horses pretty much because of that horse.”

Andrews has certainly capitalized on the opportunities she’s been given.

Good fortune is far from the only reason for Andrews’ success.

Her willingness to listen and learn over the years has helped her shape a training style of her own, a philosophy that contains useful pointers she’s picked up from others along the way.

“I’ve worked for a lot of different trainers and I still use a lot of what they’ve done and incorporate that into my own program. It’s worked out well. For me, the one thing that’s always stayed with me is that you don’t keep a horse in your barn if it’s not doing well at the racetrack you’re at. You need to be honest with the owners. You just tell them, ‘Maybe it’s better if someone else tries with the horse.’ The owners appreciate that.”

It’s obvious they do.

Andrews, who currently has 12 horses in her barn, is grateful for the support.

“At one point, it was a challenge to find owners that would keep horses in your barn – you get a horse and then they move on. It was so up-and-down for a while. It was hard for a long time and at certain points, I’d have to go back and work for other people. Now, it’s really good. I feel very fortunate.”

Which is how she feels about the return of live racing after the COVID-19 pandemic shut down live racing across North America.

“It was tough. When we got the word we could race again, I knew my horses would be thoroughly ready because we made sure they were in great shape. I was just so happy to be back. I was thrilled. When you didn’t have anything to look forward to it was tough. You always look forward to the next day when your horse is in to go.”

Although there’s no need to ask Andrews if she’d ever consider a job outside of harness racing, she’s happy to provide an answer.

“No way. After that job at the manufacturing plant, I knew that this was going to be what I wanted to do. I gave it a try, but it just wasn’t for me. This job… it definitely is.”