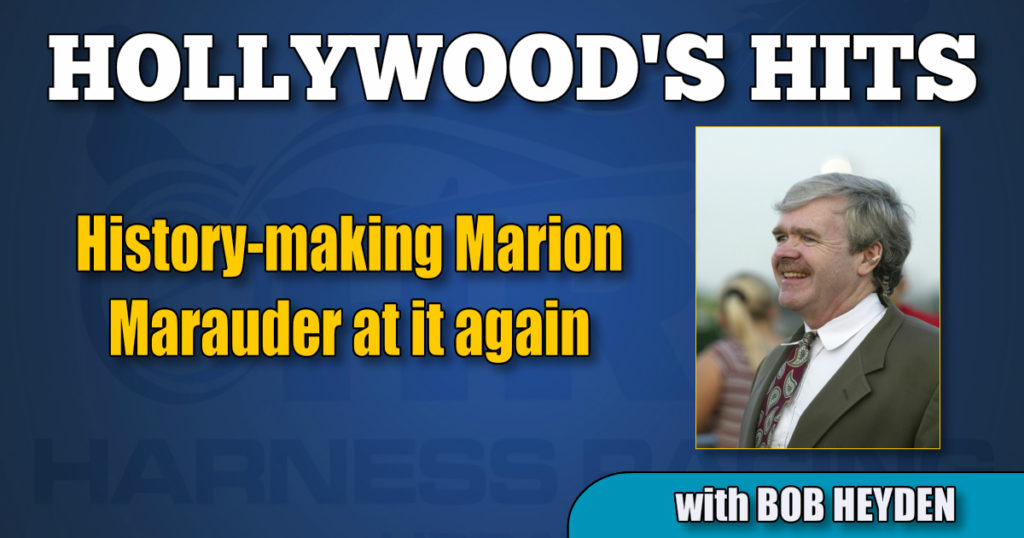 History-making Marion Marauder at it again

The 2016 trotting Triple Crown winner Marion Marauder set yet another record on Friday (July 24) at the Meadowlands. He lowered his lifetime mark a full second to 1:50.2, just 2/5ths off the track standard co-held by Sebastian K and Archangel for trainer Paula Wellwood. Scott Zeron drove for Jean Wellwood and Devin Keeling of Ontario.

FIRSTS are nothing new to this 7-year-old son of Muscle Hill out of Spellbound Hanover. Consider this list:

5. Paula Wellwood is the first and only female trainer to have a Triple Crown winner, thoroughbred included.

8. He took his lifetime mark in his 66th career try.

10. Nobody else won all three Triple Crown races by either a nose or a head.

Trainer Mike Keeling, Paula’s husband, has also been with the triple millionaire every step of the way.

“It’s hard to believe a horse of this caliber hasn’t seen the winner’s circle this long,” Mike said. “He really hasn’t changed much, but the way they race has. It has made it harder for him to get into striking distance.”

How about the NEW JERSEY connection that both father and son have and had?

Muscle Hill, the 2008 freshman Breeders Crown winner at the Meadowlands, made his first five starts as a sophomore and his first four qualifiers at the Meadowlands in 2009. He took his mark of 1:50.1 winning the Hambletonian. He stands at Southwind Farms in New Jersey.

Marion Marauder took his mark 1/5th off of dad’s right in East Rutherford, in addition to winning the Hambletonian there.

His dam is Spellbound Hanover by Donerail. Spellbound Hanover won over $950,000 lifetime and was a New Jersey Sires Stakes star in 2000-2001. She captured the 2000 Merrie Annabelle (Now the Doherty Memorial) for $346,000 for Bill Popfinger. Her sire, Donerail, has the unique distinction of never having left the Garden State at all. The 1994 Peter Haughton winner and 2-year-old trotting colt of the year, he was the final hope for Stanley Dancer for his 6th Hambletonian back in 1995 but retired that summer.

Mike added some more New Jersey flavor to Marion Marauder’s story: “When he races at the Meadowlands, he stays at Magical Acres. Last year he was turned out at Dr. Mazzarisi’s Farm in Jersey, too.”

He’s 7 now, which is old for a trotting stallion with this kind of bio right?

“Racing beyond this year is difficult to forecast,” Mike said. “Europe would have been a logical step but COVID may have a lot to say about that.”

P.S.: If Marion Marauder races into 2021, he’ll tie the five-years-after mark for Hambletonian-winning stallions. Timothy T did it in 1970, going another five seasons and taking two Elitlopps. He finished up after the 1975 season with $894,237 — ranking in the top five all time among trotting males upon retirement. (Shiaway St Pat raced through much of the 1980s after winning the 1981 Hambletonian, but was a gelding competing at the lower levels).