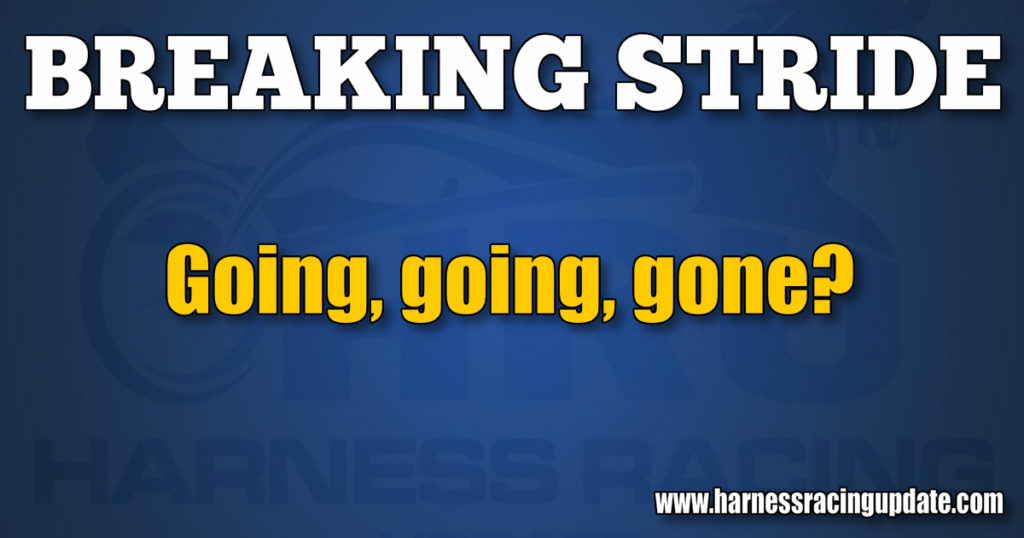 “Online auctions could well be the wave of the future,” said my pal as we drove down a country road on the way to a farm to inspect a yearling that may, or may not, go through a sales ring this fall.

I sighed, “Online won’t be the same.”

“The future never is. Who knows how the virus will play out? Everyone, in every business, is going along trying to do business as usual. It’s not.”

“In the old world, I had tickets for a ballgame tonight. Instead, I have a mask fitting.”

“This is all so surreal. You may never attend another live yearling auction.”

“That would hurt. Auctions are like going to the corner bar, or a ballgame, or a reunion with your friends. A couple of days with nice folks, punching shoulders, throwing barbs, slinging bull, gossip, dreams, horses, and free snacks. Everything that makes life worth living.”

“A good part of Trey’s world?”

“Yeah, I enjoyed sitting in the audience with my catalog, writing down my guess on the final number, and listening to the auctioneers chant. I’d take a break to wander around and look at the horses, and then go outside for a joint, careful not to get too stoned and find myself the highest bidder.”

“You’ve been in the sport for what, 15 years. How many yearlings did you buy at in-person auctions?”

“Me, none. I can’t take the heat. My partner did the physical bidding. When a horse on our ‘possible’ list headed into the ring, I headed for a corner where I could hear the auctioneer. I’ll never forget those days curled up in a fetal ball, listening for the hammer to fall and praying the number is lower than our absolute upper number, which my pal has occasionally found flexible. Then, waiting for him to emerge, my heart fluttering faster than a hummingbird’s, and give me a thumbs up or down. Ahh, that was living, my friend.”

“Trey? Fainthearted? Hiding in a corner?”

“Bidding on a yearling is intense when you’re not sure you can scrape up the turnpike toll fees home. In my opinion, having your kind of money would take all the fun out of the experience.”

David chuckled, ‘You think bidding on a yearling is pressure? In 500 BC,in Babylonia, wives were sold at auctions. The auctions began with the woman the auctioneer considered to be the most beautiful and progressed to the least. It was illegal to allow a daughter sold outside of the auction method.”

I gave a small whistle, “And people bitch about Tinder.”

He said, “The Latin word auction derives from the phrase augeō, which means ‘I increase’ or ‘I augment.’

I blew him a raspberry and said, “The English phrase for a sentence like that is: Who cares?”

“Do you know that there are several types of auctions?”

I nodded, “The Dutch thing is kind of cool. Like Russian roulette, you pull the trigger once and boom.”

He droned on, “Then you have the Japanese auction. An initial price is displayed. It either starts from zero or whatever the sellers’ reserve price is. Buyers are all invited into the bidding area where the displayed price steadily continues to climb. Bidders leave the stage when they feel bids are too high. The auction ends when a single buyer is remaining.”

“That sounds a tad like musical chairs, you know, the last man standing. Is every type of auction named after a country?” I asked.

“Whoa, whoa, that’s enough auction education for one day. Those all sound like more fun than an online auction.”

I sighed, “Yeah, it’s not easy to explain to civilians, but leaving a live auction after signing the ticket for a yearling, to me, that is as close as you can get to buying a dream. The next few days are a buzz. Every single one of us signing a ticket KNOWS, this is the ONE.”

He said, “It could be interesting seeing what new methods breeders design to sell yearlings.”

“It is going to be hard to replace being in the arena. If I could bottle that feeling of walking out of the sale with the yearling you want at a lower price than you thought you would pay, the market share for yearlings could grow. That happy feeling at a live sale makes getting new folks involved a much simpler task. Filling the void with online auctions, virtual inspections, third parties, or other types of sales will change things.”

He said softly, “The world turns,”