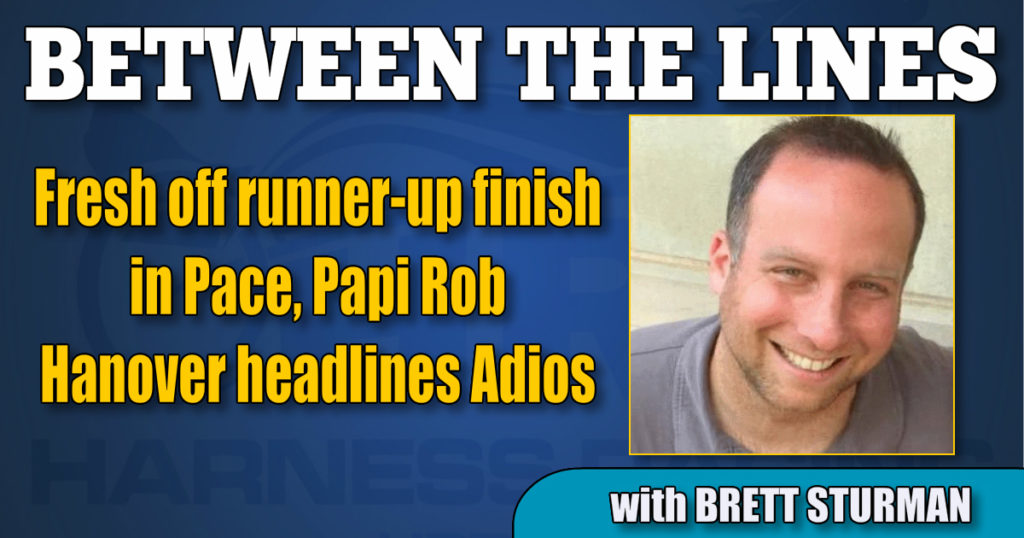 I frequently hear that one of the best ever Meadowlands Pace performances from a horse that didn’t win belongs to Always B Miki from the 2014 edition. For my money, Papi Rob Hanover’s runner-up try from this past Saturday may have been even better.

Take absolutely nothing away from Pace winner Tall Dark Stranger, who was equally game, and his battling back in the stretch after being beaten is something that will be talked about for ages. But Papi Rob Hanover was parked wide from post 9 around the first turn and then was two-wide past the quarter. He was able to tuck ever so briefly in between calls before Miller’s hand was quickly forced and he had to come first over into the fast fractions.

It almost seemed surreal that despite the trip he went by Tall Dark Stranger at the top of the stretch and even looked to have his measure halfway through the lane. I’m not sure if in the end it was Papi Rob Hanover having little left to give or an uncanny ability that Tall Dark Stranger evidently has to fight back – or the fact that I was live to the Pick-4 a few times with both horses and Papi Rob Hanover was paying five times better – but whatever the case that was a race in which performances from both horses won’t soon be forgotten.

For Papi Rob Hanover, there’s no rest as he headlines three Adios eliminations on Saturday at The Meadows. It’s a race that, unlike the Meadowlands Pace which had limited spectators, there will be no spectators allowed due to the ongoing pandemic. For those interested, there will be patrons allowed indoors into the casino on premises, including the sportsbook, but no fans outdoors for racing; this is one smart virus.

In the second of three eliminations, Papi Rob Hanover will loom an overwhelming favorite while seeking his first win of the season. Captain Barbossa is one of five Alagna entrants in the Adios eliminations, and he ended up shuffled along the inside in the Pace final and had some late pace to offer once in the clear; wasn’t bad either in his Pace elimination. No Lou Zing has shot right up the ladder in recent starts, going from the N/W 1 condition to an upset PASS score last out with Josert Fonseca driving for trainer Nancy Takter. The Sweet Lou gelding got the trip in that race but that was a decent foe in Captain Groovy that he beat; making the final from the outside post would be an accomplishment. Sea Of Life is another that scored a PASS upset last out. It seems like he wasn’t as strong as some of Alagna’s others last year, but he’s been strong in his starts as a 3-year-old. Tru Lou and Sweet Truth go for Burke (another trainer with five horses entered), but would need to really step up.

In the first Adios elimination, Captain Groovy may have seen his stock fall a bit since that 1:48 score at the Meadowlands three back. I thought he probably should have won two back over the sloppy track at Philly, but last out he didn’t have it easy when parked to that fast third quarter in 1:21.4. He’s likely the best horse; no excuses accepted in this spot. Another one who has come up short of late is Chief Mate, who lost his last two starts at 40 cents and 70 cents on the dollar, respectively. The outside post against this competitive group isn’t any easier. The Greek Freak proved his PASS upset two back was no fluke when he came right back to win another leg in a lifetime best 1:50.2 for Burke. All three inside horses Later Dudes, Roll With Jr and Sandbetweenmytoes sport similar profiles; they’re a notch below the top one or two on paper but not without a chance of doing some damage.

In the final elimination, Elver Hanover comes out of a race at Scioto that resulted in a track record performance. Left for second place, seven lengths behind race winner Ocean Rock, the 1:48:4 clocking from that race eclipsed Gallo Blue Chip’s 20-year-old Scioto record for 3-year-old pacing geldings. There’s no disgrace in that performance and between that and his 1:48.3 mile from last year’s Bluegrass, he will likely go off as a slight favorite. His main threat looks to be Capt Midnight, who never really fired in either his Pace elimination for final. He should be better than that and will have every chance to prove himself again in this more comfortable spot. Catch The Fire is another that exits a couple no-chance races in the Meadowlands Pace and he took a pretty good run three back in a race that was won by Allywag Hanover; Wilder likely to leave from the outside and work out a trip.

On Sunday, Plainridge Racecourse will have its moment in the sun as they play host to a few of the sport’s very best horses. The rivalry between Atlanta and Manchego heads to Massachusetts as those two super trotting mares have split their first two races against one another this year.

In the $250,000 Spirt of Massachusetts, Atlanta will deserve the slightest of edges. She trotted in a 1:50 mile three back to just miss against Manchego in her first start of the year but avenged that defeat to that same rival next out in the Cutler. Both mares cruised at short odds since that time, setting up Sunday’s rubber match. As for their male counterparts in the race, Lindy The Great was closing at the longest of odds two back in the Cutler and is no stranger to the FFA ranks. Eurobond finally put it all together last out at Philly for a solid win but this is a giant step up.

On that same card is the $100,000 Clara Barton, showcasing last year’s Horse of the Year, Shartin N. Like a few in here, Shartin N was upset last week in the Dorothy Haughton by a 50-1 import in a thrilling edition of the newly-named race. She now makes her second start following the injured scratch due to a minor foot injury. Will warrant favoritism but I think she can be beat. Kissin In The Sand has come out blazing this year. She tired late in her last couple but given the trip she’s more than capable for the Takter barn that can’t miss right now. Soho Burning Love A, who actually beat Kissin In The Sand two back; is another that rates a chance from the same barn as Shartin N.