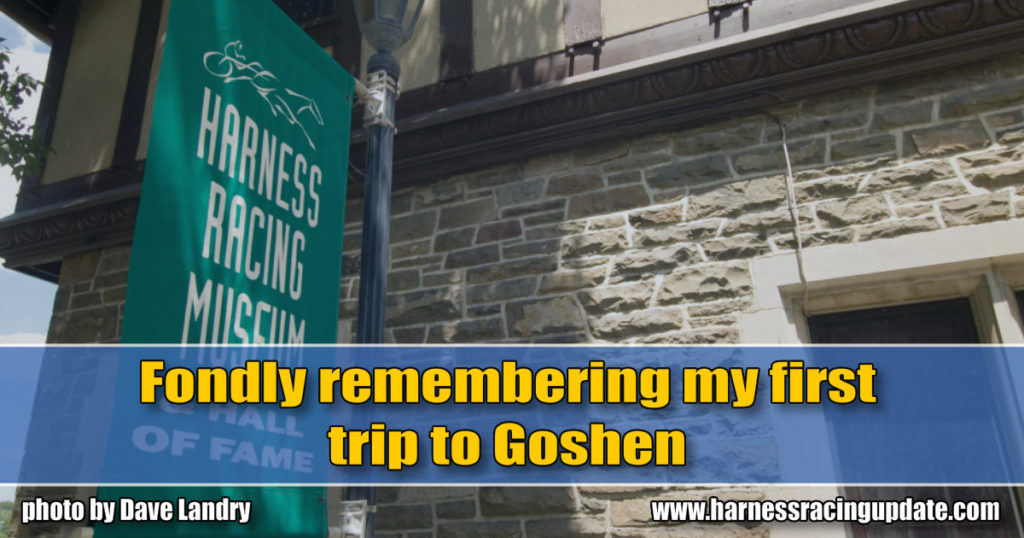 My first trip to Goshen was unforgettable. Driving into the village of Goshen felt like stepping into the past, a setting stolen from a century ago centered by a magnificent 300-year-old church and steeple. I’d left enough time to hit the Hall of Fame and Harness Racing Museum before an afternoon of high-quality Grand Circuit and New York Sire Stakes racing at Historic Track, the “Cradle of the Trotter,” which was once the home of the Hambletonian.

The Hall of Fame was breathtaking. Then 17 years old and quite the harness racing neophyte, having only been to Monticello Raceway near my home in Liberty, I was ready to soak in all the incredible exhibits the museum offered — an actual sulky; an exhibit of a stable; stories and photos of legendary horses and horsemen. There was so much to learn and experience and enjoy. The museum brought the sport’s past to life. I could have spent weeks at the Hall of Fame, but live racing at adjacent Historic Track beckoned.

Walking the short distance to the track, I saw the tree where Messenger, the progenitor of harness racing, once stood. An English thoroughbred born in 1780 and exported to the United States, he was the founding father of standardbreds as well as a great sire of thoroughbreds.

An historic sign revealed that U.S. Grant, the Civil War general before becoming the nation’s President, had taken in the races at Goshen literally a century earlier. How cool was that?

On the way to the grandstand, you could walk right next to a handful of horses stabled close to the track. My mouth was wide open as I saw the colors of several iconic horsemen I’d learned about at the Museum. I was like a kid in a candy store. There were the colors of Billy Haughton, Stanley Dancer, Del Miller and Ralph Baldwin. You could almost reach over and touch the horses trained by many of the greatest horsemen in the sport.

Back then, there was pari-mutuel racing at Goshen, but Historic Track wasn’t about betting and triples and Pick Sixes. An ancient tote board on the infield seemed to struggle to change odds. When the winning horse came back after a race, there was widespread applause from the entire grandstand. Not a boo was heard.

When the track’s owner E. Roland Harriman died in 1978, he stipulated in his will that pari-mutuel racing could not continue. Historic Track seemed likely to die with him, but a cadre of horsemen worked diligently to keep it alive, and they did as a track without wagering. Racing continued in Goshen and horsemen kept sending their top horses to compete in stakes, most of them New York Sire Stakes, which had rich purses. There was racing on a few weekends, but the focal point each summer was the July 4th weekend. Each Sunday night featured the annual Hall of Fame inductions before a gala of harness racing’s most successful drivers, trainers, owners and breeders.

My son Benjamin, who is 31 now, was seven or eight years old when we began a regimen every July 4th weekend. We’d drive an hour and 45 minutes from our home in Albany to Goshen early that Saturday morning. At the track, we’d hook up with our dear friends, Virginia O’Brien and Ann Fobian, who had a box at Historic Track. Virginia, once the den mother of the press box at Saratoga Harness, had come out of retirement in Florida to take over as president of the Saratoga Harness Hall of Fame. Ann was a retired social studies teacher and department head with a love of harness racing.

Benjamin’s love of harness racing was genuine. He volunteered at the United States Harness Writers Association (USHWA) annual awards dinner, and I believe he is the only person in history to have his Bar Mitzvah reception at a harness track (Saratoga Harness), and, thanks to the kindness of announcer Bob “The Bullet” Meyer, call a live race that evening.

At one point, Benjamin was the youngest member of USHWA and Virginia the oldest member. I was smack dab in the middle, 35 years older than Benjamin and 35 years younger than Virginia.

We’d always be joined by our friend Judy Johnson, a speech therapist in northern New Jersey who had attended the Hambletonian every year for decades. She volunteered at the Hall of Fame every summer, and frequently wrote bios in the dinner program on the horses and horsemen being inducted each year.

We’d enjoy the races that Saturday, and on Sunday, after a late morning meeting of the USHWA in the museum, head to the track. Before the races started, Benjamin and I would sit in the empty stands and watch an occasional late morning warm-up of a few horses who were going to race that afternoon. It was serene, simple and refreshing, watching in quiet before the crowd began to shuffle in.

There was no pari-mutuel wagering at Historic Track, but we conducted our own wagering every race: $1 and random selection of numbers. The one constant was the appreciation of each winner the crowd showed. It all just seemed so right at this special place, the way all horse racing should be.

When I became national president of USHWA for two years I had the honor and thrill of addressing the crowd at the Induction Dinner. I kept my message short and spoke from the heart how all the harness writers and broadcasters took the process of voting for the Hall of Fame inductions every year as a privilege, one we all took as a serious responsibility to the sport we all loved.

The most memorable dinner was when Mal Burroughs’ Hambletonian winner Malabar Man was inducted and Mal brought his horse to the ceremony for a brief appearance. Malabar Man looked at us quizzingly and didn’t say a single word.

Then came, for me, my greatest night in harness racing. Not only was I being inducted into the Communicators’ Corner of the Hall of Fame, but so was our dear friend Virginia. Judy Johnson wrote my biography in the program and did a super job. In order that evening, as Virginia had requested, I did her introduction. After she spoke, Benjamin gave his introduction speech for his dad. I’d given him absolutely no input on what he was going to say.

When the time came, I stood next to my son, knowing that whatever he said would be wonderful, and he delivered big time, leaving me in tears, happy tears.

As I made my mercifully-brief speech, I tried to convey my appreciation for the sport and the wonderful people I’d encountered on the way from a star-struck teen-ager to this special moment. At this magical place called Goshen.