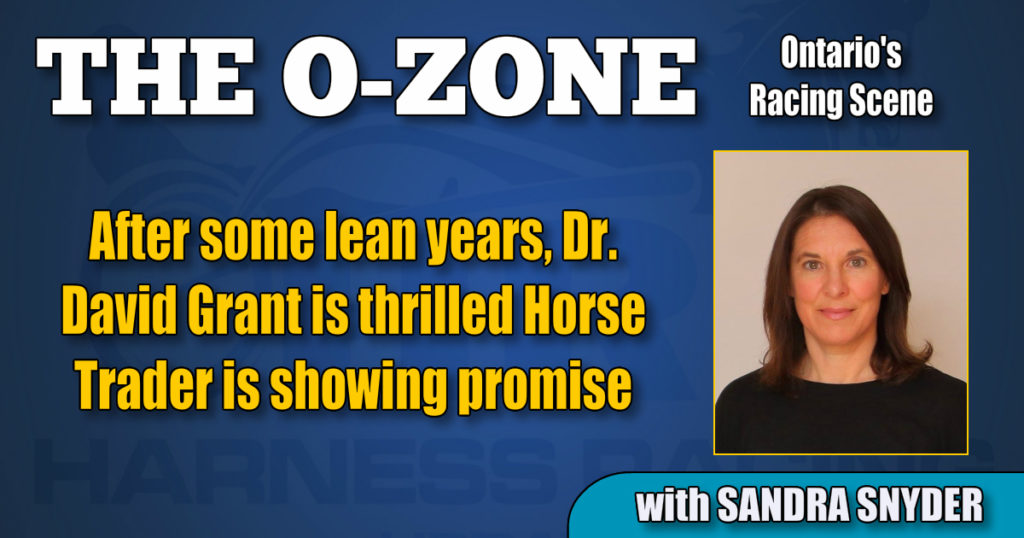 It was a trotter that first drew Dr. David Grant to the standardbred game and it is still trotters that engage his interest 35 years after he watched Jayport Worthy Vic earn almost $100,000 on the Ontario Sires Stakes (OSS) circuit.

“I’ve been a veterinarian since 1979 and in the late 1980s I met a fellow by the name of Maurice Danko, Jr. He trained standardbreds. He was a very smart guy,” recalled Grant. “He ended up with a trotter, a 2-year-old trotter that was extremely talented, and I watched him race a few times and just the way he trotted, and other trotters as well, it was just an aesthetically pleasing gait to my eye. And for that reason I remember thinking that I would like to be involved with the sport, mainly because of that horse.”

Over the next five years the Simcoe, ON resident and his father Ken Grant, a noted breeder and judge of Labrador Retrievers, learned as much as they could about standardbred pedigrees and started to assemble a commercial broodmare band. Between 1990 and 2012 they bred and sold horses with the Oaklea prefix and watched those horses go on to compete on the OSS circuit and join broodmare bands around the world.

Each year, the Grants would retain one or two horses that they would entrust to trainer Paul Walker and among the horses that provided them with the added thrill of success on the racetrack were half-brothers Oaklea Bluejay and Oaklea Julian. Out of the Noble Victory mare Apple Polish, Dream Of Glory son Oaklea Bluejay earned $381,368 and was a Gold Series winner at 2 and 3, while Lindy Lane son Oaklea Julian earned $647,792 and had a brief stallion career after his retirement from racing in 2004.

When his father retired from the business in 2012, Grant decided to downsize. With just a handful of broodmares he no longer sent any yearlings to auction and simply turned them over to Walker for training.

“I’ve had a few yearlings training for the last six or seven years, but we kind of hit a pretty good drought, like nothing really turned out until Horse Trader came along,” said Grant. “Until Trader came along I was beginning to think I wasn’t going to get another good horse, but he popped up there and it was a very nice surprise.”

Horse Trader, a son of Wheeling N Dealin out of Oaklea Wand, made his debut in the Grassroots program last summer, winning at Georgian Downs in 2:00.1. In 11 more starts he would win one leg and the final of the Define The World Series at Woodbine Mohawk Park and finish third in two Gold Series Legs and a division of the Champlain Stakes. He wrapped up his freshman campaign in the Breeders Crown, where he made an early break that knocked him out of contention.

This season, the colt has tallied two seconds and one third in overnight action, and finished sixth and third in the first two Gold Series Legs, for a career total of $134,607.

“His problem is, he’s a little bit too eager, so he uses a lot of his energy before the wings fold on the starting gate. If he could just be a little calmer before the signal is given to go, I think he would be able to trot a little bit further you know, but we’re working on that,” said the owner/breeder. “We’re fortunate to have Trevor (Henry) to drive. He’s a good driver and he’s the perfect driver for our horse, because he’s probably driven every kind of horse there is and he doesn’t seem to get upset with a horse when he misbehaves. And he’s got enough strength to sort of hang on to him as well when he has to, so he’s done very well, we’re very grateful to have him for our driver.”

Since watching Jayport Worthy Vic compete in the 1985 OSS program, Grant has been all-in on trotters. He has never owned or bred anything other than a diagonally-gaited horse.

“Never bred a pacer and never owned a pacer. Some people say that that’s masochistic,” said Grant ruefully. “We just stayed with it. Like I say, the last six years before Trader came along was brutal. I gave one or two to Paul every year and they weren’t the right kind, and he said, ‘Well, one of these days you’ll get another one.’ If you’ve owned horses for any length of time, you’re pretty used to disappointment and it makes the bright spots all that much better, and patience too, it will teach you patience. Owning trotters will make you patient in every part of your life, it seems. It’s a good training technique.”

Grant shares the ability to be patient with Walker, which is one of the reasons their partnership has stood the test of time.

“One of the reasons that I think so highly of Paul is that the horse is first, number one, no matter what. The horse is first 100 per cent, there’s not a moment that goes by where that’s not the case. It wouldn’t matter if it was on the eve of the Breeders Crown, if you have to scratch the horse, you scratch the horse,” he said. “I just find that in the long run it’s obviously better for the horse and actually better for everybody concerned.”

Grant’s veterinary practice is dedicated to horses and he said he serves as Horse Trader’s doctor when needed, which fortunately is not very often given the three and one-half hour commute between Simcoe and Owen Sound.

In 2014, Grant and his wife, Ann, sold their farm and moved down to Lake Erie. The couple rent a property to house the standardbreds, mares Oaklea Wand and her daughter Magically Hip and their offspring, along with Ann’s riding horses. Recently, the couple were delighted to welcome a pair of newcomers to Norfolk County who share their enthusiasm for horses in general and standardbreds in particular.

“We acquired new neighbours this year in the form of Joe and Karen Hudon. They’re fantastic people. They’ve got maybe seven standardbred broodmares that I get to look after and they are more into cutting horses now I think, western horses, so they ride a lot,” said Grant. “They’re very, very knowledgeable about standardbreds. Any time I have a question, the slightest little question about a standardbred — whether something happened in a race, breeding — basically their knowledge is encyclopedic. Karen, especially on the pedigree, is deadly. It’s been a pleasure to have them next door.”

Grant may have downsized, but his enthusiasm for standardbreds has not diminished. Last season he did not miss one of Horse Trader’s races and he is looking forward to the rest of the colt’s sophomore season whether he can be there in person or virtually. In October, he will send this year’s youngster, Royalty For Life–Chippies Victory gelding Oscar Pine, up to Walker with the optimism amassed over three decades of breeding, owning and racing trotters.