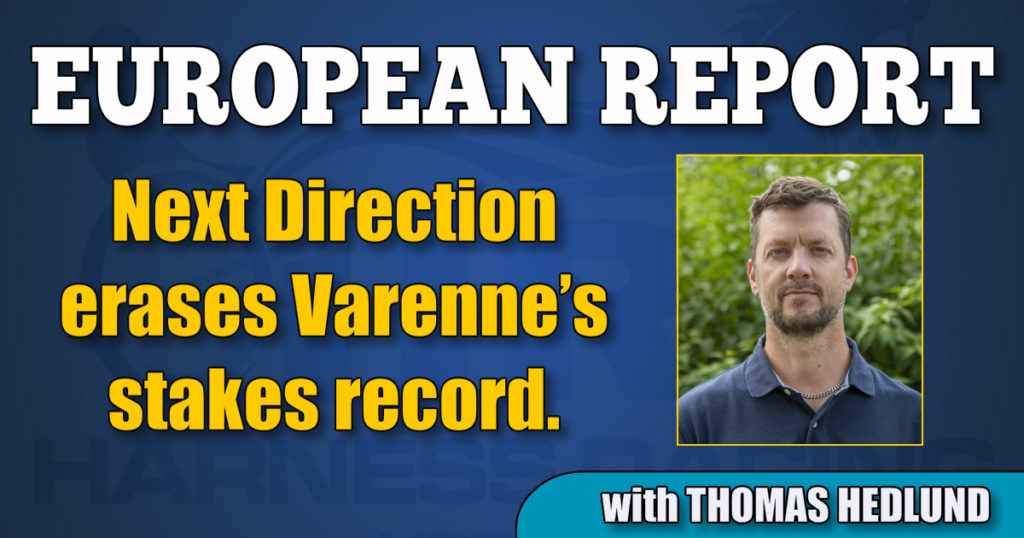 Varenne’s stakes record in the $160,000 St Michel-ajo in Mikkeli, Finland (1:51.2), was erased by a homebred trotter on Sunday afternoon.

The mile race on the acknowledged fast track in Finland became a solo show by Orlando Vici son Next Direction and driver Iikka Nurmonen. The duo left quickly for the lead, held high pace and the opponents were never really invited to the show.

First choice, Italian horse Vernissage Grif, paired with trainer Alessandro Gocciadoro, found a perfect spot in third over, but a strong home stretch wasn’t enough from their part, since Next Direction, already had hit the wire as winner, basically.

Second choice Missle Hill went off stride before the car left the field of 8 trotters and St Michel-ajo became Next Direction’s from the moment the start went off. If it felt like a revenge or not is hard to tell, but the Timo Hulkkonen-trained horse finished second to Makethemark in last year’s edition of the race and Makethemark, who had to do the heavy job first over, held to third place this year for Ulf Ohlsson.

Next Direction won in 1:50.4, the fastest mile ever by a Finnish-bred trotter.

Diana Zet came back on

The $530,000 Stochampionatet for 4-year-old mares bred in Sweden was held at Axevalla racetrack on Sunday afternoon and a heavy cloudburst, just 10 minutes ahead of the card’s most prestigious race, caused some problems for drivers and horses.

Stefan Melander-trained Ganga Bae (Muscle Hill) has belonged in the top of the crop since she won an elimination for Oaks last year and her main antagonist has been Diana Zet, who won Oaks and even Drottningpokalen earlier this season. The two mares came to Stochampionatet’s final after safe victories in their respective eliminations, and after the draw, it was clear that Diana Zet (Hard Livin) once again had better luck since sho got post 3 while Ganga Bae started from post 5.

Örjan Kihlström sent Diana Zet to the front, which left driver Jorma Kontio with no other options than to put Ganga Bae on the leaders outside.

The weather, in addition to the fact that the two favorites were side by side early in the race, made the Stochampionatet an undramatic story where no other horses, or drivers, had intentions of attacking three wide searching for better position. So in the last turn, Ganga Bae got her head ahead of Diana Zet and Kontio seemed to have power left in his horse. But Diana Zet came back on when Kihlström pulled the ear plugs from his trotter and Diana Zet cruised to a safe length win in a mile rate 2:01.1 over 1.6 miles.

Award Kronos (Father Patrick), was served a nice trip in third over by Adrian Kolgjini and the duo claimed the bronze medal.

The victory in Stochampionatet pushed lifetime earnings over $780,000 for Daniel Redén’s homebred horse. Redén and his Stall Zet owns the sire Hard Livin — who also is the father of rookie trotter Don Fanucci Zet in the same barn — and Diana Zet’s mother Marsia L.B. has been successful in breeding before. Her first offspring In Toto Sund (Ken Warkentin), born in 2012, won the Breeders Crown as a 4-year-old and ended her career with earnings of $556,000.

Kihlström claimed his seventh win in the Stochampionatet and thereby equals champion trainer and driver Stig H Johansson’s record in the race.

The $350,000 Hugo Åbergs Memorial is scheduled at Jägersro racetrack on Tuesday (July 28), and the field is set.

The big ”wow” surrounding the race is the fact that 4-year-old super trotter Ecurie D. (Infinitif) will take his chance against tough and merited elite trotters, which makes the race more spectacular, even if the audience still have to watch all races in Sweden on television or other devices.

The field of 10 horses is very strong this year and Hugo Åbergs Memorial has all ingredients of becoming one of the more spectacular races in Europe this summer.

Norwegian champions to be crowned

The $32,400 Championship for Norwegian bred trotters in two divisions is scheduled at Biri racetrack on Saturday (July 25) and the distance is 2,600 meters, approximately 1.6 miles.
Ferrari B.R. (Muscles Yankee) looks to be in fine form and trainer Per Oleg Midtfjeld must have been quite satisfied when his horse drew post 3 behind the gate.
Well-merited Lionel (Look de Star) and Göran Antonsen have been successful in Norwegian Championship before and this time, Antonsen will face some problems from post 8.

Elitloppet contender Vivid Wise As (Yankee Glide) is back in Alessandro Gocciadoro’s barn and will most probably be the heavy favorite in Sunday’s (July 26) $205,000 Gran Premio Freccia d’Europa in Naples, Italy.

1,600 meters is the distance in the race, which has attracted seven trotters behind the gate.