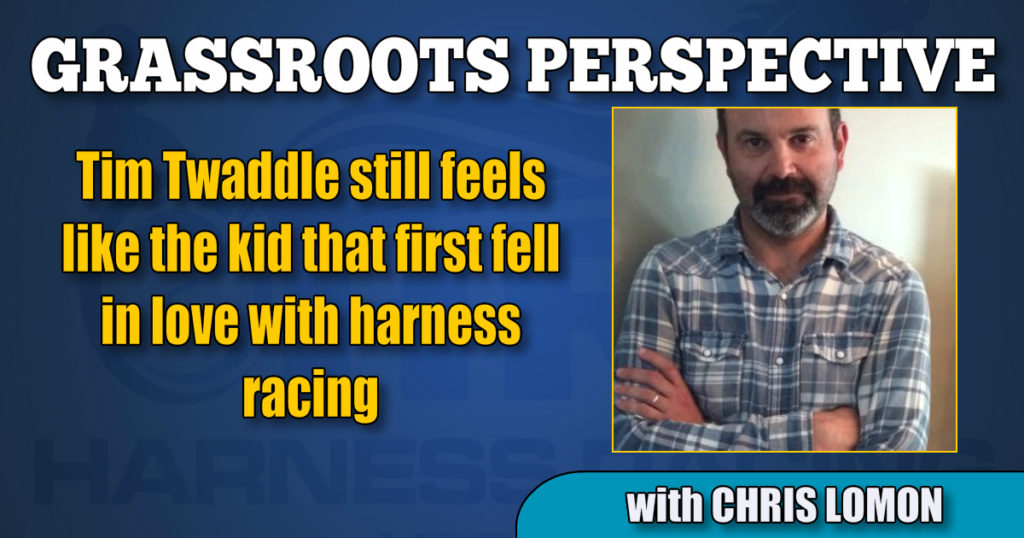 After nearly 40 years in the game, Tim Twaddle still feels like the kid that first fell in love with harness racing

When most kids his age were listen to bedtime stories, a young, pajama-clad Tim Twaddle was sitting in his mother Pat’s car, newspaper clipping in hand, taking in the daily double at Garden City Raceway.

Parked along the backstretch of the racetrack that once stood in St. Catharines, ON, mother and son watched in rapt silence as the pacers or trotters would whiz by, catching a brief glimpse of the pack before they disappeared around the turn.

Twaddle, who would bring along the evening’s race selections, recalls those moments as if they happened the night before.

“I guess most kids my age would be hearing a bedtime story, but I was catching the first two races at the racetrack. I had the entries that I had cut out from theSt. Catharines Standard. On the backside, you couldn’t see that much of the action. But I remember [driver] Ron Feagen – he was a big name back then – and his race bike had red wheels. I’d always watch for that.”

Courtesy Tim Twaddle | Twaddle said his 93-year-old mother, Pat, was responsible for developing his love of harness racing by taking him to watch the races at Garden City Raceway in St. Catharines, ON.

That fascination with horses, drivers and harness racing would eventually lead to a part-time job at Garden City.

Through his oldest sister, Cindy, who worked in the dining room as a messenger bettor at the racetrack, a teenaged Twaddle penned a letter to local horseman Bill Carroll, asking if he was in need of some help with his stable of horses.

The two met and soon after, Twaddle began working for Carroll on the weekends and during breaks from school.

“I knew very early in life that I wanted to be in the horse business and that I wanted to be a driver,” said Twaddle, who earned his driving license in late 1982. “My buddies and I would ride our bikes to the country and we’d find a fence where a horse would come out of its paddock to see us. I love horses and I love racing. Not too many kids can say they got to grow up and live their dream, but I get to say I did.”

Twaddle’s first night in the sulky didn’t start out in memorable fashion.

In fact, after a pair of out-of-the-money finishes, he sat sullenly in the drivers’ room, wondering if he had made the right career choice.

“It was a viciously cold winter night… December 13, 1982. My mom and a lot of family drove up from St. Catharines to come to Greenwood Raceway. The first two races didn’t go well at all. The first horse, he was coming back from a long layoff. I moved him first over and that was a big mistake. It didn’t work out well. The second one, I was part-owner of him, along with [radio personality] Earl Warren. It was a goofy Great Britain horse by the name of Saunders Storm. He was a pulling, runaway-type horse. I remember John Burns put a lip cord on him, so I’d be able to keep a hold him. Of course, the bugger sulked and he wouldn’t go at all.”

The third and final drive of his debut had Twaddle holding his head high at the wire.

It also taught a young upstart an invaluable lesson about the racing game.

“I just wanted to give it up after the first two drives. Luckily, the horse I had for my third drive, I had sat behind him for a couple of qualifying drives. We hit it off good, and he ended up paying $104.10 to win. Everyone who came – my mom and my uncles – bet and made out pretty well. It was a big night. But right then and there, you understood being a driver is all about ups and downs.”

In the late 1990s, he moved to The Meadows – Hall of Fame track announcer Roger Huston convinced him to come – where he became a sought-after catch-driver.

Twaddle also spent time on the California circuit, but returned to The Meadows in the fall of 2006.

“After that, I was approached by some people to drive in California at Los Alamitos. I didn’t think too much about it, but a guy I drove for at The Meadows, Bob Ritchie, he said every winter they bring some horses out there. So, I went, and I got 20 bucks a drive. I had a lot of fun. Through going out there, I ended up meeting the lady who I would end up marrying.”

Twaddle, along with his wife Sophia and their children, daughters Meadow and Lexi, and son Parker, have called Canonsburg, PA, home since the fall of 2006.

Along with training horses for Hold The Line Stable, Twaddle conditions for other owners. Currently there are 25 horses in the Twaddle Racing Stable. Some of those horses, about a dozen of which he co-owns, include Goggles Paisano, Dapper Dude and Donatover.

He also trains for the Thestable.ca, the fractional ownership stable headed by Anthony MacDonald.

But it hasn’t always been a smooth ride for Twaddle, who became a U.S. citizen in 2008.

Injuries, some of them serious enough to send him to the sidelines for an extended period of time, denied him the chance to gain more wins, more notoriety and more opportunities.

One accident, ironically, ended up saving his life.

“I got banged up multiple times in Ontario, and coming back time-after-time, it got tougher and tougher for me. I shattered my hip in an accident at Flamboro in 1985. During the surgery, doctors discovered I had a leaky valve in my heart. They found an aneurism that was the size of a softball. Had that accident not have happened, I might not be around today. I ended up getting a cardiologist, who then put me in touch with a great surgeon in Toronto. It was a great blessing the way it happened.”

Finding work after being out for months proved to be a frustrating challenge.

Despite being cast into the spectator role, Twaddle, whose sister Robin — who ran the Terrace dining room at Greenwood and went on to work at Woodbine during the Ontario Jockey Club era —moved back to the Niagara region from Vancouver to help with his convalescence, didn’t lose his passion for the sport.

He also didn’t lose his sense of humor.

“If you ever want to make God laugh, tell him you have a plan.”

While his original blueprint didn’t pan out, Twaddle’s ability to chart new paths over the course of his career has paid off handsomely.

Not bad for a once wide-eyed kid who watched horses rush by from a backseat car window, rain, snow or shine.

And now, after 40-plus years in the sport, Twaddle, inducted into the St. Catharines Sports Hall of Fame in 2017, still has that very same awe and reverence for horses and horse racing.

“I remember the feeling I’d get when I was in the car with my mom [now 93-years-old], just loving every second of what I saw, even if it was a quick glimpse. After all this time, that feeling hasn’t changed. Every single day, it puts a smile on my face.”