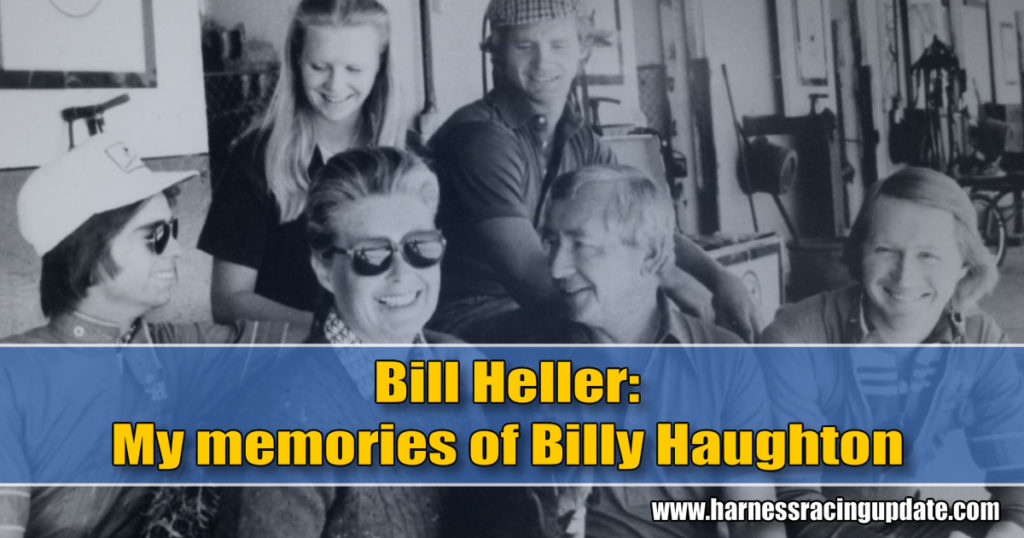 My memories of Billy Haughton

The author of Billy Haughton – The Master remembers the larger-than-life harness racing legend.

In what seems like several lifetimes ago, I was just starting my journalism career when I got the pleasure of covering Grand Circuit Week at Saratoga Harness for the Times-Union newspaper in Albany. I was anxious and, honestly, a bit intimidated with the opportunity to interview many of the greatest drivers and trainers in North America who brought their best 2 -and-3-year-olds to compete in stakes races. We’re talking about Stanley Dancer, Del Miller and, of course, Billy Haughton — legends I first learned about when I walked through the Harness Racing Museum and Hall of Fame in Goshen. They had one thing in common: they could not have been more accessible and cooperative.

When I asked Billy Haughton if I could interview him after a morning’s training session, he said, “Sure,” and escorted me into his trailer, where he promptly offered me a cold drink on a hot July day. Then he gave me enough time to exhaust all my questions. When I walked out his trailer and headed for my car, I thought to myself, “Wow, I just interviewed Billy Haughton!”

Later on, I interviewed his son, Peter, an incredible young talent threatening to become as good as his dad before an automobile accident on a winter’s night near The Meadowlands ended his life on June 24, 1980. He was 25 years old.

A horrible accident at Yonkers Raceway killed Billy 6½ years later and an entire horse community grieved again. He had been the leading driver in victories in six consecutive years and the leader in earnings eight straight and in 12 of 17 years. He was 62. As a driver, Billy won 4,910 races with earnings of more than $40 million.

A few years later, while I was researching Secretariat’s jockey Ron Turcotte’s career for his biography, I learned that the Turcottes and the Haughtons were neighbors in Oyster Bay on Long Island and became friends. Ronnie told me of many conversations between Billy and him, and I smiled at just the thought of how incredible it would have been to listen to those two legends discussing horses. Billy owned several thoroughbreds, and Ronnie admired Billy’s horsemanship, because in harness racing a man could be both driver and trainer, an opportunity jockeys never have during their riding careers. When their riding days are over, just a handful even try to become a trainer.

Seven years after writing Ron’s biography, Billy’s dear wife Dottie, in conjunction with the Hall of Fame, afforded me the privilege of doing Billy’s biography, which Dottie and I titled, “Billy Haughton – The Master.”

I drove from Albany to New Hampshire to begin my work at the Haughton’s Pioneer Farm. It was a long drive on a cold and wet evening, and when I arrived, Dottie had homemade soup and peach cobbler for me. Then she afforded me the inside look at the greatest driver and trainer in harness racing history.

Interviewing her and her children, Cammie, Tommy — an accomplished trainer, especially with trotters — Billy Jr. and Holley, was a wonderful experience as they talked about some of their greatest thrills as well as surviving the double tragedy of Billy’s and Peter’s accidents. They didn’t shirk a single question.

Dottie gave me access to Billy’s incredible horsemanship by sharing with me one of Billy’s marked catalog books. Billy was famous for looking at every single horse he was considering buying in every sale he attended and taking copious notes about each one. The catalog documented that in addition to all his God-given talent, Billy also did all his homework.

That’s what he did when he was growing up in Fultonville, NY, a half-hour west of Saratoga Springs. He would go to the annual Fonda Fair every summer and go to the blacksmith’s shop at 6 a.m. every morning where he learned of the importance of correct shoeing, an asset he used many, many times.

Dottie filled me in on Billy’s ability to take sudden naps, even one time while sharing a small plane ride with Stanley Dancer when a thunderstorm scared Stanley, who woke Billy up. Billy shrugged his shoulders and went right back to sleep.

Dottie said she saw Billy fall asleep for a minute in the post parade in a race at Roosevelt Raceway. “He was so tired that night,” Dottie told me. “He’d driven in another state that afternoon. I saw his head drop down. The horse turned by himself and followed the other horses. And I saw him wake up. He knew it. He shook himself up. And he won the race, too. We laughed.”

There were also plenty of stories of Billy living life to the fullest when he wasn’t at the track.

One of the more amazing things I learned about Billy was that he helped dozens and dozens of fellow drivers and trainers. Jim Harrison, the author of the classic, “The Care and Training of the Pacer and Trotter,” told me the difference between walking out of the backstretch at the end of the card with Stanley and Billy. Stanley would nod to everyone and just leave, but Billy never did as one horseman after another stopped him on his way out, asking him about the problems of one of their horses. Billy would answer every one of them, one of the reasons he was so beloved.

For the foreword of the book, I reached out to Stan Bergstein, the multi-talented executive vice-president of Harness Tracks of America, a man I was honored to call a friend. Stan did his typical brilliant work with the foreword. About Billy he wrote: “It was not statistics or numbers that spelled out Bill Haughton’s greatness. It was the quality of his life and his stature as a man. For harness racing, he was star, spokesman, superb Hall of Fame trainer and driver, inspiring father and family man, symbol of the very best the sport can produce.”

Before the book was published, Dottie asked me if I would like a set of Billy’s colors, the famed green and white silks. I couldn’t adequately describe my gratitude.

Dottie, always remembered as the First Lady of harness racing, passed away at the age of 87 in the spring of 2019, leaving a great void in the sport. Like her husband and children, she did everything she could to help support a sport which needs all the help it can find.

The Haughtons’ collective impact on the sport they loved is impossible to measure. Getting to know and write about them was the thrill of a lifetime.