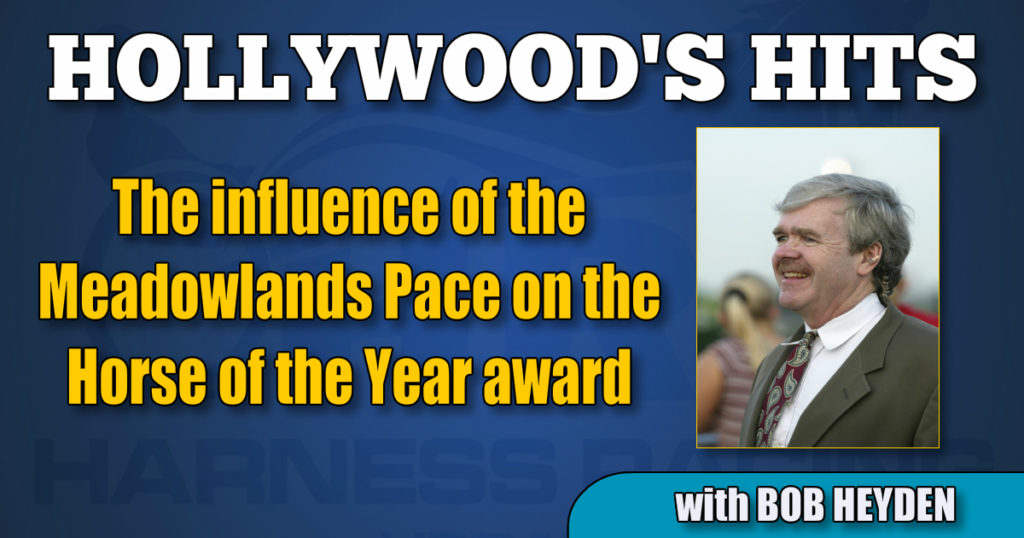 Do you see a pattern here? It seems like every five years or so the Meadowlands Pace winner ends up winning the Horse of the Year award and 2020 appears to be the year this could happen again.

The following Pace winners were the HOY the same year:

Talking about impressive doubles, the following drivers won both the Meadowlands Pace and Hambletonian in the same year:

The last five Triple Crown winners of both gaits were not favored in either the Meadowlands Pace or the Hambletonian:

Jate Lobell, the winner of the first million-dollar race ever held in Canada (the 1987 North America Cup), was the horse to beat in the 1987 Meadowlands Pace.

Even though he was second in his elim, he was odds-on in the final.

He was, after all, the undefeated HOY runner-up the year before to another undefeated horse Forrest Skipper.

Meadowlands management doubled the New Jersey Sires Stakes final to $200,000 to entice him to come east at the end of May.

In short, he was the Great Jate.

But, it turned out he was almost late for the Meadowlands Pace final.

Jate Lobell was stuck in traffic on the New Jersey Turnpike.

Mark O’Mara, now 63, drove and trained the colt for Joe McCluskey of Michigan. Mark recounted the events of that week.

“We had the crew from Sports Illustrated with us all week. In the elimination for the Pace, Jate was lame warming up. I got him around there second and when we pulled the shoe after the race, he had a bad abscess. We cut it out to relieve the pressure. In the final, we drew outside, and I put him in a bad spot early. I was simply out of position. He came home as well as he ever did, but he was just too far back.”

But wait, what about the Turnpike business?

“Because of the abscess, we wanted to give him as much time as possible home and as little as we could at the track. So we left a little late. Then we hit traffic. Big time. I tried rolling up on the shoulder, but a state trooper stopped me. I told him what was going on and, in retrospect, I was lucky to get off with just a warning. What it comes down to is that WE were stressed, not the colt. He shipped well, and like I said he came home as well as ever. I just couldn’t make up that ground.”

Jate Lobell was not a factor in the Pace and finished seventh. Frugal Gourmet and Trevor Ritchie won it for trainer Blair Burgess.

“I try and forget stuff like this,” O’Mara said. “Remember that Sports Illustrated still did the story. Joe McCluskey took it well. He was really good like that. The colt acted good — and for the rest of the year he was 1-2 in all his races until the Breeders Crown when he was third twice, mostly due to me.”