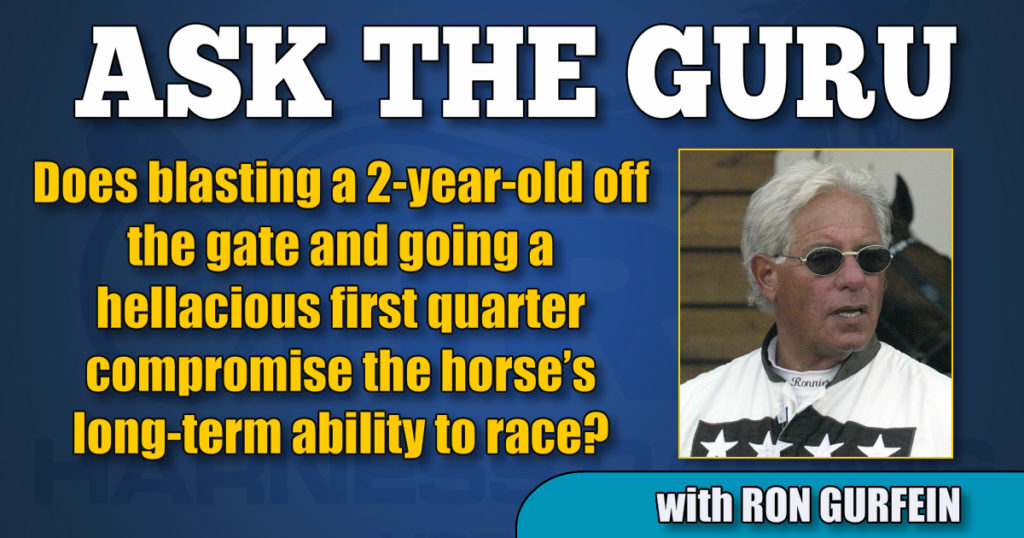 Does blasting a 2-year-old off the gate and going a hellacious first quarter compromise the horse’s long-term ability to race?

That and much, much more in this week’s edition of harness racing’s most popular advice column.

Tidbits: What a fabulous week for racing — both thoroughbred and standardized.

At Keeneland, the well regarded 2-year-old Fauci, owned by Lindy Farm and David Reid and trained by Wesley Ward, romped in a maiden race on the grass. Pressured from the start he handily pulled away mid-stretch for the score.

Sorella, the Nancy Takter trainee I made my choice last week to beat the boys in the Hambletonian was an impressive winner over stablemate Panem in 1:50.2 on a bad track at the Big M. My suggestion to Ms. Takter is to race Sorella against the boys and Panem in the Oaks. What a scenario that would be.

Tall Dark Stranger, also a Takter trainee, was excellent as the prohibitive favorite in the elimination to the Meadowlands Pace. His main rival, Papi Rob Hanover, had to race a mile and a quarter from the 10 hole and was never a serious threat. Unfortunately, he has drawn outside again in the final. This streak of bad posts better end soon.

Bettors Wish, the other victim from a 10-post magical mystery tour, reportedly bled and will miss the Haughton on Saturday. After the horrid journey he suffered, it is not a surprise.

It always helps to give the handicapper all the pertinent information. For example, those with experience saw the trips some of the favorites suffered from outside posts on Saturday night at the Big M. Why not interview the trainers of those horses between races and get the whole story? I know it’s not fun to go on TV after a loss, but it is good for the sport. It’s just another addition to transparency.

The runners always have an interview with the jockey on a 2-5 shot that was off the board and rarely is the conversation completely understandable. Our trainers are usually great on camera. In the case of Bettors Wish, if Chris Ryder saw blood after the race it would have been a big plus to relay the situation to the betting public.

To all of you that condemn the Meadowlands drag time, I have limited Internet in my area so if I don’t want to miss a race I watch on TV and my iPad and noticed that the telecast from the Big M waited for TVG to finish their important $5,000 claiming races so that their coverage will be live to the harness audience instead of five minutes after the race has been completed. That is way more of a reason than just a drag.

I watched a new program on TVG Sunday morning called Across The Tracks. It’s hosted by Todd Schrupp the voice of TVG and to say he does a wonderful job with this new endeavor is an understatement.

The show will cover places of interest that are in the area of many racetracks around the country.

The first show was about Lexington, KY, home of Keeneland Racetrack. He did an interview with Ouita Michael, owner of Holly Hill Inn. It is probably the best restaurant in the Lexington area and is mentioned often in this column by yours truly. He covered subjects from bourbon to the Big Blue Nation. Sadly, no mention of our fabulous Red Mile that gets underway in about two weeks. However, that is consistent with TVG’s attitude toward harness racing.

I want to thank Nikolaus Matzka for his very informative letter explaining the history of trotting in Vienna, a subject I was totally unaware of. It was very long, but I will give you some of the highlights.

There are paintings of trotting races dating back to 1382 in a Vienna Trotting Club.

The Austrian Derby dates back to 1884, a few years after a Trotting Club was born in Baden about 20 miles south of Vienna, a summer hotspot.

Many famous trotters raced in Vienna, including Meadow Road and Florestan (brother to Florican).

Frank Stronach built a beautiful complex of tracks southeast of Vienna—two thoroughbred and one standardbred in 2007 at a cost of 100,000,000 euros. But shortly thereafter, Magna Entertainment walked out leaving him with the problem of funding the races out of his own pocket.

I found the history very interesting and anyone interested email me. I will forward you the various links to the entire story.

To the many Canadian owners that contacted me about the Top 10 money earners eligible to race in a stake, I have simple advice: The earnings list is available to all. Before you put your horse on the truck make sure you will be entered by calling the racing secretary. If you are on the bubble and there is a chance you will not race do not ship till after the draw. At the Meadowlands, Tuesday at 9 am you can get information about in or out. That leaves you plenty of time to get there.

Leslie Robinson asks: Social media has erupted with suggestions for induction to the Harness Racing Hall Of Fame. Two drivers, Tony Morgan and Billy “Zeke” Parker Jr. have been mentioned weekly. What is your take?

I get these questions all the time and to me if everyone that was suggested was in there would be more in than out LOL.

Both of them are very talented, there is no question of that. Zeke is one of the most personable drivers I have ever dealt with on a day-to-day basis. He could make horses go that many others could not, and probably could get more out of a bad horse than anyone I have seen.

Tony is very much the same kind of driver. Not as aggressive, but very talented. He is also a very intelligent man.

Here is my problem with them. WHY DID Tony leave Chicago and a career that was flying high? WHY DID Zeke stay in Monticello when his reputation could have gotten him plenty of clients in the major leagues. Please no conspiracy theories.

Good story of my relationship with Billy Parker: I had a horse in the final of the Yonkers Trot that was about 1,000,000-1 from post 8. Mike Lachance was scheduled to drive and the helicopter he was on coming from the Meadowlands was in the vicinity but hadn’t landed. The presiding judge forced me to immediately name a replacement. I put Billy down and Mike and I watched him steer the colt perfectly to a fourth-place finish from an impossible spot.

Joel Kravet asks: Does blasting a 2-year-old out of the gate and going full tilt early on compromise his long-term ability to race?

I would say unequivocally YES. However, the degree of affect will depend on the durability of the horse.

Most trainers try to race their babies frugally. Unfortunately, there are those that don’t relish the control. Continentalvictory was a great example. The filly loved the front end. The few times she raced in a hole she was less than impressive. In fact, in the Beacon Course (now the Stanley Dancer) Michel Lachance opted to race her in a hole and it was far from her finest hour. It was the week before the Hambletonian and I am sure Michel was thinking ahead to the big dance and wanted to keep a few cards in his pocket.

I believe every quick quarter a horse is forced to go does some damage somewhere whether it be bone, soft tissue, lung damage or mental stress. Over time, they add up.

Therefore, it’s good to believe the more you leave in the tank the longer the racing career will be. My favorite example of this theory was one of my all-time favorite horses: Hardesty — or as my partner Roy Brown would call him “the old man.”

He basically couldn’t leave a step, until Billy Parker taught him to at 12 years of age. He raced 40 starts at 12, the most of any year in his career that started as a 2-year-old. In all, he raced about 250 times and won more than 50 races. Billy O’Donnell gave him his lifetime record at 10 in the Meadowlands. He was a Dream of Glory out of the good mare Bustle dam of some of Doug Ackerman’s finest colts.

Fiona Reynolds asks: I hear trainers and drivers claim “he ran for no reason” pertaining to a trotter making a break. Is this possible?

As I have learned in all phases of life, nothing happens without a reason. When someone says no reason, he just doesn’t know the answer. Usually, the cause is so subtle the driver is totally unaware.

The real reason is, to my mind, most likely slight interference. It could be jumping over a matchstick, a little soreness or even stepping in a soft spot on the track. There are a myriad of reasons none of which in my opinion would include the words NO REASON.

Thanks again to all of you for your kind words. Since racing has resumed I have been spared the evil emails. Most of the attacks now are printed on social media and I find it less personal and easier to dismiss.

Enjoy the fabulous program presented by the Meadowlands this weekend. Saturday’s card is not to be missed.

Maverick will have another qualifier this morning(July 17) at the Big M. Hopefully, team Alagna will right the ship. His previous efforts were more than okay for the average horse, but till now he lacks the fire of his brother Greenshoe. If the project can be fixed, Tony will get the job done.