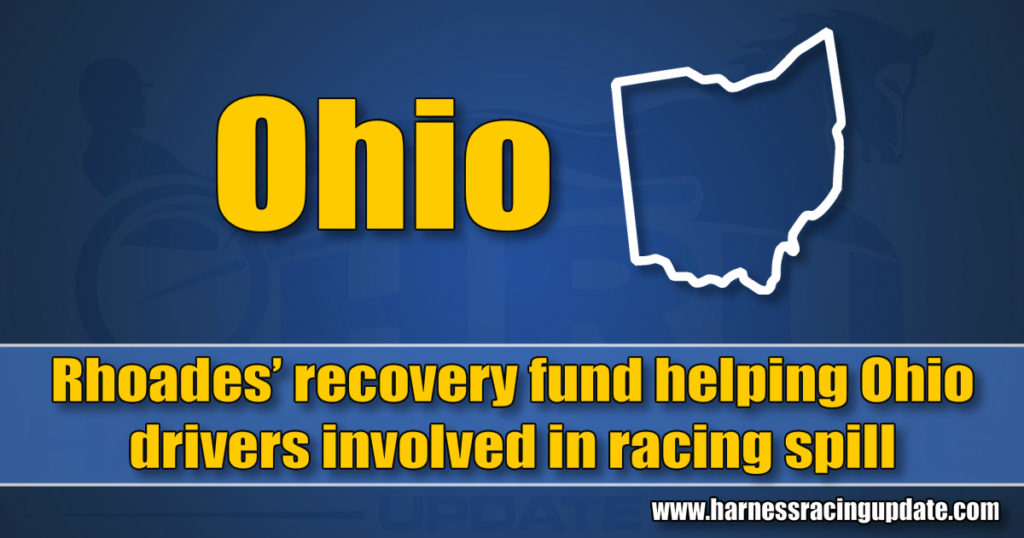 Trainer Bill Rhoades is claiming and racing horses to aid the recovery of drivers Tony Hall, Hunter Myers, Chris Lems and Ryan Stahl who were injured in an accident in May at Northfield Park.

Perhaps it’s because their skills contribute to his often and official welcome to the winner’s circle. Or could it be that the men and women in helmets and stirrup pants that succeed where he struggles deserve a helping hand when they literally fall from sulky grace.

Whatever the reason, Bill Rhoades, currently the second winningest trainer in North America, has seen enough injured harness drivers, and has decided to do something about it following a horrific tangle of horses, the result of an accident in a race at Northfield Park in late May.

Rhoades has since formed the Helping Hooves Driver Relief Fund. His goal is to provide weekly checks for reinsmen sidelined by injury, with the funds coming from a stable of horses purchased for the fund as well as from donations.

Raymond Lance | Driver Tony Hall suffered the most in the accident. He broke seven ribs and had two crushed vertebrae.

Four drivers – Tony Hall, Hunter Myers, Chris Lems and Ryan Stahl – were all spilled to the Northfield track surface after Stahl’s mount (JK Parlay) tumbled to the ground and three trailing horses went over him in the 13thrace on May 27.

Stahl and Lems walked off the track, but Hall and Myers suffered serious injuries.

“I was watching the races at home on television and saw the accident,” said Rhoades. “It was a bad one, and right after it, my phone blew up. Everybody was concerned. They wanted to know how serious it was.”

It was very serious. Myers suffered fractured cheek bones and a dislocated jaw. Hall took the worst of it. He broke seven ribs and had two crushed vertebrae.

“Tony is a buddy of mine,” said Rhoades. “When he went down, that sealed the deal for me. What first got me thinking about the fund was an accident earlier this year (on Feb. 15) involving Aaron Merriman driving one of my horses. He hit the ground so hard, it cracked his helmet and he had a concussion.”

Merriman remembers the fall that sent him to the hospital and the sideline.

“I hit my head pretty good,” he said. “I was unconscious for a quite a while. It really shook me up. I ended up with one of my many concussions.”

While he hopes to never get a check from the Drivers Relief Fund, Merriman applauds Rhoades for his initiative.

“It’s a great idea,” he said. “He ran it by me and I loved it. Billy took my accident with his horse personal. He’s come up with a great way to give back to the industry, to show that he really cares. He’s doing a phenomenal job.”

While Hall was unavailable for comment, Merriman says he speaks with him daily and that Hall is doing well.

“He’s back to his wisecracking self,” said Merriman. “I wouldn’t be surprised to see him driving again by late summer.”

Rhoades said Hall will be getting the first HH Driver Relief Fund check this month. He said it will be for $1,500.

“I’m not taking any money for the training of the Relief Fund horses,” said Rhoades. “That saves us about $2,200 a month. All the monies we receive through purse earnings or donations will go to drivers. If we lose a horse via the claim box, we’ll replenish the stable.”

Rhoades, whose drives are few and far between, said he wouldn’t take a dime if he has an accident.

“My record is terrible (nine winners from 176 drives in 14 years),” he said. “Maybe I’m not going fast enough to get in trouble.”

Rhoades made the H H Driver Relief Fund a nonprofit organization by successful applying for a 501c3 exemption. Leah Rhoades, Billy’s wife, is the president of the fund. Owner Craig Stein is the treasurer. Randy Ringer, a horse enthusiast, is the secretary.