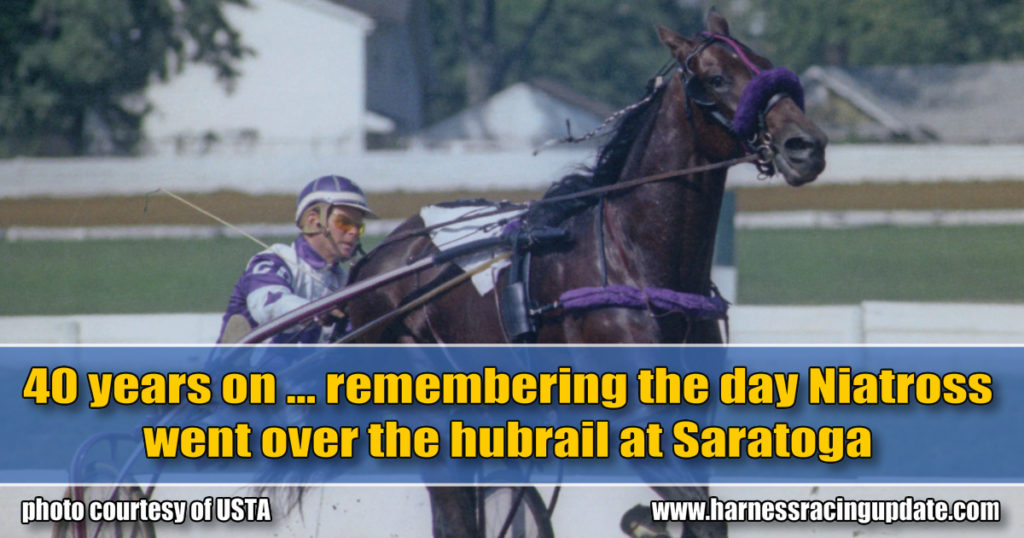 A little more than 40 years ago, across the street from Saratoga Race Course’s famed Thoroughbred Graveyard of Champions, Elsie Berger’s undefeated 3-year-old pacing colt Niatross went to post in the $100,000 Harold “Hap” Haswell Memorial at Saratoga Harness, the culmination of Grand Circuit Week named for the former racing secretary there.

And while many of the greatest thoroughbreds, Secretariat, Man o’ War, Gallant Fox, Affirmed (on a disqualification), American Pharoah and Rachel Alexandra, lost at Saratoga Race Course, arguably two of the greatest trotters of all time, Nevele Pride and Mack Lobell, had set world records in their Saratoga harness appearances. Nevele Pride set a world record, 1:56.4 on the half-mile track in 1969 that lasted for 19 years until Mack Lobell won the Breeders Crown Aged Trot in 1:56.

So Niatross, who was 19-for-19 for driver/trainer Clint Galbraith, would be okay, right, when he went to post at Saratoga Harness on July 5, 1980? He’d likely break Sundance Skipper’s 1:56 track record and threaten Falcon Almahurst’s world-record 1:55 2/5, wouldn’t he?

If anybody was going to upset Niatross, it would be Trenton Time, trained by Cammie Haughton and driven by Billy Haughton. Trenton Time had finished second to Niatross in the Battle of Brandywine and in the second heat of the Cane Pace. Trenton Time was 13-for-19, but the day before the Haswell, Billy Haughton wasn’t optimistic. “Niatross would have to be sick or something,” he said. “That’s the only thing I can think of. He’s an awful nice horse.”

The morning of that July 5 was unseasonably cold and wet, a day more akin to the late fall than the middle of the summer. Intermittent rain helped keep the crowd down to only 7,065 and turned the half-mile oval into a muddy mess. Saratoga officials decided to postpone the Haswell post time for an extra 50 minutes to allow the maintenance crew to scrape and re-sand the track, which was upgraded from “sloppy” to “good.”

During the delay, Cammie Haughton noticed that Niatross had three blankets on him. “Now it’s good to keep a horse warm, especially if there’s a delay, for their muscles might tighten up,” Cammie said. “But they had three coolers on him. I thought it was rather peculiar. So did my dad.”

The ensuing Haswell may have been the most peculiar harness race ever.

Almost all harness tracks had a two-foot hub rail to keep horses from going into the infield. It did not work that afternoon.

Niatross and his driver/trainer Clint Galbraith took the lead from longshot Danielle’s Romeo and top Saratoga driver Jean Paul Morel, and hit the quarter-mile in :30. Niatross reached the half-mile in 1:01.2, only three-fifths of a second faster than the horses in the previous race, a $3,000 conditional pace. And that was before the track was improved. Hoping for a record performance by Niatross, the crowd booed.

Billy Haughton sent up Trenton Time to challenge Niatross after the half. They paced a third quarter in :28.4, reaching three-quarters in 1:30.1, with Niatross only a desperate nose in front.

“I knew I could have gone by him at the three-quarters,” Haughton said. “I saw he was laboring. He just wasn’t right.”

Trenton Time was going by Niatross at the head of the stretch. Galbraith, for the first time ever, used his whip on Niatross on his right side. That induced Niatross, shying away from the whip, to bear to his left. But there was no room on his left. Niatross went right over the hub rail, taking Galbraith and the sulky with him.

Galbraith was hurtled to the infield ground. Niatross somehow managed to twist his body as he fell, landing and immediately bouncing back up facing the opposite direction with the sulky still attached.

The incident happened right in front of Danielle’s Romeo, allowing Morel to see exactly what happened. “That horse is not used to being hit with the whip,” Morel said. “He got scared. He made a U-turn.”

Miraculously, neither Galbraith nor Niatross were injured.

“The colt is all right, and I’m all right,” Galbraith said. “It’s the first time I hit him. He went sideways and jumped the rail.”

Then Galbraith left the paddock in tears, sitting alone on the steps of the racing office, obviously still shaken.

Trenton Time had won the race by one length in 1:59.3. In the winner’s circle, Billy Haughton handled the reins to Cammie and went to console Galbraith. “Billy felt almost as bad as I did because of what happened to the horse,” Galbraith said. “We were good friends.”

Years later, Galbraith still wasn’t sure what happened to Niatross that afternoon at Saratoga: “Maybe he had a touch of virus. I just don’t know what was wrong with him that day.”

Just a week later, in a $25,000 elimination heat for the $1 million Meadowlands Pace, Niatross made a break for the only time in his career. He recovered to finish fourth, and since it was the fastest fourth of the eliminations, he qualified for The Meadowlands Pace final.

Whatever was wrong with Niatross disappeared the following week when he captured The Meadowlands Pace. He added every single stakes left in his 3-year-old season. He never raced again, retiring to stud with a career record of 37 for 39.

Before he concluded his 3-year-old season, Niatross raced in a time trial at Lexington’s Red Mile track. On October 1, 1980, hoping to break the 1:52 all-time record set by Steady Star in 1971, Niatross paced a mile in 1:49.1, the equivalent of 14 lengths faster than Steady Star.

He’d broken the record for fastest horse ever by nearly three full seconds. He truly was the horse of a lifetime.

He was named the 1980 Horse of the Year and theNew York Post’s athlete of the year over humans.

Then Niatross sired Nihilator, who won 35 of his 38 career starts for Billy Haughton.

At the age of 19, Niatross went on a tour of tracks around the country to promote harness racing. The response was so positive that he did it again the following year.

But he never went back to Saratoga.