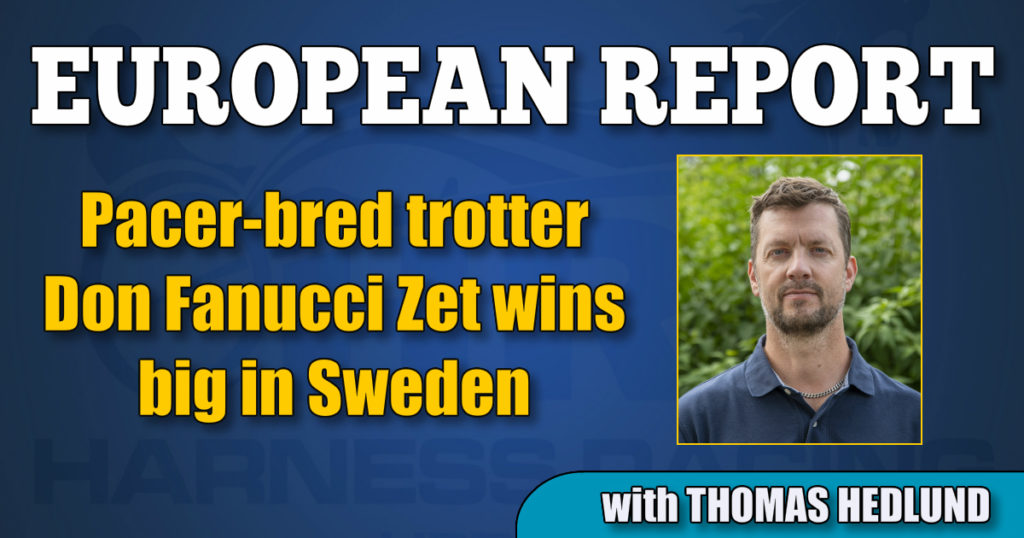 Green Manalishi was the bettors’ first choice in the first out of three elimination heats for the $255,000 Sprintermästaren, but Stefan Melander’s trotter had to fight from post 8 over the mile, on a 5/8 mile track, which is tough for every horse.

A first turn three wide ended in a first over race and leader Bythebook (Googoo Gaagaa) looked unbeatable the whole way. So Svante Båth’s Bythebook finished the last half mile in :55.2 and driver Erik Adielsson had everything under control over the home stretch. Bythebook came home to win in 1:53.4. Green Manalishi held strongly as runner up and Usain Töll claimed a spot in the final as third after a pocket trip.

Guzz Mearas (Muscle Mass) and Johan Untersteiner was the answer in the second elimination and Untersteiner served his horse a perfect trip in second over, while Osterc was eager in front for Erik Adielsson. Osterc held to third place and Guzz Mearas disarmed first over trotter Upset Face in great style over the stretch. Winner time: 1:54.

Hard Livin son Don Fanucci Zet was the fastest elimination winner and Daniel Redén’s trotter didn’t get a free ride to victory. Don Fanucci Zet was three wide in first turn and when in front, a spicy Gerry set the pace high on the outside. Still, Redén’s horse was superior and second over trotter Click Bait couldn’t challenge the winner, who noted a 1:53.2 mile.

In the final, Bythebook drew post 1 behind the gate, Don Fanucci Zet 2 and Guzz Mearas 3, approached and drivers and trainers did their best to get horses ready for the second heat of the night. Green Manalishi raced without shoes and with closed bridle, a first time combination for him and from post 9, behind Bythebook and Don Fanucci Zet. But the Stefan Melander trained Green Manalishi disappeared from the race at an early stage since went off stride behind horses and in front, Bythebook easily kept the lead the first 100 meters. Then, in the first turn, Usain Töll and Wim Paal gave their all to try to reach front position which costed power and Paal had to accept position first over.

Don Fanucci Zet was served a trip in second over and driver Örjan Kihlström opted to leave that position at mid backstretch. That move forced Don Fanucci Zet to race three wide in the last turn, but when Usain Töll’s power was out, the Hard Livin son got close contact with leader Bythebook.

And Don Fanucci Zet disarmed Bythebook with 200 meters to go, but at that point, two chasers from inside positions got their space to speed, Click Bait on the outside of Don Fanucci Zet and Guzz Mearas on the inside. But nothing could stop Don Fanucci Zet in Sprintermästaren final on Thursday night. Örjan Kihlström spoke about the great mentality of the horse after the big victory and he also mentioned the unlikely progress that Don Fanucci Zet has experienced since April this year.

”He is just such a nice horse to be around. He is calm, he almost stops and wants to take a look at the environments around the track just seconds before we have to go behind the car and when the race is on, he really focuses on what he shall do. I was very confident after the elimination, but you never know what happens in a new race. I’m very happy that this horse won the race,” said Kihlström after the big win.

Don Fanucci Zet (Hard Livin—Kissed By The West) was, as HRU published before (full story here) bred with a pacing mare and purchased in Lexington by Redén in 2012.

“And that’s why I’m so very proud right now. This is a horse that we’ve built with a stud of ours (Hard Livin) and a mare that I couldn’t get to trot. I don’t know where this will end, maybe this is a new breed in our sport,” said Redén.

Ten 4-year-old mares had qualified for the final of $171,000 Stosprintern at Halmstad racetrack, Sweden and the Thursday night show became sparkling with an upset winner in Grande Diva Sisu (Ready Cash).

Per Nordström is trainer and driver behind the Stosprintern winner and he did everything perfectly in the race at Halmstad. In the eliminations, Grande Diva Sisu was first choice in her heat, but a front trip ended with second place, a fact that most certainly made her a winner in the final. Nordström opted post nine, behind horses, in the final and he found a perfect cover trip in third over, with favorite Golden Tricks in front of him.

The 4-year-old Ready Cash mare won in 1:54.3 and collected the biggest triumph in her career. In May, Grande Diva Sisu showed great capacity as runner up in $215,000 Drottningpokalen, from post 12 and there’s no doubt that Per Nordström’s mare is one of the hottest horses ahead of the big races Stochampionatet and Derbystoet later this season.

Vivid Wise As back as a winner

Elitloppet favorite (ahead of the eliminations at Solvalla in May) Vivid Wise As (Yankee Glide) has returned to his Italian trainer Alessandro Gocciadoro and showed that he was back in business for real when he won $202,000 Gran Premio Turilli in Rome on Monday night.

World record trotter Zacon Gio lead the race and Vivid Wise As followed behind before Gocciadoro gave his horse the signal to attack at the home stretch.

Alessandro Gocciadoro had a great night in Rome. In $202,000 Gran Premio Tino Triossi for 4-year-olds, Andrea Guzzinati steered Gocciadoro’s Always Ek (Filipp Roc) to safe victory after a trip in third over. Always Ek swept the field during the race’s last 700 meters and impressed in 1:56.3 over 1.3 miles.

Vincennes in Paris had a nice race card on Tuesday night and Gu d’Heripre (Coktail Jet) impressed a lot from position first over in $95,500 Prix Phaeton.

Franck Nivard drove the talented 4-year-old and had control of his opponents all the way in mile rate 1:58 over 1.6 miles.

Gu d’Heripre belongs in the top of the French crop born 2016 and Philippe Billard is the trainer.

Sébastien Guarato trained Green Grass (Bold Eagle) hit the lead a half mile into the $95,500 Prix Paul Leguerney for 4-year-old mares and was never challenged seriously. Mathieu Mottier sat in the bike and the duo came home in 1:57.3 over 1.6 miles.