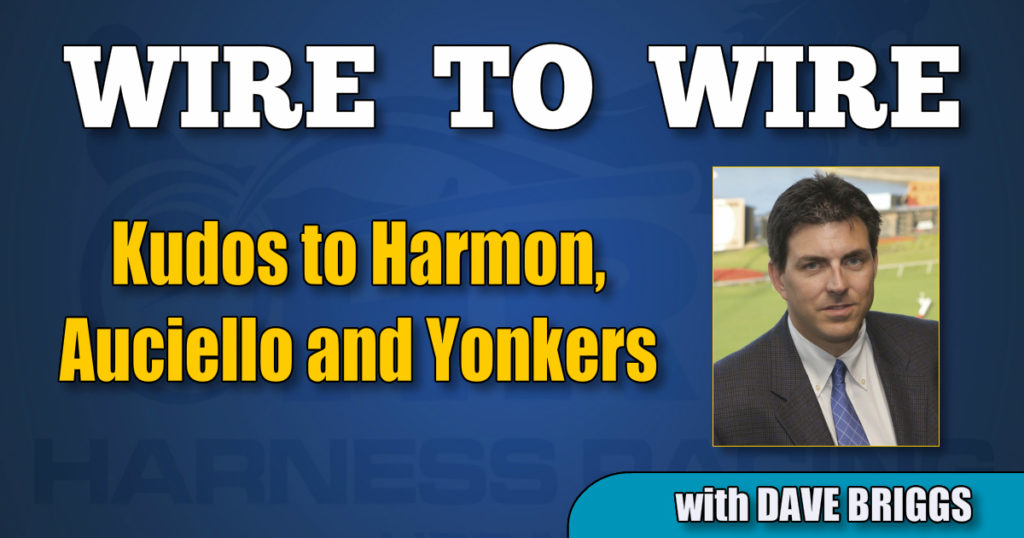 Kudos to Harmon, Auciello and Yonkers

Horses last trained by Rene Allard and owned by his mother, Danielle Henri, were scratched this week.

The overwhelming majority of those that took the time to contact me were supportive about the need to err on the side of caution, for now, about Henri-owned horses last trained by her son.

That’s exactly what happened this week when trainers Rob Harmon, Carmen Auciello and Yonkers Raceway decided it’s not in their best interests to be involved in training or allowing those horses owned, in part, by Henri to race at this time.

All six horses mentioned in the column were scratched either by the track or trainers.

Kudos to Harmon, Auciello and Yonkers and others for taking that position. I wanted to acknowledge them with the same prominence in HRU in which I first mentioned all of their names. I owe them all at least that.

Some of those that made contact were critical of my naming Harmon and Auciello. Fair point.

Let me be clear, I have never believed Harmon or Auciello to be dishonest operators. Neither has any concerning violations on their record according to a search of the United States Trotting Association (USTA).

In both cases, they were simply trying to help out a few of their long-time owners who happened to be partners with Henri on a few horses.

Auciello had only entered horses in qualifiers before scratching. No harm, no foul.

Harmon told me he specifically asked Yonkers if it was okay to race Blaise MM Hanover and he was given the green light. That’s on Yonkers, which was another major theme of the column; the need for regulators and racetracks to do better.

When it came to Harmon and Auciello, what I questioned was, “why any trainer would touch horses last trained by Allard is beyond me, but you can bet the fact the six horses mentioned above have earned over $1.6 million combined has at least something to do with it.”

Harmon and Auciello are talented and widely respected. My point was they don’t need to take these horses at this time and risk their reputations being tarnished. Their decision to walk away would suggest they agree.

Let me be clear on a few other points.

I did not and do not think Harmon and Auciello were or are beards for Rene Allard and did not write that they were. However, I can see how some readers may believe I implied it by what I wrote at the end of the column. That was not my intent. Eleven paragraphs after either of the trainers was last mentioned, I wrote, “As most of us know, beard trainers are not new. Simply transferring horses to a different name, thumbing one’s nose at authorities and carrying on as usual, is not new. But how the people in charge address integrity matters urgently needs a new approach, now more than ever.”

Here’s why I think those that defended Harmon and Auciello have a valid point: both association and perception often equal reality in the reader’s mind.

Similarly, perception is often reality in terms of harness racing integrity. Clearly, we have a perception problem in harness racing. It doesn’t matter much if that’s fiction if our customers believe it to be true.

Again, that was a major theme of the entire column. In a sport in which integrity challenges are threatening the industry’s entire existence and dishonest trainers are blatantly stealing from the honest ones, the perception of malfeasance is particularly powerful and we need to be cautious until matters are fully resolved.

Remember, the care and welfare of horses has to be tantamount. The people that wager their hard-earned money need to know the game is as fair as possible.

Also, I did not write that Allard is a hidden owner on horses owned by his mother.

I also did not say Henri is doing anything wrong by owning horses. She is legally entitled to do so until racing regulators say otherwise. (Editor’s note: For the record, Henri was offered a chance to respond and said an email response is forthcoming. The email did not arrive before press time on Thursday evening, but we will publish it on Sunday if we receive it before that issue goes to press).

But, please remember, racing horses, like having a license to drive a car, is a privilege not a right. Just because you are a licensed owner does not mean a trainer has to take your horses, nor does it mean a racetrack has to take your entries. It’s up to the race office to decide how to build a race card.

Yes, D Racing Stable Inc. horses have also shown up at other racetracks and continue to do so. Should I have named every single case in which it was occurring and all the trainers involved? Perhaps, but that would have made for a long column belaboring the same point. As stated in the original column, the point wasn’t to do an exhaustive list of where all the horses landed and name all those that were training them, but, rather, point out Henri’s horse are showing up in entry boxes, show a few high-profile examples and suggest that, perhaps, racetracks and regulators might want to be cautious.

Clearly, I was picking on Yonkers, but I did so because three of its top 10 leading trainers at the time of the arrests, including Allard, are accused in the alleged horse doping scandal.

For those that ask why I didn’t single out other horses such as star trotting mare When Dovescry in the column, it’s important to point out that while she was previously trained by Rene Allard, she doesn’t list ever being owned by Henri or anyone else in the Allard family. The owners are entitled to have Brett Pelling, or anyone else for that matter, train her and I wish all the connections luck.

The key point here is the need to be cautious about an Allard family ownership connection to those horses formerly trained by Allard until either a thorough investigation following the money can be done to ensure there’s no hidden ownership — which is illegal — or Allard’s case is resolved.

Again, I did not and am not saying Henri did anything illegal. I just want the regulators to be thorough and make sure everything is in order. After all, that is their job.

Racetracks and regulators can ignore that advice if they want. Some clearly have. D Racing and Allard Racing horses continue to race and win other places. It’s not just a Yonkers issue. I just pointed out this was happening so there is full disclosure and regulators took a long look.

Please remember, Henri is not faced with only two options here: race these horses or not. She also has every right to sell her shares in those horses for what they are worth. Word from Auciello posted online appears to indicate that is exactly what is in the works. Of course, Henri is free and clear to do what she wants with the proceeds. She also has the right to buy other horses and place them with whatever licensed trainer chooses to take them and racetracks and regulators can decide if they will be allowed to enter.

Again, the poor optics comes from horses previously trained by Allard and still owned by his mother. It’s a bad look.

Also, for the record, I did not say Allard had been indicted. I wrote, “Allard and 28 other standardbred and thoroughbred people were arrested and accused of a variety of troubling crimes related to horse doping.”

I also wrote, “the charges against him and the others have not been proven in court.”

Of course he and the others deserve their day in court.

You have my word that whether he is cleared or convicted, we will prominently report the result either way.

But coming back to perception again here, what the U.S. Attorney’s Office for the Southern District of New York has released about the case is extremely troubling, especially for anyone that purports to love horses.

For anyone thinking I’m unfairly picking on Allard here, please take a minute to process what was alleged in this Bill Finley story published in HRU on March 15. Feel free to also read the full sealed complaint (full document available here):

The sealed complaint against Allard lays out instances where he allegedly used and “misbranded” illegal drugs to improve the performance of his horses. He has been charged with “misbranding,” which carries a maximum sentence of five years in prison.

Perhaps the most disturbing part of the sealed complaint does not directly involve Allard but is the text of an intercepted phone conversation between Louis Grasso and Ross Cohen, both of whom were among the original 27 people indicted, where they joke about horses of Allard’s that died, allegedly, because of the use of illegal drugs. Grasso is a veterinarian and Cohen, according to the original indictments, is someone who was distributing PEDs.

The conversation reads (and note this appears exactly as it did in the sealed complaint in terms of grammar and spelling):

Grasso: (Laughter) well I didn’t get any more emergency calls yesterday so I am assuming

Cohen: Jeez. What were you thinking?

Grasso and Cohen continue to discuss the effects of the drugs on the horses.

Cohen: Ok, maybe it was just the batch that Allard got I guess I don’t know.

Grasso: They got high fever kidneys shut down.

Cohen: Holy f-k did they do an autopsy?

The sealed complaint includes the deposition of FBI agent Bruce Turpin, who states that Allard’s barn was raided on or about March 9. He was stabled at the training center in Middletown, NY run by (Richard) Banca. Turpin testified that the raid yielded multiple empty syringes, the drug Glycopyrrolate, epinephrine and vials labeled “Thymosine Beta” and “for research purposes only.”

The court filings also include the text of an intercepted text message from Allard to Grasso, which read: “I need 3 bottles of red acid to go to Canada Thursday.” According to the FBI, red acid is administered to mask physical injuries in racehorses, thereby increasing the risk of injury while racing. Red acid was one of the PEDS that (Nick) Surick allegedly was using on his horses and distributing to others.

Those are serious allegations.

Yes, of course, the feds need to prove Allard did something illegal. Yes, I have heard some legal analysts suggest the case is weak. I don’t know. We’ll see.

But should the industry chance it?

Is that smart business?

You be the judge.

After reading what is alleged, I want you to ask yourself if the most prudent course of action is to press pause on D Racing Inc. until thorough investigations can be done to ensure the stable has no connection to a trainer accused of something so heinous.

Being cautious on this one places the integrity of an entire integrity-challenged industry ahead of an individual’s rights.
Sounds like Harmon, Auciello and Yonkers agree. Good for them.