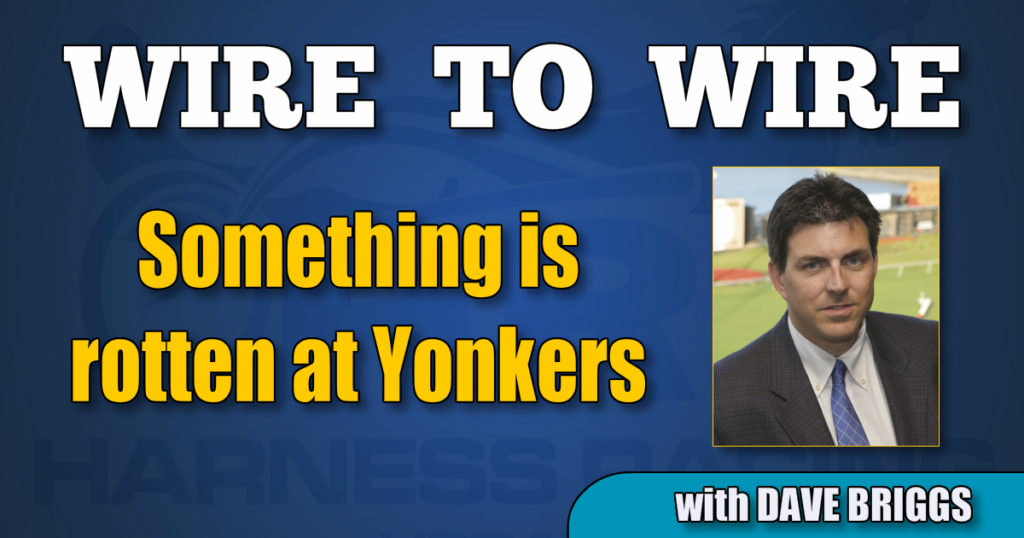 Something is rotten at Yonkers

Horses last listed as being trained by Rene Allard and still owned, in part, by his mother, are showing up in the entry box at Yonkers a little more than three months after Rene was arrested and accused of horse doping.

Just a little more than three months after FBI arrests were widely hailed as the first, and much-needed, step in improving integrity in horse racing, Yonkers Raceway and racing regulators in New York are in danger of deeply tarnishing the sport over one of the accused — trainer Rene Allard.

In March, Allard and 28 other standardbred and thoroughbred people were arrested and accused of a variety of troubling crimes related to horse doping (full story here).

Recently, horses last listed as being trained by Allard that are still owned, in part, by his mother, Danielle Henri, began showing up in the entry box at Yonkers where Allard was the second leading trainer at the time of his arrest.

The United States Trotting Association (USTA) lists the D Racing Stable Inc. as being solely owned by Henri, who, as an aside, is the former mayor of Rene Allard’s hometown, tiny Saint-Esprit, QC (from 1996-2009). She is also listed by the USTA as the sole owner of Allard Racing Inc. based in Quebec. Though it is believed she still lives in Quebec, D Racing Stable Inc. has its address listed as Middletown, NY, which is strange.

The gelded pacer Blaise MM Hanover, that is entered in the $33,000 open handicap on July 2 at Yonkers, is an interesting case.

Before Rene Allard was arrested in mid-March — and please note that the charges against him and the others have not been proven in court — the pacer was trained by Jose Godinez.

On March 7, Rene Allard claimed the gelding for $40,000 at Yonkers on behalf of Henri’s Allard Racing Inc. and Earl Hill, Jr. of Ohsweken, ON. The next week — the same week Rene was arrested — Blaise MM Hanover was entered to race on March 14 at Yonkers with Rene listed as trainer. That card was ultimately cancelled due to the COVID-19 pandemic, but on April 8, the ownership of the horse was “changed” to Henri’s D Racing Stable Inc. and Earl Hill, Jr. of Ohsweken, ON. Same owners, just a different stable name being used by Rene Allard’s mother, Henri.

Now Rob Harmon is listed as the trainer on Blaise MM Hanover for his July 2 entry at the New York track.

All that would suggest that since the horse was last known to be in Rene’s barn, the owners have not changed and Rene’s mother is still involved, that Rene is still involved in some capacity with the gelding while facing serious horse doping charges.

In short, something stinks to high heaven.

At the very least, the Yonkers race office or the New York State Gaming Commission should have erred on the sides of caution and optics and barred Blaise MM Hanover’s entry — and other horses that appear to have a similar connection — until it could definitively prove Rene Allard is not involved with the horses.

The welfare of the horses and fairness to both the betting public and the other horsepeople that have allegedly been fleeced by crooked operators, should take precedent.

On Monday, the qualifier entries for Yonkers lists five horses that had their last pari-mutuel starts with Rene Allard listed as trainer that are all owned, at least in part, by Rene’s mother, Henri.

Sandy’s Beach and Birch Island Betty are in the first qualifier, Ostro Hanover in the second and Keystone Phoenix and Ourlittlegeneral A in the third. All five are now listed as being trained by Carmen Auciello.

Why any trainer would touch horses last trained by Allard is beyond me, but you can bet the fact the six horses mentioned above have earned over $1.6 million combined has at least something to do with it.

Birch Island Betty was solely owned by Henri’s Allard Racing Inc. prior to April 3 when it was changed to her D Racing Stable Inc.

Likely, there are others. I didn’t do an exhaustive search of where every horse Rene was training when he was arrested has landed, but you get the point.

And, yes, those last five horses are in qualifiers without wagering or purses, so no real damage done, yet. But racetracks everywhere — especially Yonkers which already has a huge black eye because three of its top 10 trainers are caught up in the FBI allegations — should be ultra-vigilant on integrity matters now, even in qualifiers.

Yes, I hear some of you laughing.

I am not naïve enough to expect either will suddenly do better, but a guy can dream.

Most assuredly, if I can quickly connect the dots, racing regulators should have, long ago, done the same and banned entries in the best interest of the game that employs them.

As most of us know, beard trainers are not new. Simply transferring horses to a different name, thumbing one’s nose at authorities and carrying on as usual, is not new. But how the people in charge address integrity matters urgently needs a new approach, now more than ever.