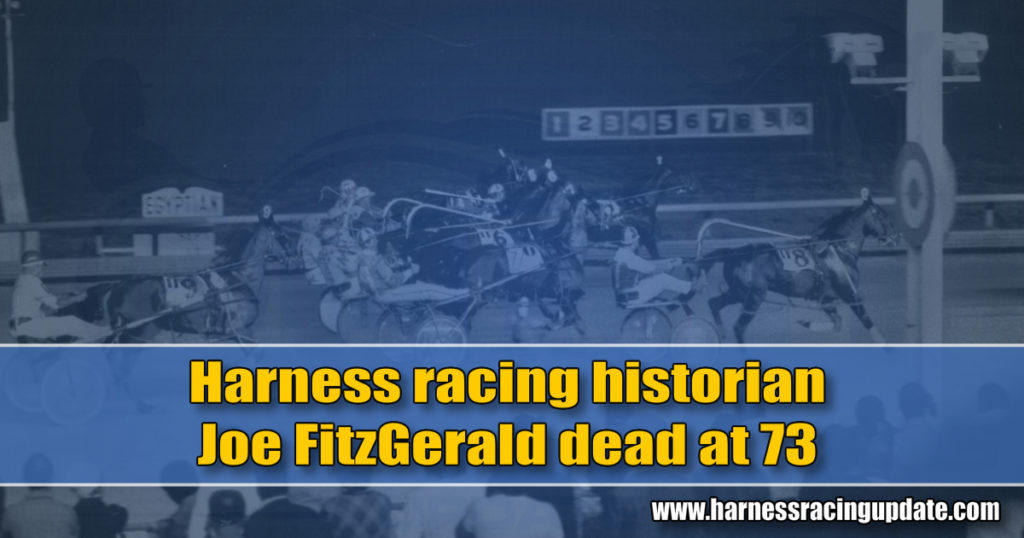 On June 22, 2020, Joe FitzGerald of Quincy, MA died suddenly at 73. According to his obituary, he is survived by dear friend Mary Ellen Manning, his sister Nancy Papy and three nieces, along with many cousins. Joe was a foreman at a construction company before retiring.

To most readers of Harness Racing Update, Joe was known for his deep love for harness racing. It’s not overly difficult to decipher that passion when his screen name for the comment section in the Boston Globe was “Overtrick”.

Joe was an extremely gifted writer and over the years he displayed this prodigious skill in various harness racing publications. Joe wrote prefaces and reviews for Bob Marks’ books, and as most of you know, when a good writer like Bob asks you to take on that task, you have your harness racing bonafide.

Most of us “met” Joe for the first time on Twitter by following his Twitter handle, @Jaf3Joe. There, almost daily, he’d recount a harness racing fact, some from many decades ago. The way he’d vividly describe these events, you’d think he was on the tarmac for each and every one of them.

It was also on Joe’s Twitter feed where we got to witness his wonderful tongue in cheek sense of humor.

I remember when Forbidden Trade beat Greenshoe in the Hambletonian, but was still was ranked behind him in the following Hambletonian poll, Canadian fans were upset. Joe played along, tweeting about how it was probably a conspiracy, and that the Hambletonian Society owes a giant apology to all of Canada.

Personally, Joe was always extremely nice to me and I enjoyed our conversations immensely. Joe would sometimes read something I wrote and very gently point out a word I’d incorrectly use, or poor grammar. I’d re-read and realize how dumb I was. But Joe never did it to make me feel dumb, because that wasn’t him. He was one of those people that you feel was the smartest person in the room, but didn’t want anyone to know it. I’ll miss his modesty; I’ll miss his good nature.

Due to COVID-19 issues, Joe will be buried in a private ceremony. But, as trainer Paul Kelley (another person who crossed Joe’s path on the Internet and struck up many conversations) informs me, the services are being taken care of by a funeral home once owned by Al Thomas, the former owner of Bay State Raceway, which later become Foxboro. How fitting.