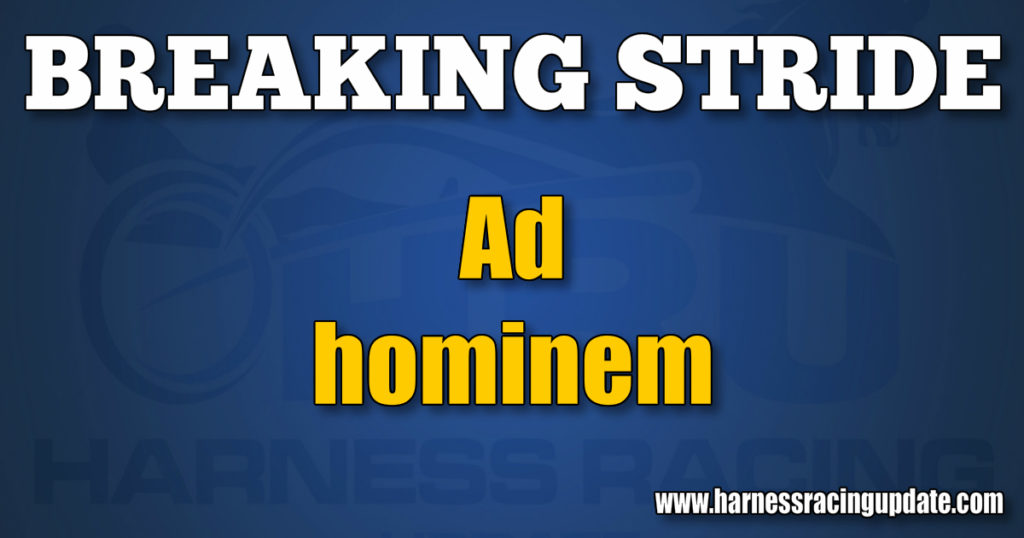 Just as I was turning the corner of Main and Biltmore, a woman wearing oversized sunglasses, green stretch pants, a purple Corona virus mask, and wireless earbuds, briskly walked into the intersection without looking. I hit the brakes and fumbled unsuccessfully to find the horn as she strolled across Biltmore, oblivious to her near-death experience.

I grumbled, “Jane, you ignorant slut!”

From the passenger seat, David snapped his fingers, pointed at me, and said, “Dan Aykroyd, Saturday Night Live, confronting Jane Curtin during Weekend Update. Jane would make a lengthy, intelligent point, and Dan would start his counterpoint with that phrase.”

He continued, “Did you know that type of reply is called an ad hominem, Latin for ‘against the man.’ Ad hominems attack the person, or more specifically, their character, their personality, or their physical appearance. They are weak arguments used to discredit. When exaggerated, they can be funny.”

I rolled my eyes and said, “David, you tedious intellectual from Silicon Valley.”

He gave me a thumbs up.

I continued, “Or how about, shut your gob, you rich bastard from nerd land?”

He nodded, “Indeed, and may I further point out that immature people use ad hominems because they are unable to counter their opponent using logic and intelligence.”

“And may I point out that under my seat is a bludgeon.”

We both had a little bubble of laughter.

“Seriously,” he continued, “Conflict is entertainment cocaine. Without different views, holding an audience is difficult. Trump didn’t rise to prominence for being neutral. He took a position on an issue (often several positions) and barked loud and long to mesmerize his audience. He revs people up, most of his tweets are strings of Ad hominem’s – Wacky @NYTimesDowd, who hardly knows me, makes up things that I never said for her boring interviews and column. A neurotic dope!”

“Of course not. But audiences on both sides, eat this stuff up, always have, always will.”

I said, “Harness racing could use revving up.”

I said, “I’m always surprised at how talented our race callers are. And the race handicappers are damned good. I watched the Meadowlands the other night, and they had five top-notch people on the screen, all were very professional, very good.”

Daniel wagged a finger, “Good is not always your friend when it comes to drawing attention. Racing doesn’t need good pre-race and post-race talkers. They would be much better off with a few bad, colorful talkers making over-the-top predictions engaged in wacky antics.”

“A guy like me could do that,” I cleared my throat and used a weird accent, “Richard, if you go another night without picking a winner, your toupee goes out the window.”

I gave him another imitation, “Gwendolyn, the number three horse is a 112 per cent sure thing. If you don’t use Pie in the Face on top of your ticket, you are a mathematical moron.”

He smiled, “You have to tip your cap to guys like Jerry Stiller and feel bad for Rick Blatz.”

“He’s an insurance adjuster. Once upon a time, Rick was a smart, humble, clever, unassuming, non-controversial comic who played to crowds of nobody while comics smashing watermelons or swearing blue streaks got booked.”

David got a bit wound up and lost his uber-cool, “Go look in the mirror. You know damn well that you would enjoy an offbeat character screeching at you, telling you to wager ten bucks on a perfecta because it was a mortal lock. You know you would love to listen to the twisted logic of a blowhard wearing a Hawaiian shirt analyzing every race. And you know you would be entertained listening to gloating when this horse won or complaining when the horse lost.”

I tapped my forehead with my index finger and said, “We humans are silly creatures.”

“Yes, we are. There is good science, psychology, and statistics to support what draws attention and money. We love bold and pompous theatricality. We love to take sides, and the money does not lie in the businesses of entertainment and sports.”

“I just can’t see that sort of crazy personality in a button-down sport like horse racing.”

“Probably not, but a little show biz would help. The structure of your sport has a little automatic drama with each race, followed by a swift and final decision. The results of the races should not be the ONLY drama. The future is through a lens. In my opinion, a horse race, by itself, even with wagering, will not draw new people. Or to put it painfully simple, an engaging show will draw more people than a good horse race.”

“We are a serious sport!”

“Serious sport is an oxymoron.”

“We rely on gambling, that ain’t funny business.” I pleaded.

“Competition is coming in the sports gambling arena. Besides, there is no reason horse racing cannot be entertaining programming AND a gambling entity.”

Grimacing, I said, “The type of shtick you’re talking about sounds sleazy, and that evaluation is coming from me.”

He shrugged. “Maybe, but as H.L. Mencken once opined, ‘If a politician found he had cannibals among his constituents, he would provide them missionaries for dinner.’”

I sighed and said, “David, you are a tiresome provocateur.”