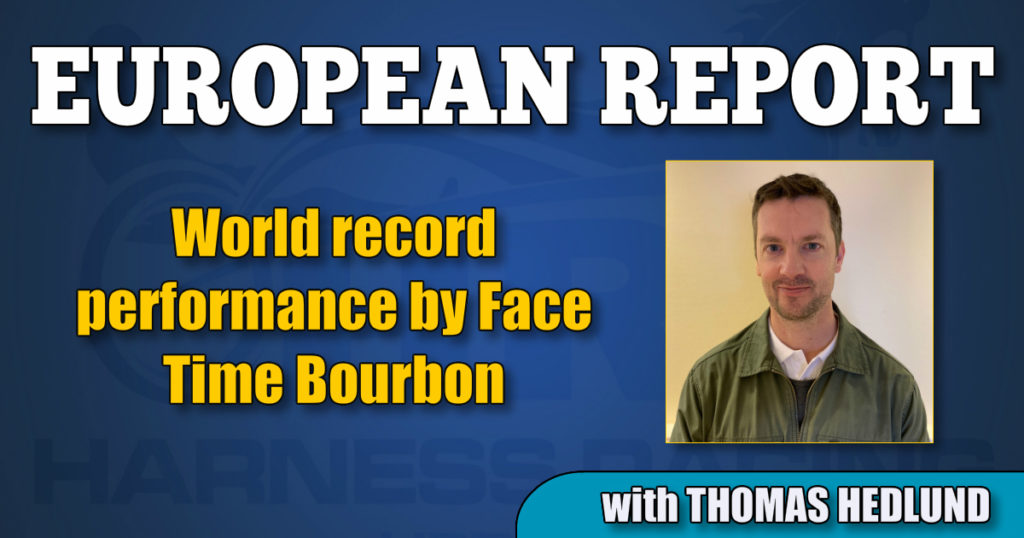 The best trotter in the world? The answer is clearer after Sunday’s $165,000 Prix Réné Balliere at Vincennes racetrack in Paris, France.

Sébastien Guarato’s top trotter and Prix d’Amérique winner Face Time Bourbon hadn’t started since late February this year, but was still in shape enough to perform at his very best over 1.3 miles.

Björn Goop sent the 5-year-old star to the front three wide after the first quarter and spent another quarter-mile outside the leading duo, meaning the first half of Face Time Bourbon’s return race was ultra-tough. That didn’t stop Face Time Bourbon from leaving his opponents in the stretch and the Ready Cash son came home in a mile rate of 1:51.3 over 1.3 miles, which is a new world record performance.

Pierre Vercruysse’s Drole de Jet made a strong effort as runner up, while Feliciano finished strongly for third place.

Driver Goop had his own horses racing in Sweden during the Sunday, but it’s hard to say no to a drive on Face Time Bourbon.

“It’s magic. The horse is truly impressive. It’s a great job done by all of Sébastien Guarato’s team. Face Time Bourbon’s acceleration is exceptional and he was very calm during the race and I found him superb today,” Goop said on TV channel Equidia after the race.

This was Face Time Bourbon’s fifth victory in a Group 1 race, and the champion trotter is still only five years old.

There were several stakes races on the card at Vincennes and 3-year-old Helgafell (Charly du Noyer) continues to consolidate his position as number one in the “H-crop” in France. Philippe Allaire’s star dominated the $164,000 Prix Albert Viel in a safe win from the lead in mile rate 1:58.3 over 1.6 miles.

Allaire also hoped to collect the trophy in the monté race $164,000 Prix d’Essai for 3-year-olds, but his weapon Hudson Vedaquais (Thorens Vedaquais) finished several lengths behind Hope On Victory, who made a break shortly before the wire which resulted in disqualification.

E3, the circuit for European-bred 3-year-olds, is on the schedule at Saturday’s race card at Bergsåker racetrack in Sweden. As usual, the first of the two finals is held over 1.3 miles.

The $202,105 E3 for colts and geldings is an open edition where fresh trainer Daniel Wäjersten’s Global Badman (Yield Boko) was the most impressive winner in the eliminations.

In the division for 3-year-old mares, Trixton daughter Loaded Maria, undefeated after five starts so far, looks to be the first choice, but the race is, like the other division, a very open story and new stars will be born on Saturday afternoon.