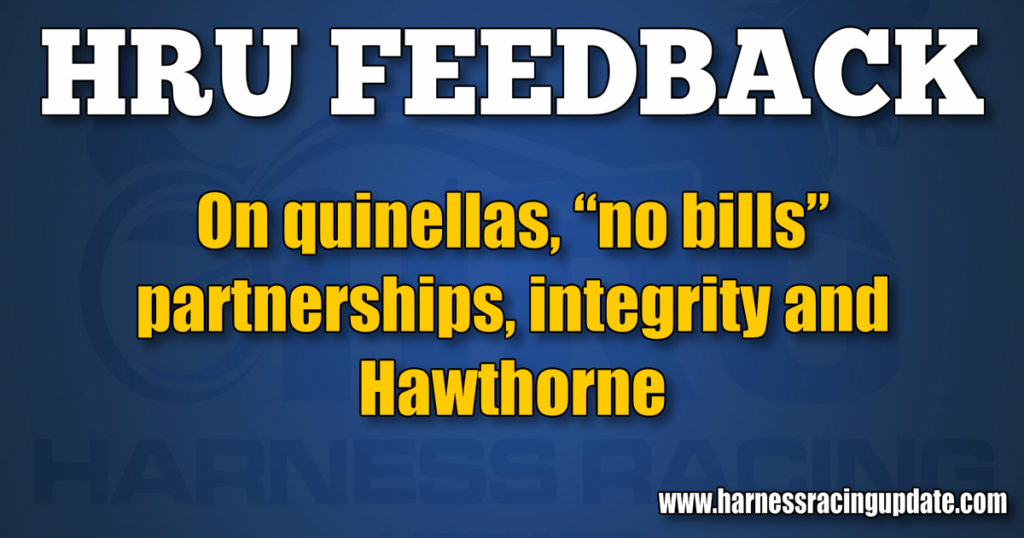 In response to Frank Cotolo’s “Release the Quinellas” (full story here) I’m not sure there is enough interest to “release.” With today’s minimums being so low, $1 Exactas, I can’t believe someone who would bet a quinella wouldn’t just box the exacta? Not much difference between a $1 exacta box and a $2 quinella.

But I do like the direction. Many years ago there was the Big Q. You had to hit 2 quinellas in a row. Let’s expand that to 3 or 4. Multi leg bets are popular now. Let’s combine the two. The Tri-Quinella or Quad-Quinella. Make it a NON JACKPOT bet (I hate those bets). If you don’t hit the four races in the Quad-Quinella, then pay 25 per cent or 50 per cent to the most winning quinellas and carry over the rest.

Right now the gambling world is paying some attention to harness racing again, let’s not waste this opportunity to retain their interest by thinking out of the box.

Beware of “no bills” racing partnerships

These investment opportunities might sound good on the surface. No bills to the investors. The most that one can lose is their initial investment with unlimited upside potential.

“No Bills” – You will have no out of pocket costs whatsoever for this partnership. In return for “No Bills” to you, partnership shall receive 70 per cent of the net purses earned (after trainer and driver deductions), with 30 per cent to investors based on their investment percentage.

But, one should read the fine print of the agreement as I received a big surprise with monthly bills in April and May for training fees and vet fees.

In the agreement, it also states:

1. In a month when Horse does not race, training and all related costs will be the responsibility of the investor.

2. Manager reserves the right to revise Agreement for this and any other Horse you are a party to.

I had both of the above implemented by the partnership and learned the hard way that a “No Bills” racing partnership sounds good but does not always live up to the hype.

The Guru has a point

The exalted Guru indicated in a recent column (full story here) that my thoughts (full story here) regarding the requisite overt alterations to our integrity efforts amount to wasted ink. I am inclined to agree, but for a different reason.

• Thirty plus regulating agencies each with its own licenses, rules, policies, and penalties.

• Too many racetracks and a depleting supply of horses.

• Conflicting individual agendas that compromise efforts to reach a consensus on necessary improvements.

• An aging and evaporating fan base along with their waning faith in our integrity.

There are racetrack owners that have adopted utilizing their “Right of Exclusion” not to replace but to complement commission efforts. There are also several states training drug detecting dogs. Now that the Federal and State Police have enjoined horse racing’s integrity enforcement probable cause will provide opportunities for the canines to visit facilities other than racetracks.

During the last year, my HRU contributions have garnered a wealth of support from horsemen and some regulators who are prevented from going public due to the potential for repercussions. The Horse Racing Integrity Act has a very good chance to become law but not for at least 18 months. My intent in the interim was twofold, to implement new overt integrity initiatives easily interpreted by our public and to enhance the “Right of Exclusion” applications.
At present it appears that the obstacles for immediate action to improve our public perception are insurmountable hence my agreement with the Guru`s verdict, I will not waste any more ink on integrity.

Ronnie, we have known each other for a long time, and you have never stated your affection for me until now. I like you, too.

Here are a couple of things that I feel raise question marks — though not to the level of the FBI doping scandal, nevertheless, it leaves a bad taste.

Both were Friday (6/19) at Hawthorne. I don’t want to name names, as I am not trying to try someone in public court. My point is the actions on the surface look bad.

There is a horse entered whose last five races were lost by 13, 22+, 23+, 24+ and 19+ lengths. The horse is 13 years old and is running in 4k and 5k claimers. When is it time to retire? Maybe I don’t know the behind the scenes as to why he still being entered but PETA would not look kindly on this kind of practice.

Same night, I see a trainer listed on one horse BUT driving another horse in the same race!?! The driver is NOT listed as trainer or owner of the horse he is driving. Yet, it is allowed. And it was allowed last week, as well. There may be a reasonable explanation but as of yet there are no corrections to either horse’s trainers or owners. To me that is a big conflict of interest and goes against integrity.

Like I said, not a doping scandal, but bad enough to taint the sport.