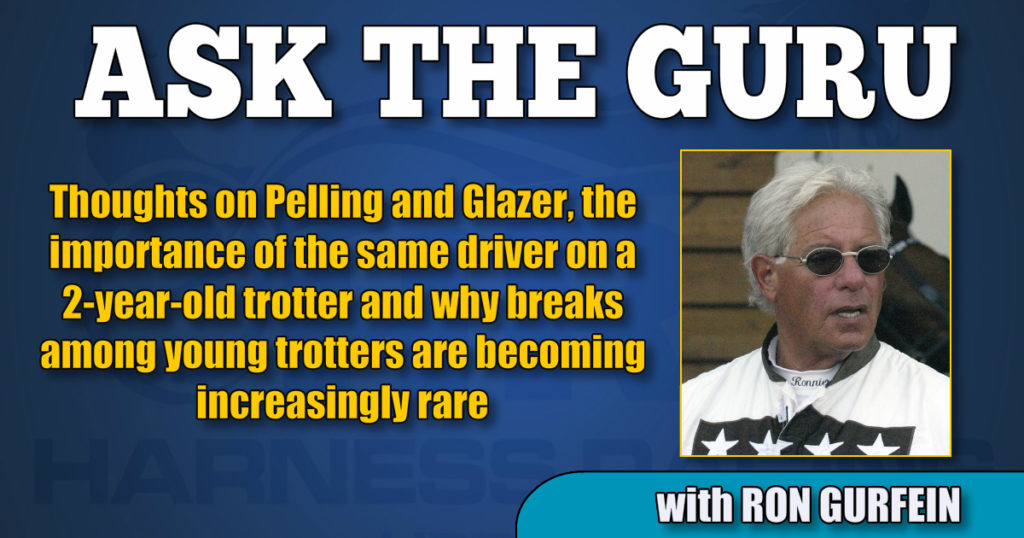 Thoughts on Pelling and Glazer, the importance of the same driver on a 2-year-old trotter and why breaks among young trotters are becoming increasingly rare

Tidbits: JOLENE JOLENE. What more can I say?

I have been looking at yearlings for a lifetime. Until last year there had been four horses that were so talented in the field they had to be in my barn. They were all fillies. Continentalvictory, Bit O Candy, Miss Wisconsin and Vernon Bluechip. The last two both won the Merrie Anabelle. Then two years ago a filly named Crucial, the first foal of Jolene Jolene by Father Patrick, joined this list but was far better than my four if that was possible. She didn’t have the year I expected but she did sell for $200,000 and between racing and breeding this writer predicts she will be a big success.

Last year, Jolene Jolene had a big beautiful Cantab Hall filly, who believe it or not was faster and more athletic. Can lightning strike twice? You betcha.

It’s 2020 and here comes Effable (too great to imagine) and is she ever aptly named. Cantab Hall her sire is 19 years young, simply amazing.

No one ever accused me of being shy with my opinion, but I think we saw a great filly Saturday morning at the Meadowlands. She won in 1:58, last quarter in :27.3 and Brian Sears was like a statue in the bike.

This one could very well be another Greenshoe. By the way, she was well received at the Kentucky Selected Yearling sale being hammered down for $600,000 to Lina Alm for SRL stable. Both fillies were bred, raised, and named at Hunterton Farm/

To my dear friend Chuck Sylvester, congratulations on your 80th birthday. May you have many more.

Murray Brown’s column on Bret Pelling last Sunday (full story here) was a must read. The depth was amazing. Hopefully it answered enough questions for the Hall of Fame Selection committee to remove him from the Pete Rose list and realize that no one is perfect.

For those of you interested in thoroughbred racing, the $1 million Belmont Stake is tomorrow and has an interesting sidelight worth discussion. Patrick Biancone, an excellent trainer, won an optional claimer with Sol Volante at Gulfstream on June 10 in doing so defeated a top Kentucky Derby selection in Ete Indien. Biancone has decided to race his colt back in 10 days and the morning line maker has him tabbed at 9-2. Very odd maneuver in a sport that tries its best to race prime colts sparingly.

Congratulations to Ron Burke, Matt Kakaley and the owner/breeders Burke, Weaver, Bruscemi, and Novak on the wonderful performance of the Sweet Lou colt Lou’s Pearlman. A winner at Gaitway in 1:54 last half in :54.3.cutting the mile and defeating a very well thought of Betting Line colt who followed him around the oval and didn’t gain an inch in the lane. He is from my good mare Lucy’s Pearl. She was more than a pleasure to own and had tremendous ability in her own right. She has a beaten time of 1:48.4 finishing second in an open pace at the Meadowlands. Talking about small horses, she weighed about 700 lbs. The colt is no giant either. To be perfectly honest, if she wasn’t a midget, I never would have owned her she would have remained at Brittany Farm for sure. Note: she is a sister to last year’s 2-year-old filly Breeders Crown winner Reflect With Me. I would love to see the colt have a great career.

Just as I predicted, as the horses fled the confines of the Florida borders so did DEXTER. It was reported to me that he was sighted in the vicinity of Vernon Downs and is rumored to be working with one of the locals. It has been said that his magic wand has already reaped some startling results and we have only just begun. Stay tuned.

While on the subject of beyond the law, I have been in contact or heard stories about contact with a variety of defense attorneys involved in the Southern District of New York indictments. I really can’t speculate as it’s not proper but my take is that some will walk and some will fry. It’s definitely not all cut and dry.

Tom Santoro asks: I just read Murray Brown’s column on Bret Pelling. Bob Glazer owner of Peter Pan stable disappeared from the harness racing scene. Was Bob Glazer a friend of David Copperfield or did he know Bret Pelling was doing something?

Please let’s stop more conspiracy theories. Don’t you realize a person can reach a point when either their mind or their body say enough? Until you spend a long time training horses at the highest level you could never comprehend the unbelievable stress factor.

Of course, it’s nice to spend your life out of doors instead of inside behind a desk, but that is just one plus. Go into the auction ring and buy a couple million dollars’ worth of yearlings, plus valuable homebreds and see how well you sleep at night.

Having raced garbage for most of my life, when I reached the big time my baby race thoughts always included, ‘Will I be able to spend another winter in Florida?’

You don’t just worry about performance, you have to worry about sickness and lameness, too. Imagine the Hambletonian is two weeks away and your horse has been the early favorite for the past 10 weeks and you go to jog him and he is lame. You suffer so much more internally than people imagine.

We have seen this picture many times. It happened with Per Eriksson, Jimmy Takter and now Brett Pelling.

Every individual deserves a degree of privacy. I know all three and I am happy to say that I am well aware of the reasons for their seemingly early departure from our sport and I assure you none of them had anything at all to do with wrong doing.

Billy Bigler asks: I noticed that hardly any 2-year-old trotters make breaks in their first start as exhibited at the Meadowlands last week. Years ago it was commonplace. Can you explain this phenomenon?

We are definitely breeding a far more athletic and more efficiently gaited horse today in comparison to the bulky, almost uncoordinated, horse of earlier times.

On top of that, they are being drilled on the straight track by Swedish trainers with barns full of stock and most likely have been faster in training miles than they went Saturday morning. Please take note of the results to understand the difference. Swedish trainers represented approximately 75 per cent of the entries. Not one of the non-Swedish trained horses finished in front of a Swedish trained one and the trailers were beaten by a combined 180 lengths.

Just some interesting numbers to show what we are facing from across the pond.

There were only five qualifiers, $3.5 million in combined auction prices of the Swedish contingent, plus, in my estimation, another $1 million in homebreds.

Face the fact Burke, Miller, Alagna and Cecere are the Great American Hopes and they simply don’t have the depth of quality.

I would be terribly remiss in my job if I didn’t applaud the Always B Miki youngsters for winning all three of the pacing races on the select card.

Thanks to Ray Schnittker for saving the day for American trainers with a win with his Miki colt that he co-owns with Dr. John Egloff whose Vieux Carre Farm was also the breeder.

Joel Kravet asks: How important is it to have the same driver behind your 2-year-old trotter week after week? It seems some trainers shuffle them often.

There is no question that having one driver is an extremely important ingredient in the success of a 2-year-old trotter.

That is why the big stables have such a huge edge. If Burke, Takter, Alagna or Melander have a top prospect, notice the driver remains the same 95 per cent of the time from the first baby race to the Breeders Crown. The trainers you talk about shuffling drivers do it out of necessity, not by choice.

You can really take note of this when early in the year the finals of the Peter Haughton and the Merrie Anabelle are raced with 10 horses. Unfortunately, there aren’t 10 top trotting reinsman. Take note of the trainers that are forced to use a less talented driver. For sure the name doesn’t appear above.

I was blessed with Michel Lachance, who for 15 years never picked off a stakes horse of mine. He did come close in the 1996 Hambletonian, but my sterling personality did prevail. You have no idea what a pain it is to have to contact the judges every morning to find out who the gods have selected to drive.

I consider myself very lucky because when Michel retired I had a small stable and found Yannick Gingras, Matt Kakaley and Corey Callahan very loyal to me. I truly thank them all.

Thank you all for the kind words. Please keep the questions coming in. I have put all the questions about the indictments on the back burner. I promise as soon as I have any information for you it will immediately in print. Wonderful weekend of racing with the 36 races at the Meadowlands that includes the beginning of the New Jersey Sires Stakes and will play host to Breakfast With The Babies on Saturday morning for the first time since the arrival of the virus. Have a wonderful week.