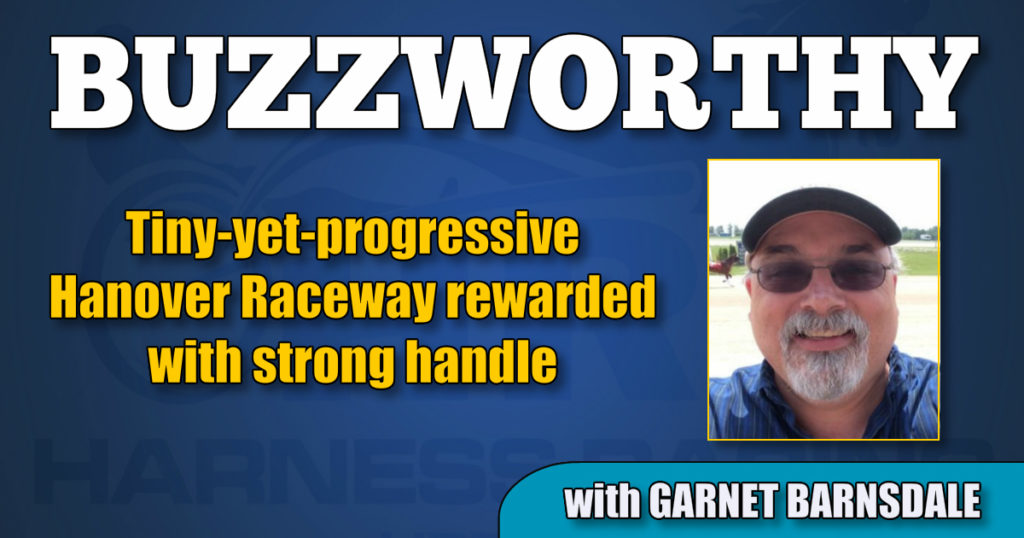 The small Ontario track has embraced an HD signal, a low-takeout Pick 4 and young tech savants Tony Elliott and Ryan Clements to help it start its 2020 season with a bang.

While the Woodbine Entertainment Group was getting some major buzz from Racing Night Live on TSN (full story here), they weren’t the only ones getting air time this past week. Hanover Raceway was generating some buzz of their own, and their efforts to improve their product showed at the windows.

On the surface, $67,000 in handle generated on their opening card last Saturday might not seem like much, but consider that last year with fans in attendance every Saturday night, Hanover averaged about $26,000 bet per card. Last Saturday (June 6) was the first card with no on-track wagering, and the $67,000 represented the track’s biggest handle day since 1991. They followed that up with another good wagering day yesterday, handling just over $65,000.

Hanover’s new management team brought a fresh approach and embraced every available useful form of technology they could find. Tony Elliott, in his maiden season as assistant to the new general manager Steve Fitzsimmons, explained some of the new features.

“In my job interview with Steve, I said there was two things that we needed to bring to the track: the first was a live HD feed shown on multiple platforms (including races shown live on Facebook) and the second was a low takeout Pick 4,” Elliott said. “We got both of those done now, so I’m pretty happy.”

Moving to a 2 p.m. post time, where they were the only harness track racing didn’t hurt, either, and they also attracted some star power. Leading Mohawk Park driver Doug McNair showed up to drive on both of the first two Saturdays at Hanover and his reasoning was simple. “I always liked going up there and I haven’t had the chance the past few years,” he said. “The 2 p.m. post time attracted me for sure.”

Hanover also partnered with Ryan Clements of Farm Games fame, who has brought serious innovation to the sport with his app-based Catch Driver and Off and Pacing games, as he is promoting the Pick 4 both at Hanover and Clinton Raceways.

“We’ve been developing a partnership with Hanover Raceway for a few years now and honestly, I just love small track, summer time racing,” Clements said. “There is nothing better than bringing the family, pulling out the lawn chairs and enjoying a day of racing under the sun. When my friend Steve Fitzsimmons was appointed as the general manager this year, I knew he’d be willing to think outside the box and bring improvements to the product in any way he could. This made our partnership a no-brainer, as we are always pushing the envelope and trying to push the sport that I love into the future.”

Elliott and Clements also teamed up to produce this document in Clements blog “The Bit” was released on Friday afternoon which detailed trainer and driver comments for the horses racing in the Pick 4 sequence.

“Ryan and I have talked about this for a long time, about how we’d like to promote a Pick 4 pool,” Elliott said. “We wanted to dive into it as deeply as we could and one of the thing we wanted to do was get driver and trainer comments from everybody. Anyone can read a program, but we thought these comments were very important — especially considering the layoff. Our goal was to have bettors provided with more information about this Pick 4 that any other Pick 4 in history.”

He used the analogy of sports bettors getting inundated with information to the point where they feel confident that they know everything there is to know about teams which then promotes wagering. “You need wagering to get wagering,” Elliott said. “We proved ourselves in week one with the $67K handle, so now we are adding the low takeout Pick 4 and we are going for the big boys.”

There aren’t many bigger in Ontario than Tommy “Hammer” Massis, recent winner of $1.17 million through HPI Bet on a Six Up wager on races from Hong Kong, and it certainly won’t hurt getting his endorsement. Massis and Clements teamed up on a Friday night podcast to talk about the Pick 4, which drew $2,940 in bets in its first go yesterday, which was close to 50 per cent over the $2,000 guarantee. “I’m in to support any track that understands that lowering takeout is good and promotes wagering,” Massis said. “If we don’t support it, why would any other track lower theirs?”

Ryan Willis, another local bettor who has been known to both bet and cash big, also threw his support behind the new bet for the same reason. “It’s nice to see new wagering options and initiatives priced well at the smaller tracks in Ontario,” he said. “I mainly bet these types of horizontal wagers and I really like it.”

It’s clear that Hanover Raceway’s management team — in cooperation with some local big players — are leaving no stone unturned in getting both eyes on their product and betting on their racing and it appears it’s a case of so far, so good this early in their 2020 season.