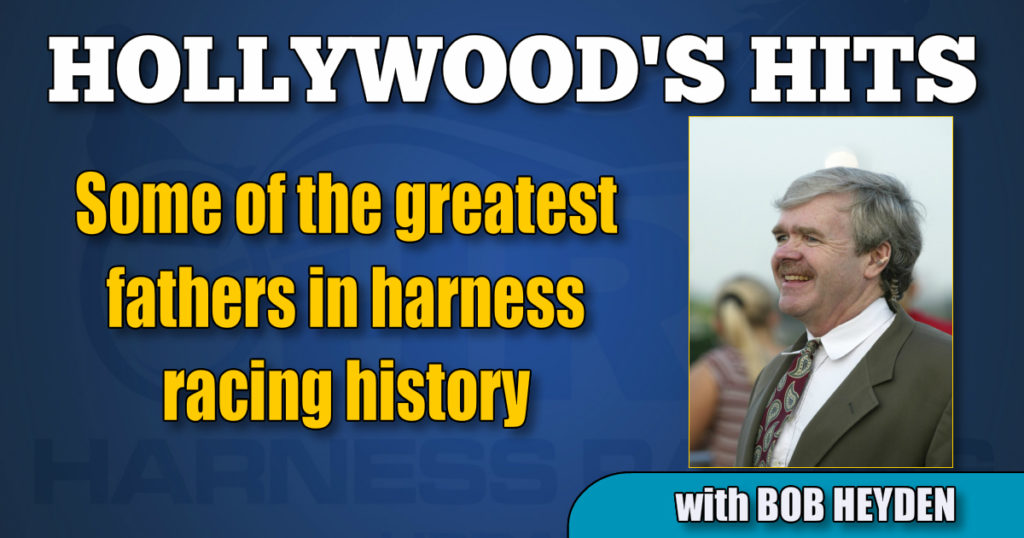 Some of the greatest fathers in harness racing history

In honor of Father’s Day, here’s a closer look at just some of the greatest standardbred fathers in harness racing history:

1. Stars Pride. Right off the bat we have three records that have not been bettered in the last half century — all by Stars Pride.

2. Cam Fella. He retired the winningest money winner in history among pacers with $2.041 million. From his first crop he sired Camtastic ($2,117,615) and from his last crop he produced Eternal Camnation ($3,748,574 — still the high water mark for female pacers 16 years after she retired). In between he became the only stallion to send out four straight Meadowlands Pace winners: 1991 — Precious Bunny (who like dad established an earnings record but his was for one season);1992 — Carlsbad Cam in Rod Allen’s one and only Pace appearance; 1993 — Presidential Ball and 1994 — Cams Card Shark.

3. Adios. Born Jan. 3, 1940 he lived until 1965. That quarter century brought seven world records on the track and a legendary career out of it.

Bought for $2,000 as a yearling and later resold for $21,000 to Del Miller, he was later sold again to Hanover Shoe Farms’ Lawrence Sheppard for $500,000 — or four times higher than any other horse to that point in history. Miller bought back a one-third share in the super stallion who had a bio that looked something like this:

No female pacers has won the Messenger or Cane Pace since 1960 when Adios’ daughter Countess Adios captured both.

Born one year before WWII started, his last son or daughter to win a race was 12-year-old Rocky Adios at Freehold in 1975 — a year before the Meadowlands opened its doors.

June 22 marks the 55th anniversary of his passing.

He banked $1,003,260 lifetime. He is currently sport’s leading sire of all time with progeny earnings just shy of $225 million, just a few dollars ahead of another fantastic sire that is due to pass him on the leaderboard: Bettors Delight. Camluck sired the Jug winner at age 25 when his son Michaels Power won it in 2012.

He had Meadowlands Pace-winning Dream Away from his first crop in 1997 of 3YOs, and he did something that year not since done: He was the leading winning pacing sire despite his oldest being only 3 — $8,917,716. His own sire, Abercrombie, was second that year and Abercrombie is second behind Artsplace on the all-time list, too. Artsplace currently ranks fourth all-time with total progeny earnings of more than $168 million and Abercrombie is fifth with more than $156 million.

Presidential Ball is still the richest single season horse of all time not to be named HOY ($2.222 million in 1993). Staying Together was HOY of the year for ‘93. Presidential Ball sired the sport’s second filly millionaires, Cathedra Dot Com, in 2001.

He began his siring career after 1992 and his first crop arrived the same time as Artsplace’s first crop. Western had a Triple Crown winner, Western Dreamer, from his very first offering. From 1999-2011, Western Hanover was either first or second every year on the pacing sire’s list and he currently ranks third all-time with total progeny earnings of more than $210 million.

Artsplace and Western passed away in consecutive years of 2006-2007. Yet, Artsplace’s Sportswriter (2009-2010) won the Metro and then the North America Cup and in 2009 guess who was Pacer Of The Year? Western Hanover’s Well Said.

Possibly nobody had a better view of brand name horses in the 1980s and ’90s like Bruce Riegle. Now 66, the son of Hall Of Famer Gene Riegle was the one who was teaching a lot of the early lessons to names such as Western Hanover, Artsplace, Life Sign, Troublemaker, Three Diamonds and later Western Ideal. Some just initially, some all the way through, but always with an eye on developing them correctly.

“We didn’t have contests with each other training them down,” Bruce said referring to his brother, Alan, and their father. “There was plenty of time for that later on. Putting a foundation on them was what mattered and that is what we did.

“Dad always wanted his horses on GO. If they were tired, we’d back off. He always had a good eye in picking out horses. George (Segal) believed in him and it worked well. We trained horses so they wouldn’t know where the end of the mile was.”

“When she baby raced, I would not have said world champion,” Bruce said “The first impression of her was Plain Jane. She was athletic — you couldn’t fault her there at all. She was very good early but not overly so. Early on in competitive racing, she was the best. I would just sit with her and move to the top and she was dominant (9-for-10 at 2 with one loss on a sloppy track). Everywhere she went, I did too.

“It was funny, I always liked Three Diamonds. Dad liked a filly named Obedient and my brother liked Rhythm Hanover.”

“She grew some from 2 to 3, but needed to dealing with the sophomore fillies. It can be a different story at 3. But she was her old self. She had a small patch of bad racing — and I remember the night it turned back around. The song Eye Of The Tiger was popular then, and it was playing. She had that look. Her eyes were flaming and she was ready to go. She never lost again and showed she was the world champion she was. As a broodmare, she had the outstanding Life Sign. She also had Threefold, who was a good one. Dad had three outstanding fillies who had great horses. You know how it goes with top race mares. Seldom do they ever have great ones. But Leah Almahurst had Western Ideal and Stienmas Place had Put On A Show.”

Worldly Woman was a good one, but not in the category of the others, Bruce said.

“No, and boy was she a tough filly to get going. She was with this inexperienced trainer early on — a big guy near 275 lbs— and she was nuts. She’d just as soon knock you down and charge at you. She liked women and took to my wife Diane. She’d eat grain out of her hand. But for the guys, one time it took five of us to hitch her and 40 feet later we were all on the ground. I believe that the cream always comes to the top. After a lot of trial and error, she came around and we were best buddies. I was the only one who drove her at 3. A big red filly who had ability.”

Bruce said Western Hanover was, “A super athletic colt. Smart. I’d step out onto the track to jog and he’d look both ways first then go. Whatever you had to do, no problem. I remember when dad was warming him up at Garden State Park for the Governor’s Cup (1991) and was buzzing him around with a :27 final quarter in the race bike for a 2:04 mile. Most would think this was too fast to warm up… but Western loved it and came back and jogged.

“He looked like a sports car. Greatest athlete. Quick speed. Dad was so excited about him early on… Art Zubrod at Brittany…told us to pick up this colt, Western Hanover. It seems he jumped the fence six feet high — twice. He knew where to go. Smart.”

Western Hanover raced for Gene Riegle at 2-3 and William Fahy did most of the driving on the super colt by No Nukes.

Bruce said Artsplace was, “Great gaited. He bumped a knee a little right front, but was a talented colt for sure. I remember the night he won at 2 in the Breeders Crown at Pompano Park. It was so windy they had to turn the infield fountain off because it was blowing all the water onto the track. He was so dominant. Dad wound up winning the Governor’s Cup three straight years (1990-1992). We had good success with the Abercrombies. Life Sign came two crops later. I wasn’t surprised to see how well he did on the track.”

Troublemaker, the first sophomore Breeders Crown winner in 1984, was, “Very nice right from the start,” Bruce said. “An athlete for sure. We wound up racing him a long time. Billy O’Donnell got along with him better than anyone. That happens. I’ve always felt that from the top of the stretch home, nobody has ever been better than Billy O’Donnell.”

Bruce said Western Ideal “At 2 was a big awkward colt who got a little better in each start. He had that bad injury nearly slicing a tendon at 2 and if we weren’t right there and if it hadn’t happened at Lexington I don’t think he would have made it. Rood & Riddle was there. Dad thought he would have loved The Red Mile, but it wound up okay for him because he needed the time to mature and his 3YO season he wouldn’t have been ready for the top colts. The injury healed well, and he came back fabulous. He filled out well.”

Western Ideal was called “My greatest sire of all” by Brittany’s George Segal. He had the 2005 HOY Rocknroll Hanover in his first crop, along with American Ideal and Cabrini Hanover — the three richest sophomores of 2005.

Bruce remembers Western Ideal’s dam, Leah Almahurst, as, “a daisy cutter. She was gaited a little different. Not a great filly, but had her moments.”

“He was a little bigger and stronger than the others,” Bruce said. “Not a typical Abercrombie. Quick but not real quick. First up was his game. Remember when he won the Jug first up — look at the horses he was doing it against: Presidential Ball and Riyadh. Momentum was his game. If he took a bad step or two somewhere in a race, it would take him a bit to recover and that would likely cost him the race. But once he got rolling watch out.”