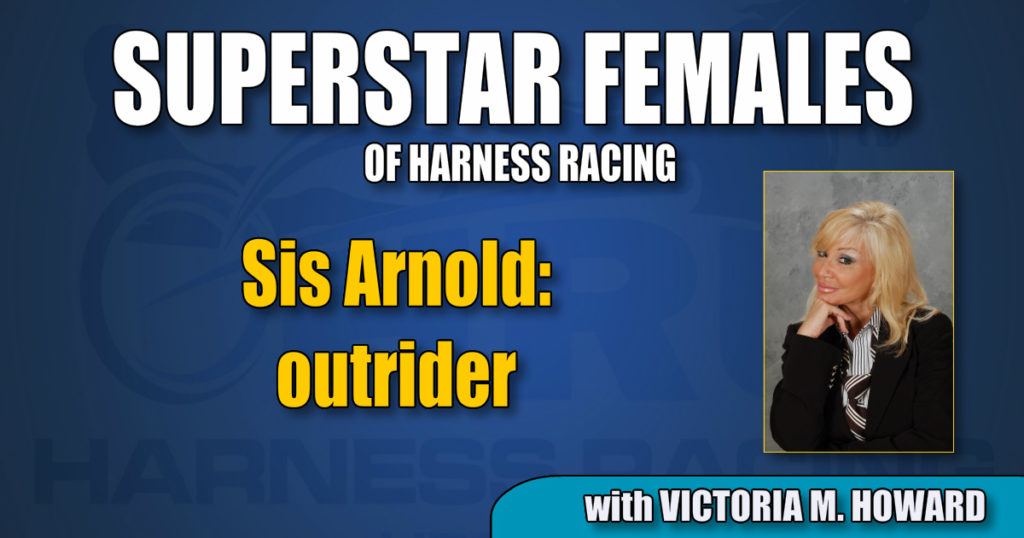 When it comes to Sis Arnold, the apple didn’t fall far from the tree. Her grandfather, horseman Floyd Arnold, got the ball rolling when he began training and driving standardbreds, mainly in Iowa. His son, Mike, (Sis’s father) followed his footsteps running a stable in Kentucky and Chicago. Her mother, Lois, owned and operated a tack shop at Louisville Downs. And the beat goes on.

Today, Sis is the outrider at Hoosier Park in Indiana.

What enticed this woman to become an outrider?

It started in 1991 when her father’s wife, Jill Arnold, needed help outriding at Sportsman’s Park. Sis filled in and that was the beginning of a happy, yet busy, life-long career. Since that day, Sis has graced the tracks of Balmoral Park, Maywood Park, Hawthorne, Arlington, Sportsman’s Park and presently Hoosier Park with her dauntless talent as one of the sport’s best outsiders.

“I love them all, but probably Maywood Park (is my favorite) because we had a little room inside the paddock where all the horsemen could hang out. We watched television, ate food there on Friday nights, and, of course, watched the races,” she said, laughing. “It was a great time.”

Sis not only outrides but also trains and has worked for some of the best in the business, such as Tony Morgan, Homer Hochstetler, Donna Lee, Jamie Macomber, Jeff Cullipher and Ken Rucker.

An outrider looks like a fun and easy job. You get paid for riding a beautiful horse, dressing up in appropriate attire and getting to watch all the races. But, in fact, it is difficult, nerve-wracking, and can be quite dangerous. These accomplished riders selflessly risk their life night after night, not only when the weather is sunny and warm, but in snow, sleet, rain, and bone-chilling temperatures.

“I remember one night at Balmoral Park when the lights went out and it was complete darkness. A horse broke stride in a race and four other horses crashed,” Sis said. “That was one of the worst nights in my career.

“Another time at Maywood Park a horse got loose and was running towards the horses racing. That was by far one of my scariest.”

There are certain horses that need the outrider’s assistance in post parade. I asked Sis why some do and some don’t.

“They are just like people. Human athletes get anxious before they perform — horses are the same way. They get nervous, have an adrenalin rush and become confused. Then there are those that just aren’t that smart. They’re no different than people,” Sis said, laughing.

An outrider is only as good as her horse. Sis has not one, not two, not three, but four talented sidekicks.

“My oldest is Black who I consider the best of the bunch. Second in charge is Brownie, then comes Boss, my big eater, and last but not least is Billy the newcomer, who is learning the ropes,” she said.

An outrider is a God-given talent and something that cannot be learned at school. It is usually self-taught by veteran outriders, as was the case with Sis.

“Jill Arnold, my step-mother, was my mentor, but before that I worked with thoroughbreds for about six years and learned a lot from old timers like Gene Ford.

“Gene was a tough old bird and the first to let me ride his pony horse. He was a great horseman who would take on all the bad acting horses.”

So if it’s not glamorous, you don’t get rich doing it, and can be hazardous, why does Sis do it?

“I do it because I like a challenge. I never know how or what is going to come out of that paddock, or how the race is going to go,” she said.

“Yes, you don’t make much money, but I enjoy breaking new horses — trying to make them into something.

“The races today are going so fast that anything can and does happen in a blink of the eye. Sadly, outriders don’t get the glory trainers and drivers do. In fact, nobody even knows there’s an outrider out there until something bad happens.

“An outrider can never let her/his guard down, even for a second. It’s all about when you are needed you have seconds to be a ‘hero or a zero.”

Outriders are the sport’s unsung heroes. They are very important and deserve recognition and praise. They are responsible for ensuring the safety of all horse racing participants (both human and equine) during training and racing, catching loose horses as quickly as possible, and assisting drivers who are having trouble with their difficult horses.

Here’s to Sis Arnold and all outriders. We thank you for your time, hard work and dedication.