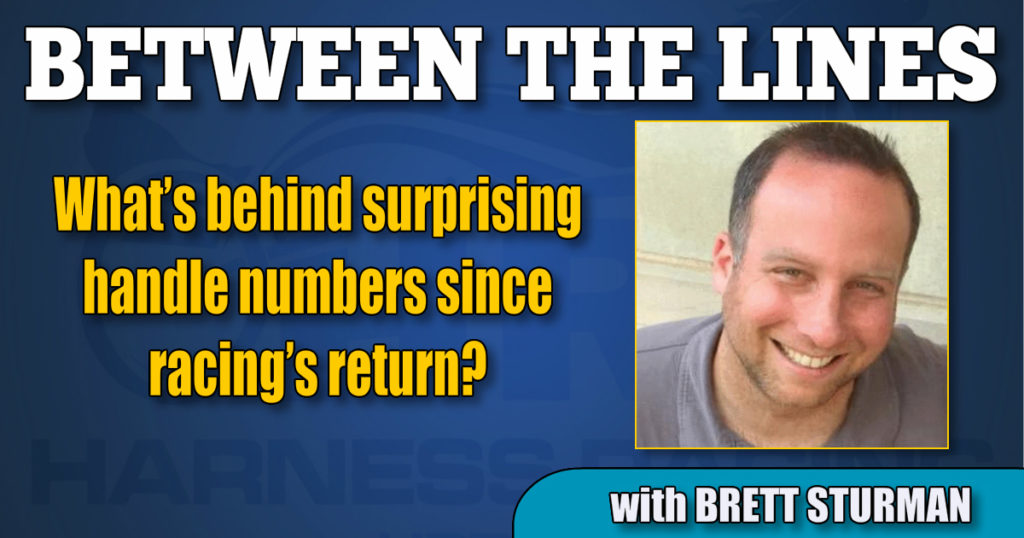 What’s behind the surprising handle numbers since racing’s return?

As harness tracks continue to come back online, most are overachieving in handle. With tiny Scioto Downs now added to Northfield Park as going over the $2 million handle mark in the past week, Hawthorne Racecourse, too, went over the milestone. Conversely, when the Meadowlands and Woodbine Mohawk returned last weekend, their handle, surprisingly, could be described as somewhat underwhelming.

What dynamics are at work that can reconcile the differences in relative handle between the tracks?

According to one professional horse bettor, what it comes down to is that the traditionally smaller tracks are more price appealing. It might be a topic that your average bettor doesn’t consciously think through, but it’s something of extreme importance to a small number of individuals who comprise a high dollar wagering volume.

Scioto Downs began their meet a couple weeks ago with a string of million-dollar handles. For a track that had historically averaged total handle of $225k a night, the increase was massive. During this time, the track had the harness racing world almost to itself and I don’t think anyone realistically thought that the track could still do $1 million once the Meadowlands and Woodbine came back. Amazingly, even with those premier tracks returning last Friday, Scioto Downs showed real staying power by still making it into seven figures.

The bettor I spoke to explained it.

“There’s just opportunity for everybody. Scioto started back before the Meadowlands and people were excited for harness racing, and so people obviously drifted to them because they were available but also saw that the product and the pools were okay. The thing is, once tracks gain pool size, it becomes a snowball. Once a track like Scioto gains a pool size that’s bet-able, the bigger bettors start betting and the smaller bettors get attracted to it also.

Last Friday, when Scioto stayed over $1 million, the Meadowlands returned with $2.8 million. Of course, that number still leads the way across harness racing as it always has, but it didn’t return with the same bang that other tracks did. In fact, the Saturday handle dropped slightly from Friday, coming in at $2.7 million. I’m sure that’s happened before, but I can’t recall off-hand an instance of Saturday handle being less than a Friday other than on maybe a night where all the top drivers are away for a big night elsewhere.

In offering his explanation for the Meadowlands numbers, this bettor was very direct.

“The Meadowlands let’s Monarch distribute their signal for them and then Monarch charges a high host fee,” he said. “Plus, they had a 2 per cent Monarch fee to rebate shops, which they get all of. None of it goes to the Meadowlands or horsemen. So, all the price-sensitive bettors – the bettors who bet the most money – won’t bet because their rebate is very low. Also, Monarch doesn’t give their signals to some ADWs and rebate shops. And the places they do give their signals to – they require that a customer must bet $1 million per year to get a rebate and have access to their products, which obviously includes the Meadowlands.”

Doing some basic math, he describes takeout for rebate bettors as essentially being equal to host fees plus distribution fees plus fees from the ADW. What it comes down to is that due to the higher variance in host and distribution fees between let’s say the Meadowlands and Hawthorne, a bettor could be paying twice as much in takeout fees to the Meadowlands than it is to Hawthorne. In a specific example from a couple years ago, he cites a mandatory payout on a Jackpot Hi-5 from the Meadowlands and Hawthorne. That night with a $50k less carryover to work with, Hawthorne got $1.4 million in new money compared to $260k at the Meadowlands. He says that anyone who bets on a large-scale basis knows this, and that’s why the smaller tracks are seeing far more gain relative to the bigger tracks.

As another example of surprising handle from earlier this week, Northfield Park outhandled Woodbine. That seems like something that would have been unheard of not too long ago.

“It’s the exact same thing,” said the bettor. “Northfield has a decent host fee for the price sensitive players, and they’ve always had that. It’s why they’ve always had some decent handle. When you’re trying to get growth in a betting market and in your pools, you have to make it lucrative for all sections of your customers. Price sensitive, regular people, and that’s what Woodbine – they kill off their regular bettors with 27 per cent takeout and stuff like that. So, when you kill off your regular bettors your pools diminish, and then your big bettors can’t play.

“You have a ton of customers on all different level that you need to appeal to and that’s what these bigger tracks don’t understand. You can’t kill your bettors and ever expect to have any growth is what it comes down to.

“If you want to bet the bigger tracks and fire away and get no rebate or a small rebate compared to the other tracks then go right ahead, but unless you’re a miracle worker you’re just not going to win. And if you’re not winning, you can’t increase handle unless you keep pulling money out of your pockets. And not only that, but if you’re losing, you’re going to lose faster.”

Speaking from direct experience he said, “Nearly 15 years ago I bet $2 million a year at the Meadowlands and that’s when their host fees were low, and the product was good. And as the product started deteriorating, they started raising their host fees and now I bet zero at the Meadowlands. They race on nights where there are tracks racing with better opportunities for me.”

The irony is that in the opinion of this individual, the historically premier tracks are the ones making it least friendly for bettors such as himself to play. At the same time, the smaller tracks that had been overlooked prior are starting to make real gains and have been successful of late in attracting new customers, both small and large.