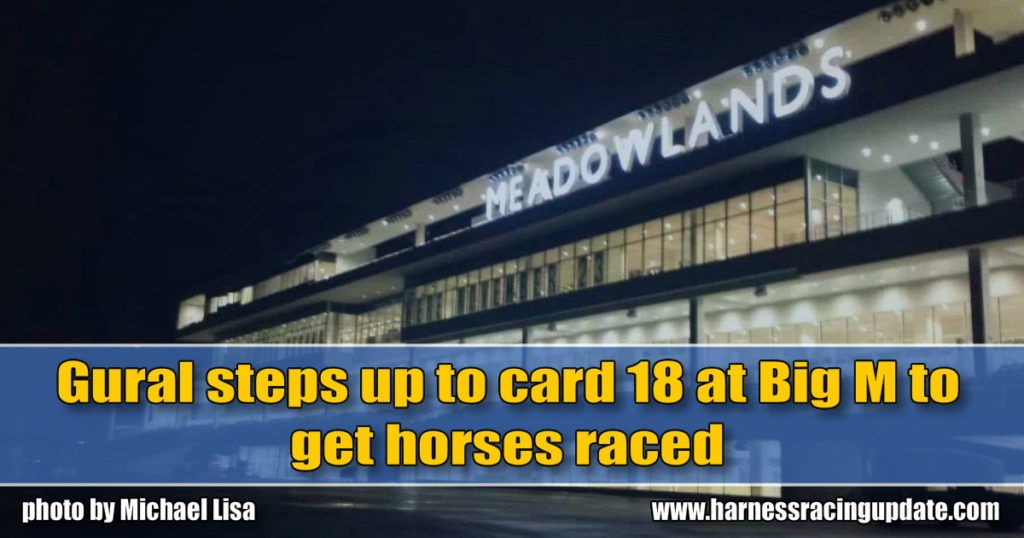 After failing to get approval to add a third day to the Meadowlands’ weekly schedule, track owner Jeff Gural opted to card 18 races a night beginning next week after 777 horses were dropped into the entry box.

Mark Ford said horsepeople owe Meadowlands Racetrack owner Jeff Gural a huge debt of gratitude for creating 18-race cards at the New Jersey track in an effort to get horses raced following a three-month shutdown due to COVID-19.

Ford, the president of the Standardbred Breeders and Owners Association of New Jersey (SBOANJ), said Gural first tried to add a third weekly race card at the Meadowlands, but was turned down by the New Jersey Racing Commission (NJRC). That’s when Gural opted to temporarily increase both weekly cards to 18 races each beginning next week with the June 19 card. It’s all in response to having 777 horses entered to race at the Meadowlands this weekend as Pennsylvania tracks have yet to resume live racing and Yonkers Raceway in New York is also still on shutdown. Currently, the Meadowlands has 13-race cards, meaning 500 of the horses entered this week were shutout.

Michael Lisa | Starting June 19, The Meadowlands will temporarily increase to 18-race cards starting with a 6 p.m. first post in an effort to get more horses raced after the three-month COVID-19 shutdown.

Ford said his association hasn’t always agreed with Gural, but he said in this case Gural has tried to find a solution to get horses raced and money flowing to horsepeople struggling without racing income.

“I have to give him credit here, he’s really stepped up,” Ford said. “He doesn’t get a lot of credit for a lot of things, but in this situation he’s taking a bit of a hit and he’s doing the right thing for the horsepeople and we appreciate it.

Jason Settlemoir, the chief operating officer and general manager of The Meadowlands, said the number of horses entered spurred Gural to act to try to get more horses raced.

“(Former race secretary) Pete Koch used to open the (entry) box at this time of year and there would be 50 horses, so when you open the box and there’s 777 horses it’s kind of mind-blowing,” Settlemoir said.

“We realized that there was obviously a situation and we wanted to try to add race dates, but that would take a meeting of the commissioners in New Jersey. So, after speaking to the executive director, we decided, rather than to wait on the monthly meeting, which is a few weeks away, we decided to move the post-time up to 6 o’clock and add races on the end, so we could try to get as many horses raced as possible.

“Jeff is always thinking outside of the box. It was one of those things where we’re happy to try to help the industry as much as possible. We’re obviously trying to help people get back to normal again.”

That said, Ford and Settlemoir agree 18-race cards are not ideal.

“But it’s a lot better than nothing,” Ford said.

A Meadowlands press release said, “To stay close at all to the budgeted purse account will require a 20 per cent reduction excluding the planned three 12-horse races per night which will see 10 per cent trimmed from their purse. Purses will return to previous levels upon returning to the normal number of races.”

Settlemoir said there will likely be less time between races to get through the long cards.

“That’s something we’re going to have to coordinate with WEG. Obviously, we want to stay away from them and we want them away from us, so we’ll coordinate with the guys that set the post-times up there, so we make sure that we’re off of each other,” Settlemoir said.

Those technical issues and some very long days for Meadowlands staff — which will start in the morning for qualifiers and be there late into the night — pale in comparison to the strife facing many horsepeople.

“People are (upset) because they are hungry,” Ford said. “Nobody knows what’s going to happen and it’s a very scary time… There’s an obstacle around every corner. I’d really like to give credit to (SBOANJ executive administrator) Al Ochsner and the staff of the SBOA that are fielding calls and hearing the plight of the horsepeople.”