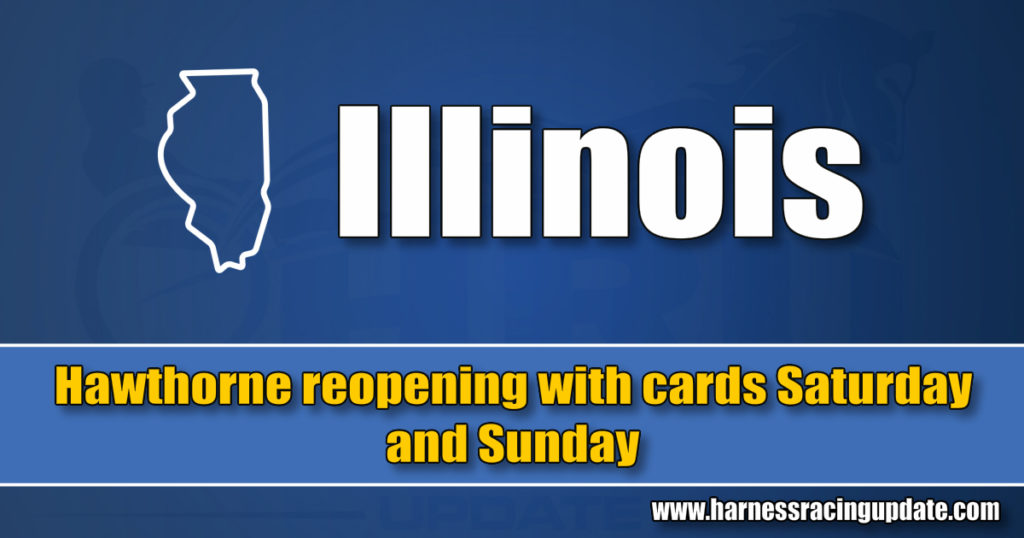 A torrent of 450 horses flooded the entry box Wednesday in preparation for the resumption of racing on Saturday and Sunday nights at Hawthorne Race Course in Chicago.

The longest meeting in the track’s 50-year history of harness racing began on Feb. 15, but the meeting scheduled to continue through Sept. 20 was halted after 12 programs on March 15 because of the COVID-19 pandemic emergency.

A total of 33 racing nights were lost.

In reopening, racing secretary Robin Schadt has scheduled 13 races for both Saturday and Sunday.

Spectators will be conspicuous by their absence.

According to Jim Miller, the track’s director of publicity and horsemen’s relations, no spectators will be the norm until Illinois Gov. J.B. Pritzger decides otherwise.

“We’ll have racing two nights this weekend and then next week we will go back to our traditional (Friday, Saturday and Sunday) schedule,” Miller said.

The races will be shown on TVG and simulcast to the state’s off-track betting parlors and to the usual out-of-state wagering outlets.

“We want people to wager through our Club Hawthorne app because that provides the most purse money for horsemen,” Miller said. “All replays will be posted for free on our website. Since last weekend we’ve also been offering ‘Bet-and-Go’ services at the track and some suburban off-track locations. You can go up and place your wager and then head out. And OTB locations that have restaurants can provide outdoor seating.

“For Hawthorne, it may be nothing more than a break-even. The reason we’re doing it is for the horsemen. We’re doing everything we can for them after they’ve had to sit out for 2 ½ months. We’re trying to keep the industry alive because we know there are big things ahead.”

The “big things ahead” Miller was referring to is the planned opening of a casino at the racetrack that was made possible by legislation last spring and is expected to provide a bountiful new source of money for purses.

If spectators had been permitted this weekend, crowds undoubtedly would have been sparse because of COVID-19 fears compounded by an outbreak of violence that began on Sunday and Monday in Cicero, the Chicago suburb located a block away from Hawthorne in Stickney. Two men were shot dead, stores were vandalized and 60 people were arrested as looters clashed with police officers and residents with clubs and guns.

About 30 peaceful protesters who stood outside Cicero Town Hall to express their indignation over the killing of George Floyd by Minneapolis police also were targeted by some of the resident vigilantes.

The episodes took place a few miles from Hawthorne where horses have continued to be stabled on the backstretch and train during the 2 1/2 –month racing hiatus but preparations for reopening weren’t affected.

After the resumption of racing was announced, qualifiers galore were held at both Hawthorne and the State Fairgrounds in Springfield. Hawthorne had 22 qualifiers on Monday and seven on Wednesday.

At Springfield on Tuesday 17 non-betting Spring Preview races and six qualifiers were held.

Schadt said the preliminary races leading up to Hawthorne’s main event, the Night of Champions consisting of 11 stakes for Illinois-breds on the final Saturday of the meeting haven’t been disrupted.

“They were supposed to begin in May and now we’ll fit them in the June schedule,” she explained.

Hawthorne’s studio racing protocols have been developed in accordance with minimum guidelines issued by the Department of Agriculture and approved by the state and county health departments and the village of Stickney.

Track officials anticipate that no more than 25 additional people will be required to be at the track when it transitions to racing.

The extensive restrictions are so stringent that horse owners will not be allowed on the racetrack unless they are approved licensed caretakers.

Included among the protocols are:

Mandatory temperature checks and facial coverings for all stable area workers and residents;

Pre-race paddocks in open-air barns with additional spacing between stalls;

Plexiglass protection to separate individuals whenever social distancing is not ensured;

Nightly spray disinfecting of the paddock and ship-in barns.

Tony Somone, executive director of the Illinois Harness Horsemen’s Association (IHHA), doesn’t envision any problems in adhering to the regulations.

“Horsemen are very resilient by nature,” he said. “This comes just in time for our members. On average it costs $1,500 per month to take care of a horse whether it’s racing and earning money or not. More than half of the trainers who will be racing at Hawthorne have between five and 10 horses and we haven’t be racing for nearly three months. Some have between 10 and 20. A few have more than 20.”

Hawthorne president Tim Carey expressed his thanks to Governor Pritzger and the Illinois Department of Agriculture “for working with us to create a solution that recognizes the unique needs and challenges of horse racing.

“There are hundreds of small businesses across the state that rely on racing at Hawthorne.

“This will be a boost for the Illinois economy that will not impede efforts to flatten the curve of the spread of COVID-19.”

The cessation of racing on March 15 didn’t halt the preparations to convert Hawthorne into a racino.

“We’ve kept on as many of our staff as we could and they’ve been able to do a lot of internal work,” Miller said. “When you talk about a building that’s 40-years-old (after being rebuilt following a 1978 fire that destroyed the grandstand) there are a lot of wires, fixtures, ceiling titles and that kind of stuff that needs to be done before we get into the construction part. We’ve been able to do that.

“We’ve completed everything with regard to paperwork and interviews so when the Gaming Board meets in June we believe we’ll be issued a license. Once that license is issued construction can begin very quickly and very easily.

“The hope is we’re only a year to 16 months away from being able to reopen.”

The standardbreds and thoroughbreds have been time-sharing at Hawthorne since the state’s oldest track introduced harness racing in 1970 and from 2003 through 2019 there was a spring thoroughbred meeting. But this year, with the support of the Illinois Thoroughbred Horsemen’s Association, that meeting wasn’t held to put the racino conversion project on the fast track and have Hawthorne be casino ready in time for the fall thoroughbred meeting.

Although the meeting remains the longest in Hawthorne history calendar wise, the loss of the live racing dates and the revenue they would have produced to fund the project has delayed the long-awaited start of casino wagering until next year.

Hawthorne also runs the pari-mutuel State Fair meetings at Springfield and DuQuoin for the Department of Agriculture.

According to Tim Norman, the department’s Bureau Chief for horse racing and county fairs, the meetings at Springfield on Aug. 14, 15, 19 and 20 and DuQuoin on Aug. 28 and 29 will be held as scheduled but they too are expected to be conducted under a studio racing format.

“These will be non-betting races and there will be no spectators. I’m working with Jim Miller to see if we can get some equipment from Hawthorne so we can simulcast.”

Somone praised Norman’s concept. “This is a terrific way to get money into the pockets of horsemen,” the IHHA’s executive director said.