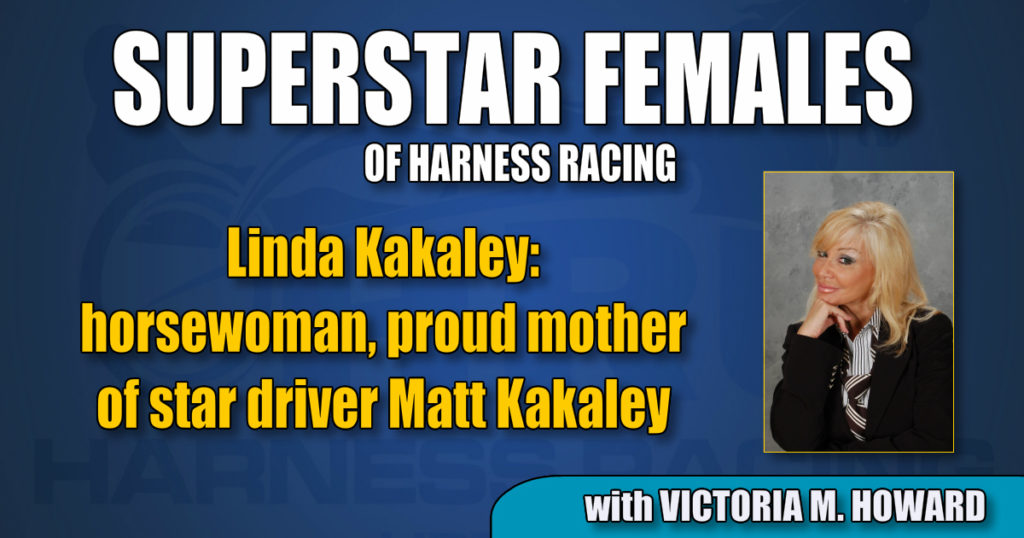 Whenever the telephone rings late at night, it is every parent’s nightmare that perhaps her child has been involved in a car wreck or something worse.

If your son or daughter drives harness horses and that call comes, the unknown can be intolerable.

Unfortunately, longtime horsewoman Linda Kakaley received that call one evening inquiring if her son Matt was okay. Linda hadn’t heard that Matt had been in an accident, so she immediately called her daughter-in-law, Annie.

“We discovered there had been a terrible race accident at Yonkers Raceway and Matt got hurt and was taken to the hospital. Annie and I immediately left for New York, praying the whole time he was okay,” Linda said.

“The outpouring of prayers and support from friends and family was tremendous, helping us get through that time. Prayers worked and the good Lord healed Matt, getting him back doing what he loves to do: driving horses.

“If anyone has been through anything like this they know the sick helpless feeling you feel.

“When I walked into the hospital, Matt was getting stitches in his face. That was hard enough, but when he yelled out to me – ‘Mom, I think I’m blind,’ my heart shattered.”

Thankfully, Matt did not go blind, he made a complete recovery, and today is one of harness racing’s top drivers.

Linda’s 40-year journey began in April 1980 when she attended Northville Downs Racetrack with friends to watch the horse races.

“In the post parade was this beautiful horse named Running Wild. I looked at him and — boom — it was over… I was in love with harness racing and the horses, and decades later that hasn’t changed.

“I discovered my dad’s cousin, Norm Pertunen, was a local trainer and began spending weekends working in his barn. That November, I quit my job running a small sales office in Detroit and started grooming for trainer Joe Gatteri.

“Three years later, I met John Kakaley — the man I would marry — when he was working for his brother, Mike. With my encouragement and persistence, John began driving and training standardbreds. Two year later, in 1985, we got married and started our own stable.

“During my husband’s career, John drove a lot of crazy, bad-gaited horses, thus he was involved in several accidents. I learned early on not to let myself worry when he sat behind a horse — or at least I put up a good front.

“Marrying John was my first good fortune, but the biggest blessing in life came in 1988 with the birth of my only child, Matt. Matt was a happy kid who loved his family, animals and sports. He was a very good student who was always at the top of his class. Of course, I was a proud mother.

“After school he would get off the bus at the farm and help me finish the day’s work — feeding the broodmares and his pony he adored.”

Linda has owned many nice horses, but the one she enjoyed most was a trotter she trained and co-owned named Whosgoinwhosstayin.

“Whosgoinwhosstayin was very special to us, winning all his stake races in Florida at 2 and 3. It was so exciting to watch him and our most memorable times in the business were with him,” Linda said.

Currently, the Kakaleys have three horses in training.

“I can’t imagine not having horses to take care of. I love them all. Everyone says not to fall in love with the horses, but I wouldn’t want to race if I couldn’t love them.

“Especially when the sour, mean horses nicker or nudge you, letting you know they love you back. That feeling is pure joy.”

When talking about her son, Matt, Linda beams with joy.

Raised to be a responsible hard worker paid off for the young Kakaley. When Matt turned 19, he relocated to Ohio and got a job working for the sports #1 trainer, Ron Burke, which was the beginning of a lucrative and long-lasting career.

“I was so proud and happy for him, but missed him terribly. I guess you could say I experienced ‘the empty nest’ syndrome, since he was my only child.

“They say you have to let your children go and spread their wings, but you never, ever, quit worrying about them.

“After the birth of Matt’s daughter, Arianna, he wanted his father and I to live closer so we moved to Pennsylvania.”

Being in the business for decades, the Kakaleys have been through the good and bad times and have seen many changes take place.

“I always enjoyed watching the races in the grandstands and getting to know the fans. I believe due to the fact the tracks and casinos make it an unpleasant atmosphere, has cost the sport many fans.

“We need to make it more enjoyable for people so they can come back to watching live racing. I mean, why would a bettor leave the comfort of his home and online betting to come to the track to watch the races when there is no good food, drinks, or service being offered?

“Casinos give free or reduced drinks to their customers, yet the racetrack patrons have to pay more, and clubhouse dining is rare today.

“I remember dining on the 6th floor at Pompano Park — the Winter Capital of Harness Racing — back in the good ole days. It was so exciting and thrilling. You never knew whom you might see there, such as George Steinbrenner, Pete Rose and Jackie Gleason, to name a few.

“Everyone dressed to the nines and the ambiance was incomparable.

“I know fans love meeting the drivers and trainers for many have come up to me and say how nice it would be to meet one; so why don’t we make that a priority?

“Our racing family is comprised of really good people. They are big-hearted, caring, and have helped me through many difficult times so I’d like to thank all of them. Even through these unknown, scary times I have faith that together we will get our sport back to where it rightfully belongs.”