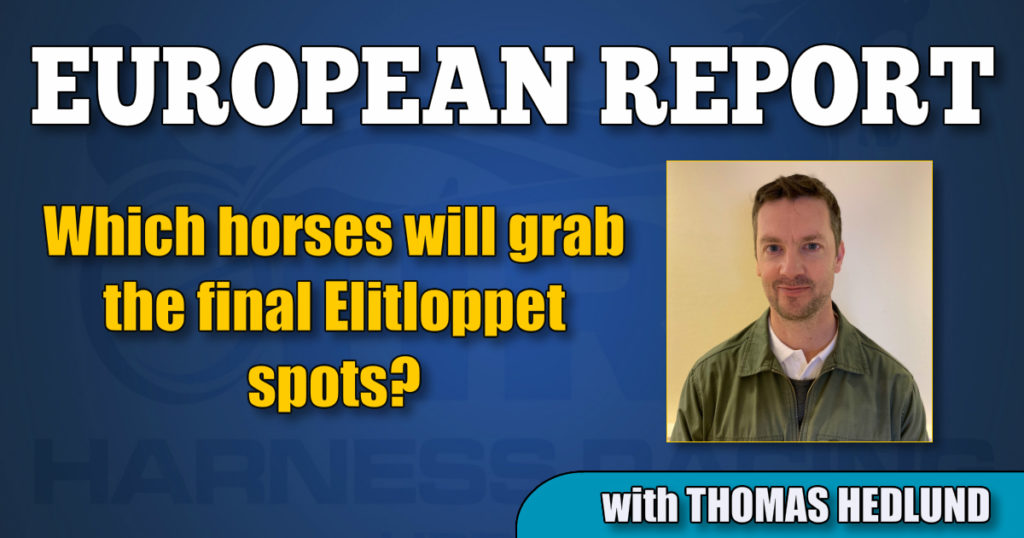 Which horses will grab the final Elitloppet spots?

The Elitloppet at Solvalla is approaching. Sunday, May 31 is the day when 16 high quality trotters from, normally, all over the world, will chase eternal glory and a winning prize of $311,000.

This is a special year, for known reasons and discussions among harness racing fans mean that this year’s edition of Elitloppet is the worst in many years. By worst they surely mean the quality of trotters that already have been invited – or qualified – for the big race at Solvalla.

But it’s an unfair to say the Elitloppet lacks a great class this year. Under the circumstances, it’s pretty hard to find better horses that are ready for the two-heat mile race in Stockholm a week from Sunday and there has also been a couple of qualification races where all good horses have had their chances to reach a spot in Elitloppet.

The following horses are currently invited and ready for Elitloppet 2020:

By all means, there are horses that are missing if one chases the very best trotters from the world. But at this very moment, there are not many other horses that can replace the ones that already have their invitation for the race. French trotters such as Bold Eagle and Cleangame would be attractions at Solvalla, but they both met Earl Simon in Caen last week and none of them impressed more than the winner from Jarmo Niskanen’s stable. So Earl Simon must be considered the most interesting French trotter over the mile at this point.

Italian trotter Vivid Wise As won the Criterium de Vitesse in Cagnes-sur-Mer earlier this spring and has earned his place in Elitloppet. An uncertain performance in the last race in Sweden makes him a little bit more hard to count on at Solvalla next week, but two weeks ago, the son of Yankee Glide was the first choice to win Elitloppet at many betting companies in Europe.

Five spots remain before the field is set and there are several trotters that are knocking on the entry door of Elitloppet.

Peter Untersteiner’s Heart Of Steel (Cantab Hall) had a great performance in $73,500 Copenhagen Cup in Denmark last Sunday. Despite a trip outside of heavy favorite and world champion trotter Zacon Gio, Heart Of Steel fought bravely and held quick finisher Milligan’s School behind him by a neck.

Heart Of Steel is one of the more interesting horses that Solvalla’s sports manager Anders Malmrot has in mind when he will get the Elitloppet field together.

Milligan’s School’s runner up performance in Denmark puts him in a spot where he must be one of the hottest alternatives, but Stefan Melander also has another well merited sprinter in Courant Stable’s Disco Volante. And what about Green Manalishi?

The winner of the $62,300 Gold final in Gävle Saturday will receive an invitation for the Elitloppet and it’s an exciting field of 10 horses that will try to claim their spots at Solvalla, respectively. One, maybe two horses, will be set for Elitloppet after that race on Saturday afternoon and after that, three or four other horses will complete the field for Solvalla’s biggest race for the year.

Propulsion is not mentioned, yet. The American bred 9-year-old trains with the Elitloppet as the main objective, but so far, trainer Daniel Redén hasn’t given the thumb-up whether he will race the Muscle Hill son for the fifth consecutive year.

Milliondollarrhyme is another horse that knocks on the door for Elitloppet 2020. His merits so far this year are by far not enough to take him for granted at Solvalla next weekend, but his progress last year among the best trotters in Europe in addition to his high level capacity makes him a horse that ought to be guaranteed among the 16.

Horses that race in Gävle Saturday afternoon (winner gets an invitation to Elitloppet): One mile

Nine-year-old Billie de Montfort, with 105 lifetime starts and $2,324,297 in her bank account, is by far the most merited horse in the race and she could very well be invited to Elitloppet even if she doesn’t win this particular race on Saturday. Trainer Sébastien Guarato has another, more interesting trotter in his barn and it’s not a wild guess that his Prix d’Amérique winner Face Time Bourbon will be aimed for Elitloppet 2021.

The winner in Gävle (see horses above)

If someone outside this list grabs a spot in Elitloppet, it would be a big upset and the last invitations will take place on Saturday night, after the race in Gävle. Draws for the two heats in the Elitloppet come to pass on Sunday afternoon, so within 23 hours, the last five horses must be invited.

Helgafell — a winner in France

Vincennes in Paris raced on May 19 and 3-year-old dominant Helgafell (Charly du Noyer) was back as a winner. Philippe Allaire trains the promising 3-year-old and Eric Raffin sent the son of Charly du Noyer to the front at an early stage in $93,200 Prix Kalmia and the duo won easily in mile rate 1:58.4 over 1.6 miles.

Helgafell has dominated the French ”H-crop” both as a 2-year-old and this year and Philippe Allaire’s trotter has seven wins in ten starts in his career so far.

But harness racing in Paris closed again after the race card on Tuesday afternoon. Paris and the region around the French capital is considered as a red zone, which means that all sorts of horse racing had to be cancelled on Wednesday and indefinitely. Vincennes, Enghien, plus racetracks in Lyon and Vichy have to cancel all their race cards. There is a possibility that some events can be moved to tracks in Normandie instead, but no decision has been announced regarding that matter, yet.