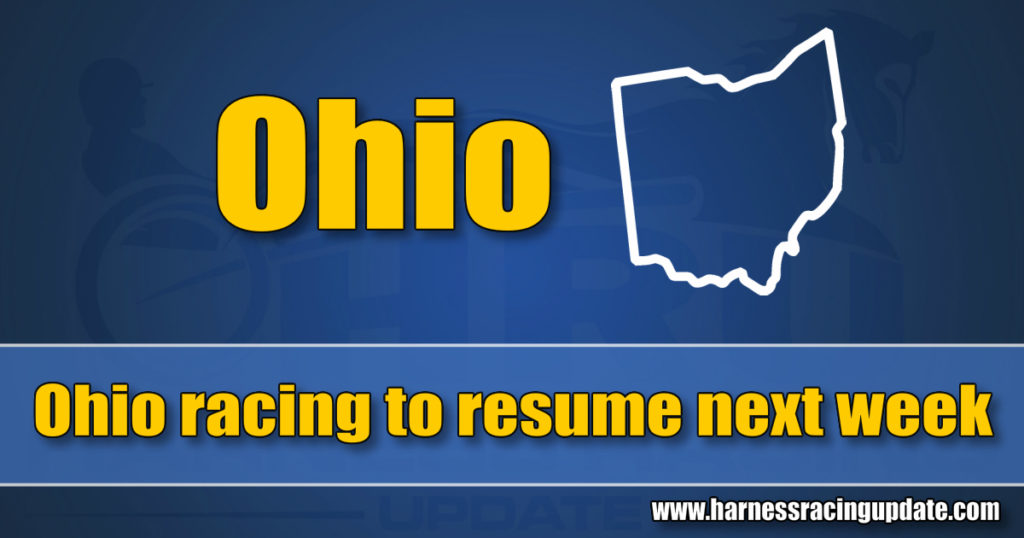 Ohio racing to resume next week

Despite several conference calls — the new normal in the COVID-19 era — being plagued by comical technical problems, the news delivered was well received by the harness racing community.

Don’t be surprised if the United States Trotting Association is soon overwhelmed with requests by horse owners, those with a keen sense of humor, to reserve what would seem to be an odd name for a race horse – Pleasemuteyourphone.

There is good reason to desire such a moniker. While what unfolded Wednesday and Thursday in the Buckeye State will be viewed by some as funny and as painful by others, those who dialed into three tele-conference calls organized by the Ohio State Racing Commission (OSRC) will not soon forget the experience.

The goal of the calls was to pass a resolution to clear the way for both standardbred and thoroughbred racing to resume at the state’s seven tracks after being sidelined by COVID-19 since mid-March.

But the effort was plagued by a cacophony of noise that resulted in repeated pleas by OSRC chairman Scott Borgemenke and his staff for those on the line to “please mute your phone.”

Instead, participants got to hear somebody snoring, several tweeting birds, a woman scolding a child (hopefully her own), those on a morning walk into a stiff breeze, even a guy tuned in from his car who shared his belief that nobody could hear him talking to a fellow motorist, even though most people on the call could hear him.

The three calls, jammed into 25 hours (the last one included a video conference for officials) did result in the unanimous adoption of a resolution that allows racing to resume in Ohio, without fans, as early as May 22.

“We are planning to start May 22,” said Joe Morris, the vice-president of racing operations at Scioto Downs.

“We’re scheduling qualifiers for May 18 and will start racing on May 26,” said Brent Reitz, Northfield Park’s vice-president and general manager.

When pari-mutuel racing commences, it will be under the OSRC’s “Protocols for a Safe Return Without Spectators,” pages of do’s and don’ts for cleanliness and social distancing.

Renee Mancino, executive director of the Ohio Harness Horsemen’s Association, didn’t mince her words when speaking to her membership.

“My message to our horsemen is that we got you to the gate, now you are responsible to win the race for us. If we get shutdown, it’s because you didn’t comply.”

While Ohio harness racing is preparing to reintroduce itself to fans and bettors on-line or on television, it was a two-day roller coaster ride to get in position to do so.
Wednesday morning’s teleconference was delayed because the OSRC couldn’t find a way to mute the dozens of people on the call, including someone who can apparently sleep anywhere, anytime.
“Somebody is snoring,” said Borgemenke. “We need that phone muted.”
Then, after a woman, perhaps sheltering at home with little ones, yelled for obedience, Borgemenke picked up another sound that didn’t belong on the call. “Those birds sound beautiful, but please mute your phone,” he said.
The constant beeping and bonking of new callers coming on line, proved too much for Borgemenke. He recessed the meeting until 7 p.m. Wednesday night with hopes of a more orderly call.
The evening session was as problematic as the morning one. Borgemenke plowed forward with little success.
“I apologize,” he said. “This is immensely frustrating.”
When the noise level increased, Borgemenke countered with, “I will stop this meeting. Please mute your phone,” and with, “Guys, I will sit here all night.”
But he didn’t. When an attempt to mute all those on the line except the chairman resulted in total silence, except for a voice saying, “Jesus, c‘mon” and “God, is everybody back on?” the call was again aborted.
One track official who requested his name be withheld, told a staff member, “When is the pain going to stop?”
It stopped Thursday morning when, after a test run, the conference call worked.
“Let’s move as quickly as we can,” asked Borgemenke.
After the resolution passed, a motion to adjourn was put forth, but not without a final hiccup. Commissioner William Patmon, Jr. struggled to unmute his computer microphone so he could vote.
“Give me a thumbs up, Bill,” suggested Borgemenke. “Yes. It’s unanimous.”