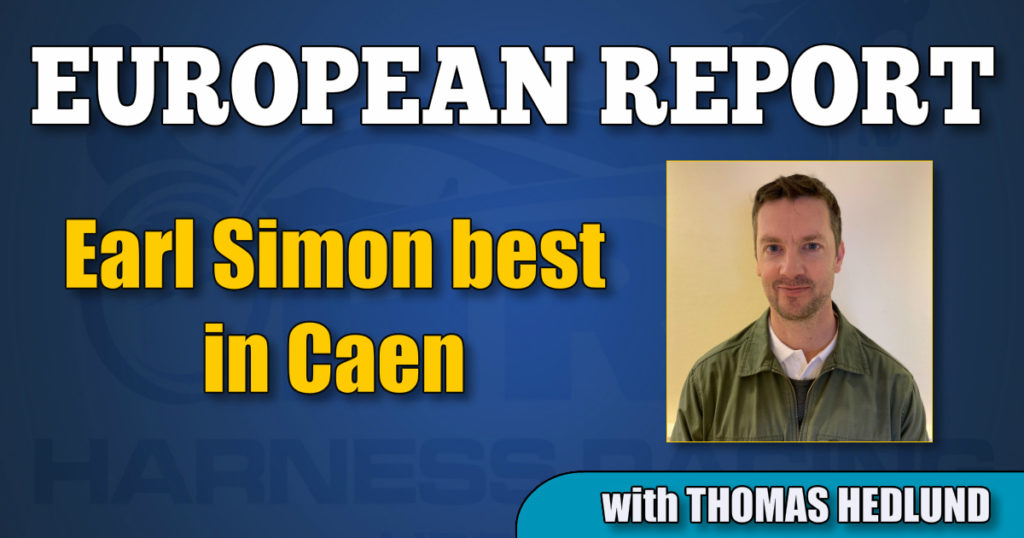 French harness racing opened its gates on Monday (May 11) after two months of lockdown due to COVID-19 and on Wednesday afternoon, several top trotters were gathered around the big track of Caen, where the $120,000 Prix des Ducs de Normandie was held.

Over 2.450 meters, approximately 1.5 miles, horses such as Cleangame, Bold Eagle and Delia du Pommereux tried to claim the win in the prestigious race, but it was another new French star that stole the show. Jarmo Niskanen’s Earl Simon (Prodigious) finished second to Vivid Wise As in Criterium de Vitesse in Cagnes-sur-Mer in March and has showed great capacity among tough contenders in Paris throughout his whole career. When driver Franck Ouvrie drove a perfect race with the 6-year-old and when Earl Simon pushed his bank account to some $927,000, the Elitloppet and Solvalla showed interest and invited the horse for the big mile race on May 31.

Earl Simon sprinted to superior win in mile rate 1:54.1 over the heavy distance and the French-bred stallion became horse 11 to be invited to Elitloppet this year.

On Wednesday night, Solvalla arranged two races where the winners were receiving a ticket to Elitloppet. The $20,500 Meadow Road’s race over 1.640 meters resulted in two races instead of one since the interest was great from trainers with elite horses.

Svante Båth’s Attraversiamo (Kiss Francais) was already given a spot in Elitloppet, but the horse’s entourage wanted to test the 5-year-old over the mile and when Erik Adielsson served the Swedish Derby winner a perfect second over trip, Attraversiamo was hard to beat and he came home in 1:53.2.

Sorbet (Super Photo Kosmos) noted the same winner time in the second heat of Meadow Road’s race. Daniel Redén’s 9-year-old earned his place in Elitloppet by winning the $82,000 Prins Daniels race in Gävle last year and from position first over, driver Örjan Kihlström had everything under control at Solvalla on Wednesday night, which mean that Sorbet will participate in Elitloppet in 2020.

The $72,750 Copenhagen Cup over 1.3 miles is scheduled at Charlottenlund racetrack in Copenhagen on Sunday and International Trot winner Zacon Gio (Ruty Grif) chases his 14th consecutive win when he leaves Italy for a trip north, to Denmark.

The Copenhagen Cup has gathered a nice field despite the reduced purse due to COVID-19 situation and Italy really parades the troops since Vitruvio and Alessandro Gocciadoro will try to capture another big trophy in Scandinavia.

Vitruvio had a great summer 2019 when he won two of the biggest races in Norway, Oslo Grand Prix at Bjerke racetrack and Ulf Thoresen Grand International at Jarlsberg racetrack.