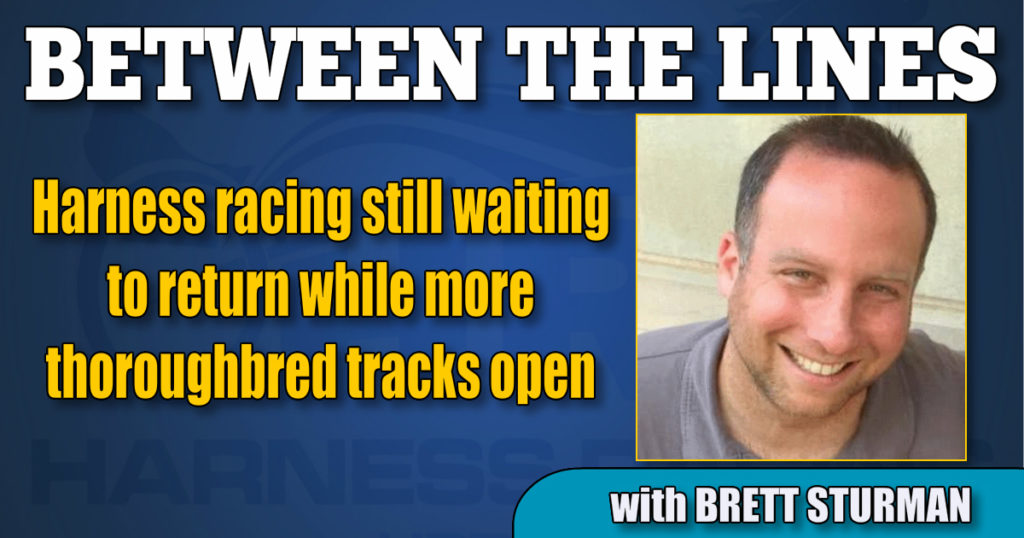 The biggest standardbred tracks are hampered by being in states hardest hit by COVID-19 or facing tougher lockdown rules by their governors.

Despite continuing best efforts, harness racing has failed to gain the same traction that its thoroughbred counterparts have achieved in recent weeks.

While harness racing has been shut down entirely since March, major thoroughbred meets have been ongoing in Florida and Arkansas, with smaller tracks conducting racing in Oklahoma and Nebraska, of all places. Now, a slew of additional thoroughbred tracks are scheduled to open in the coming weeks, most notably Churchill Downs starting next weekend. But nothing, yet, has been solidified for harness racing.

There are many different reasons for that, with the first being related to geography. This time of year, harness racing is typically in full swing across New York, New Jersey and Pennsylvania. As most know, New York and New Jersey have been two of the states hardest hit by COVID-19. And like those two states, neighboring Pennsylvania remains to have one of the more stringent requirements around its shutdown. The thoroughbred tracks that reside in the jurisdictions mentioned above, have either not felt the impact that the Mid-Atlantic states have, or are states that have governors that have not implemented the most dramatic sets of restrictive measures.

If Cal Expo’s meet had not already concluded due to it only being scheduled to the end of April, they may have been a candidate for the first harness track to resume operations. Being the last harness track standing, they were forced to close at the same time thoroughbred tracks Santa Anita and Golden Gate were shut down by county health boards. Now, both of those tracks are planning to open over the next week and one would presume that Cal Expo would have had the same opportunity had May racing been on their calendar. Rosecroft is in a similar position. Its meet was scheduled to run through May. Maryland track Laurel Park has expectations to re-open shortly, but by the time that does occur, the Rosecroft meet would have already concluded based on the calendar.

In Pennsylvania, home to The Meadows, Pocono Downs and Philadelphia, the state is still widely under a stay-at-home order. Most recently set to expire on May 8, Governor Wolf continued the order for counties that include Pocono and Chester (home of Harrah’s Philadelphia) through June 4 but did move the re-open level of Washington County – home of The Meadows – from red to yellow. The Pennsylvania Harness Horsemen’s Association has actively been working with horsemen’s groups, legislative leaders and lobbyists to move towards a safe re-opening of live racing once the stay-at-home order expires, so perhaps there may soon be movement with regards to The Meadows.

Just a few miles west of The Meadows is Ohio, another state populated with multiple harness racing tracks as well as the home of the United States Trotting Association. In that state, there’s been a growing frustration.

In a letter that was issued by the Ohio Harness Horsemen’s Association on Friday, it noted “Currently, the Associations, Racing Commission and all Permit Holders have been trying to work towards a final plan without success.” The letter continued, “The general tenor from the Permit Holders is a desire to continue down the path of uncertainty, without a definitive plan to resume racing, unless assurances and guarantees are received for all casinos and racing operations, racing or not.”

From this, it appears that the most difficult obstacle is coming to terms with the casinos that are linked to the tracks. While horse tracks across the country can re-open to live racing without spectators, casinos are not able to do the same and won’t be able to for some time. With casinos not open, it raises questions in the state as to how they’d be able to or want to support racing.

It’s a bit different in the thoroughbreds. There’s no question that slot and gaming revenues still go a long way to fund horse purses, but thoroughbred handle does generate revenue. At Oaklawn Park, for example, which just concluded the spectator-less meet while its casino was closed, the track handled over $40 million last Saturday. Doing a general back-of-napkin calculation, handle for that day alone could have resulted in around $10 million in revenue for the track. In harness racing, unfortunately the handle at most tracks fails to reach even the purses offered. Which is most likely the reason why Jeff Gural won’t open up racing at Tioga or Vernon without the casinos first opening – there wouldn’t be any money to fund the purses.

The other question is, what do race purses look like once racing does come back? No matter when racing returns in NY, NJ, PA or OH, some of the tracks will open back up before their casinos open. Provided that happens, it seems assured that purses would be sharply lower than they were pre-COVID. With the exception of Churchill Downs, all thoroughbred tracks slated to resume racing are seeing steep cuts to stakes purses, and in some cases stakes programs for the year are being scrapped altogether.

It was announced Friday that Northfield Park has canceled its signature races the Battle of Lake Erie and the Cleveland Trotting Classic. At the same time, PA announced postponement of sire stakes races scheduled to take place in early June. Like sire stakes that had previously been postponed from May, these races are planned to be rescheduled later in the year, but, obviously, the further the shutdown goes the greater the risk to the stakes. The same holds true for postponed stakes thus far at tracks across other states as well as into Canada.

Good news was received yesterday in Indiana as Harrah’s Hoosier Park announced it will begin the process of opening its barn area on Monday after receiving approval from the Indiana Horse Racing Commission. This bodes well for Harrah’s Philadelphia when Pennsylvania’s shutdown is lifted, as both harness racing properties are owned by Harrah’s.

In the meantime, horsepeople groups continue to work as diligently as possible towards track re-openings, but it remains a slower than desired process.