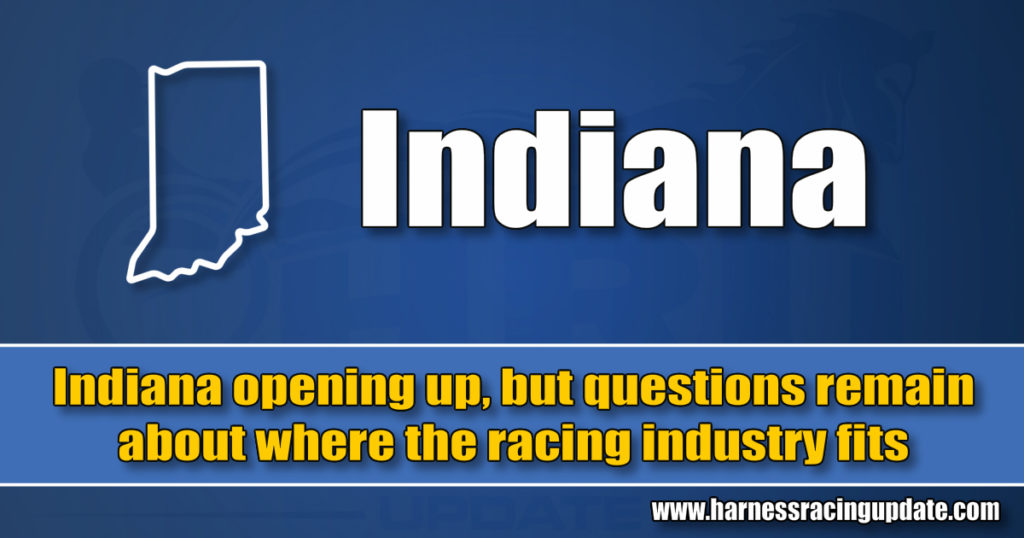 Indiana opening up, but questions remain about where the racing industry fits

The COVID-19 pandemic has created a great deal of uncertainty in the racing industry, particularly with plans to return to action. Horsepeople and industry leaders in Indiana have awaited a date to point toward as stay-at-home orders were repeatedly extended. Friday afternoon, Governor Eric Holcomb unveiled his plan to reopen Indiana, but the measures leave the racing industry seeking further clarification.

According to Holcomb’s five-stage plan, billed as “Back On Track Indiana”, the state will slowly lift restrictions between now and July 4. There are milestones set for each stage. However, those in the racing industry were left guessing Friday as to just where Harrah’s Hoosier Park and thoroughbred track Indiana Grand fit into the roadmap. The only time racing and/or gaming are defined in the plan is in Stage 2 (May 4-23) where casino operations are noted as remaining closed.

The question lies in how the state defines Hoosier Park and harness racing, as they are not identified outright in the plan. If the racetrack is categorized as an “entertainment business,” it could open at 50 per cent capacity beginning June 16 as part of Stage 4. However, if harness racing is deemed a sports event, for example, Hoosier Park would remain closed in Stage 4 and would open instead on July 4 as part of the fifth and final stage. Jessica Barnes, director of racing and breed development for the Indiana Horse Racing Commission, said that the regulatory agency has reached out to the governor’s office for clarification on Hoosier Park and Indiana Grand opening. They have yet to receive a response.

Under the governor’s plan, fairs are part of Stage 5 and will not open until July 4. The current Indiana Sired Fair Circuit schedule calls for nine programs leading up to that date. Fair championships are currently slated for mid-August at the Indiana State Fairgrounds, just over a month after the proposed opening.

Regardless of whether racing can begin June 16 or July 4, there is much work to do in the interim. Barnes explained that stakeholders have to address many issues. Some of the items to consider are 2020 program budgets and event schedules, updated racing calendars on the pari-mutuel and fair circuits, and when horses can ship in to Hoosier Park and the track can conduct qualifiers. Opening the casinos at Hoosier Park and Indiana Grand is also crucial, as revenue from those operations play a big part in funding the industry. The question is not whether there will be change this season, but to what extent the changes reshape racing.

“A lot of planning will take place once we get answers,” said Barnes, who has fielded calls nonstop since Friday’s announcement. “Everybody is waiting to get some guidance before doing anything.”