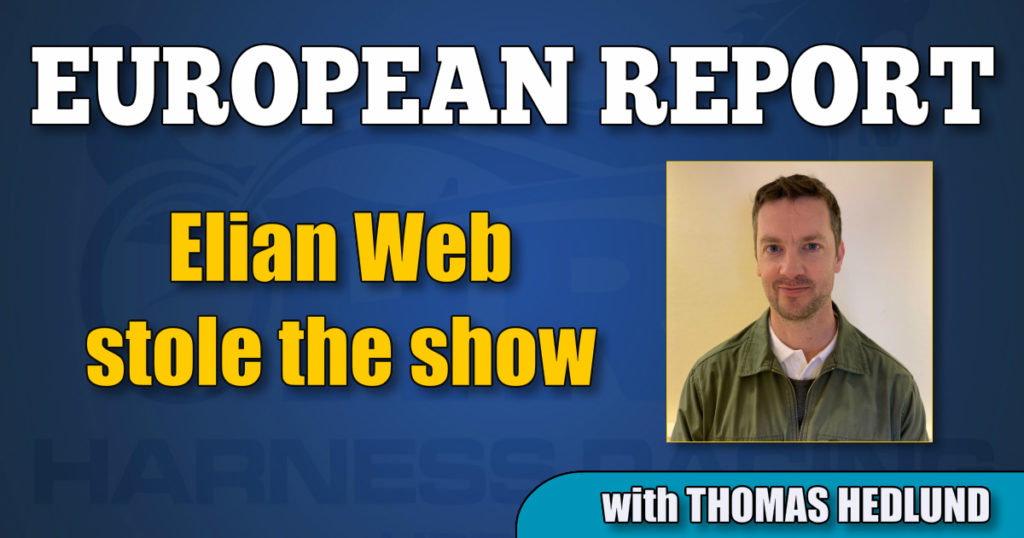 The $199,000 final of Paralympiatravet at Åby was predicted to be a sparkling story where many horses would show their speed from the start and where the pace in the race would be spectacular.

But predictions don’t always become truth in harness racing and when inside horse Disco Volante made a break before the car left the field of 10 horses, Finnish star Elian Web (Like A Prayer) quite easily took the lead from Cyber Lane.

Jorma Kontio, the winningest driver in the northern European countries, was allowed to let Elian Web trot as slow as he could in front and when the field hit the first kilometer, the mile rate showed a slow 1:59.4 mark. For a race with the conditions given, it felt like the outcome was set already with a lap to go. The only interesting thing, especially at Åby, is that the track offers two open stretches and Cyber Lane, who sat in the pocket, is a very quick finisher, just like Billie de Montfort, who was placed third on the inside by Björn Goop.

Attacks three wide cost too much when the pace was higher during the last kilometer and it was clear that the trophy would go to one of the horses racing on the inside. Elian Web, trained by Katja Melkko, is very hard to pass when he gets the lead and the 8-year-old gelding dosen’t have to apologize for the victory in a mile rate of 1:56.1.

Cyber Lane got close in the finish and claimed the silver ahead of Billie de Montfort.

Elian Web made his 64th start on Saturday afternoon and took his 26th victory. The son of Like A Prayer began his career as a 2-year-old and won the $269,000 Derby in Finland 2016. Since then, Elian Web has been counted as one of the best trotters in Finland and the triumph at Åby yesterday showed that Finland stand strong in the business. Elian Web also received a ticket to Elitloppet after the great victory.

Four-year-old Muscle Hill son Green Manalishi drew a lot of interest when eliminations for $199,000 Kungapokalen were held at Åby on Friday night. And the Courant Stable owned horse showed that he will be one of the hottest objects in the final at Åby on May 9, since he made a strong effort from position outside the leader in his debut in Europe. Green Manalishi, driven by Björn Goop, couldn’t defend the lead from post one, but Goop quickly found position in second line and when a kilometer remained, Green Manalishi sat outside leader Upset Face.

American-bred Click Bait (Cantab Hall—Fun At Parties) made an upset effort for Örjan Kihlström when the duo disarmed heavy favorite Power in the first heat.

Better known Osterc (Cantab Hall-Oh Oh Hereshecomes) made his third start in Sweden and took a wire to wire win for Björn Goop and the field is set for the final in two weeks.