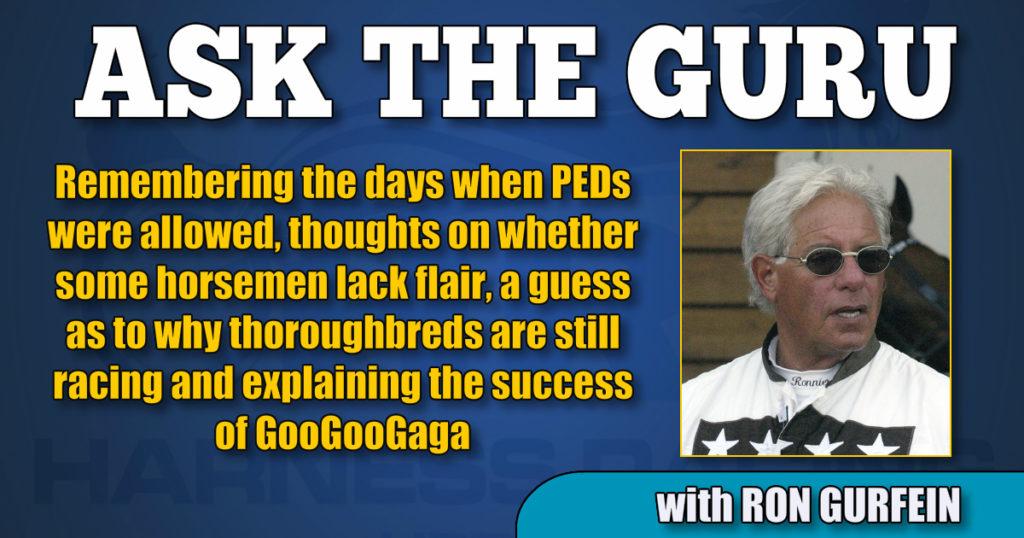 Remembering the days when PEDs were allowed, thoughts on whether some horsemen lack flair, a guess as to why thoroughbreds are still racing and explaining the success of GooGooGaga

Tidbits: BEWARE of Greeks bearing gifts? Maybe. Of hospitals opening prematurely for elective surgery? For sure.

For example, just last week we lost a great man and leader in our sport. Although if you read most of the obituaries you would never know the whole truth. Phil Langley went into the hospital for by-pass surgery and contracted COVID-19 while a patient. His subsequent passing may not have been solely caused by Covid-19, but it may well have been a contributing factor.

I was never a fancier of anyone putting a knife in me for any reason. A few months from my 80th birthday, everything in my body was there the day I was born with the exception of one tooth implant.

Please listen to an old fool. If you need elective surgery make the appointment the day after Yankee Stadium has 50,000 fans in attendance or Madison Square Garden has 20,000. Better to be safe than sorry.

The public airing of ill feeling initiated by Paul Fontaine against Joe Faraldo was a total ridiculous waste of time. If you feel the need to air your dirty laundry be a man and call the guy with your problem, don’t insult him in an open forum.

I am not going to get into innocence or guilt in any matter as am tired of being attacked. But this still is America. We stand by the law that states: innocent until proven guilty. The fact a man of Joe Faraldo’s stature should be asked to resign because he had horses with a man not proven guilty of anything is a sin.

I know that everyone is not an animal lover, but I will say that the existence of my two Foxhounds (Ruby and Stella) and my two cats (Jax and Ike) have truly made my existence more pleasurable during this time of isolation.

All four are rescue animals and I would suggest that if you are on the verge of psychological crisis you consider saving an animal. I promise a new addition will change the entire program of your lifestyle for the better.

Peaky Blinders season 4 was exceptional. If you got a little bored in season 3 as I did, skip to 4. It’s amazing.

I have not read a new book worthy of suggesting as a great read in a year but I did read an older novel that I loved. The Charm School by Nelson DeMille. The finale is spectacular.

Some good news. The ride north will be dirt cheap. Gas prices are under $1 in Georgia, South Carolina and Kentucky. FYI the cheapest gas in the world is in Venezuela $0.02 (two cents) per gallon.

I have been a Miami Dolphin fan for 40 years, but I must admit the Florida Patriots. (Tampa Bucs) are getting stronger by the day. Brady and Gronc are a team by themselves.

Rich Williams asks: We always hear about drug trainers in the U.S. I see horses going to Europe and Canada and stepping up big time. One even came from your barn. Can you explain Delicious, Propulsion and Musical Rhythm?

To begin with, all of the above were in great form when they were sold. Delicious came off a 1:52 victory over Maven, Musical Victory won a non-winners of five at Pocono Downs in 1:56 and Propulsion won four of his last five starts winning in 1:52, last quarter in 26 seconds.

On top of that, the new trainers were both world class conditioners that I certainly would not consider drug men. Musical Rhythm went to Benoit Baillargeon, and Delicious and Propulsion went to Daniel Reden.

All three horses had good pedigree and many horses radically improve with age. Propulsion was a $350,000 yearling who obviously had problems early on. He didn’t make a start for money at 2 and only had eight starts at 3 so he truly had a right to be on the upswing.

Delicious was always a good filly and she was lightly staked and I raced her in easy company at 2 and 3 as she was so small. She had a major upside. I begged Jerry Silva to protect her to $200,000 at Harrisburg because I was sure the best was yet to come. Needless to say they never made a bid and she only brought half that amount.

Musical Rhythm is another story. Benoit certainly did a wonderful training job and maybe just a new home was enough to make the improvement. All the foals of Musical Victory were either mares or geldings. Musical Rhythm was the only stallion and since all his brothers were gelded it’s make me think he may have been a bit fussy and the change of scenery had a positive effect.

Tony Alagna trained the other two and he just won three Breeders Crowns last fall so I sincerely doubt that the aforementioned missed a thing.

Paul London asks: GooGooGaga has become a dominant sire in Sweden. Why so much success in Europe and none here? Maybe a pacing bred trotter is the way to go.

Basically, he was unsupported in the U.S. He was bred to only 11 mares in his last season in America and their quality was not near to what he was bred to in Sweden.

The two top 3-year-old horses he had in Sweden were out of good mares. One was out of Dreams (also the name of my favorite Italian white wine from Fruili) a Victory Dream mare from the great Nan’s Catch and the other out of a French mare Orlando Vici.

Many great trotters pace. If you watch the replay of the Hambletonian that Mack Lobell won he paced right after the wire. Self Possessed switched to the pace in the middle of the stretch in the Beacon Course. My good mare Franconia always paced to the gate. It’s not unusual at all. My thanks to my friend Lina Alm for assistance with this question.

Bobby Short asks: I am your age. Why when we started in the business did we not hear of drug trainers like we do today?

I love this question because the answer is so simple. I will take a wildly educated guess that 80 per cent of the PEDs from when I started in the sport in the 1960s were perfectly legal. To give you some idea, if someone said I could race on the Grand Circuit tomorrow but with the 1960 guidelines and everyone else will have to be under the 2020 rules I am certain if I had decent stock I would be Trainer of the Year.

Today’s trainers are not permitted anabolic steroids, not allowed any cortisone based drugs. Those two alone are more than enough to give me a ridiculous edge.

I certainly don’t demean the great names of yesteryear, but I am not naive enough to think that Dancer and Haughton didn’t have Dr. Steele or Dr. Brennan have free reign on their barn.

I was a firm believer in Equipoise, perfectly legal and it had a profound effect on the strength and endurance of the horse. I won many races because of the performance-enhancing qualities of the steroid. Unfortunately, training Grand Circuit type horses it was not advisable as it would compromise fertility.

I will not name names but I know for certain that many Grand Circuit outfits’ horses lived on weekly doses of anabolic steroids.

Markku Vartiainen (trainer and good friend from Paris) asks: Why is it that thoroughbred horses are racing and standardbreds are not?

I really can’t say for sure, but I will guess that runners don’t have to warm up and they are not herded together in a cluttered environment i.e.: a PADDOCK.

The thoroughbred can come from the barn to the saddling area all in open air and then race providing ample room for social distancing.

Also TVG is a major format for wagering on the runners and are basically pathetic when it comes to knowledgeable information on our sport. With no fans in the stand and casinos closed we would have an uphill battle unless it was a major venue like the Meadowlands, and I assume they will be the first back on track.

Gural and company will conceive a way to race that supports social distancing.

Tom Santoro asks: When you watch a driver/trainer interview do you wish they had more flair? Example: Campbell and LaChance were technical but lacking something. Tetrick seems bashful and bored. Coleman is way too forthright. Erv Miller sounds like he should be teaching a dry wall class. You are right when you say Gingras is intelligent and a good speaker for the game.

Picky, picky, picky. It is not easy to do television for the average person. Before you criticize CONSIDER THE SOURCE.

Most of the trainers and drivers grew up where there were more cows than people.

I personally did some television when I was 11 years old and I still think I was awful when I started doing it at the Meadowlands in the 1980s. It took me years to become comfortable with a microphone in my hand. Now I love it.

I really think you are micro-managing your thought process. I really disagree when it comes to John Campbell. Is he exciting with the mic in his hand? No. However, he is very bright and very professional delivering a story or a message. I would give him very high marks as a public speaker.

As for Michel Lachance, English is his second language and I think, that said, he is excellent on camera. He was training and driving horses at the age we were in high school. Erv Miller is a quiet Amish man, but highly intelligent. I would guess that he was in his 40s before he ever appeared on camera.

Now that I have shot all your theories to hell, don’t bail on me, your questions always evoke interest.

Thank so much for all the kind words. Please keep the questions coming in and have a wonderful week…STAY SAFE.