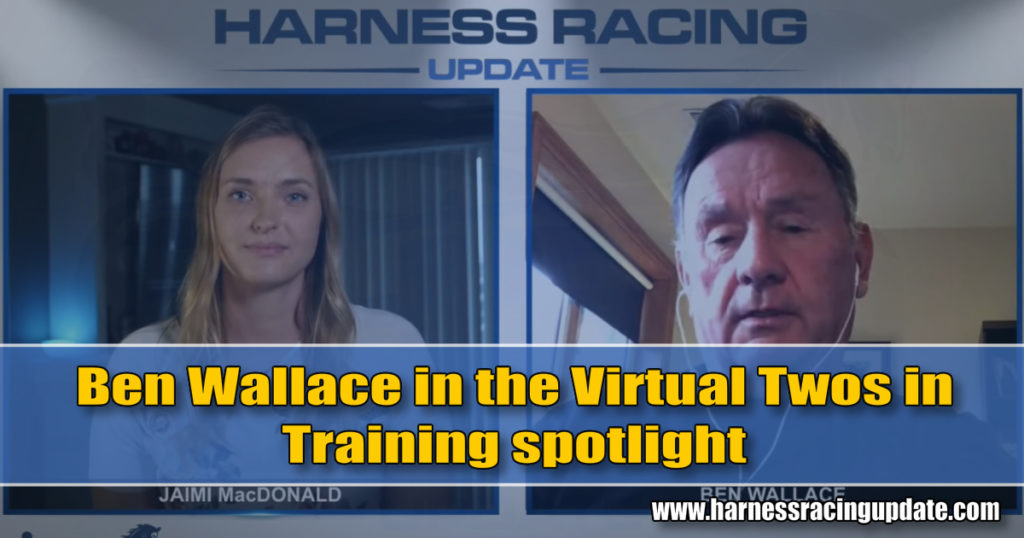 Ben Wallace in the HRU Twos in Training spotlight

The veteran trainer talked about his stellar career, his two promising 2-year-olds – one by He’s Watching and another by Betterthancheddar – and the recent announcement that he will be inducted into the Canadian Horse Racing Hall of Fame this year.

HRU’s Virtual Twos in Training videos series has added trainer Ben Wallace as the third installment of its live interviews, this one conducted by Jaimi MacDonald.

Wallace talked about his stellar career, his two promising 2-year-olds – one by He’s Watching and another by Betterthancheddar – some old favorite and the recent announcement that he will be inducted into the Canadian Horse Racing Hall of Fame this year.

He will also fielded a few questions from viewers that were emailed to HRU in advance of the show.

Thank you to Woodbine and Blue Chip Farms for sponsoring the Wallace video.

HRU intends to feature a new live interview with a trainer every Thursday, Saturday and Monday evening. Next up is trainer Ron Burke on Thursday, April 23 at 7 p.m. EDT.

Finally, we need your help to reach 1,000 YouTube subscribers.

If you haven’t subscribed – for free – to HRU’s YouTube channel, we would appreciate it very much if you would.

We currently sit at just over 800 subscribers. The way YouTube works is once you reach 1,000 subscribers it allows HRU to generate some income from YouTube. We want to use that money to make more – and better – videos for you.

If you like our previous Twos in Training videos, reports from the two major yearling sales or the new Virtual Twos in Training videos featuring Marcus Melander, Carter Pinske and Ben Wallace – with many more trainers to come in the weeks ahead – we would appreciate you taking a minute to subscribe to our YouTube channel.

Thank you very much from all of us at HRU.